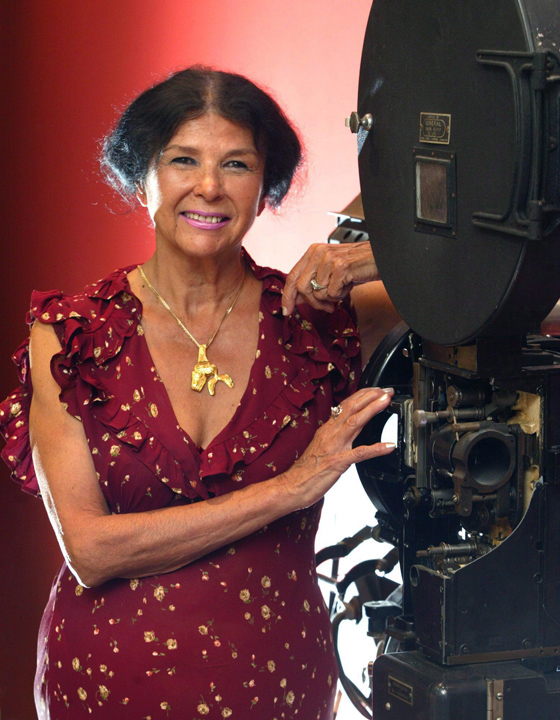 A member of the Abenaki Nation, Obomsawin, whose last name means “pathfinder,” returned with her family to the Odanak reserve near Sorel, Quebec, when she was six months old. Her father was a guide and a medicine maker, and her mother ran a boarding house. Her time on the reserve was idyllic; she delivered her aunt’s homemade bread and sang with abandon in her aunt’s rocking chair.

She moved with her family from the reserve to Trois-Rivières when she was nine years old. Though the transition was difficult, her father’s death from tuberculosis when she was 12 pushed Obomsawin to rebel against the bullying and the promotion of European cultural superiority in school. Leaving Trois-Rivières at age 22, she spent time learning English in Florida before settling in Montreal in the late 1950s.

Following her debut as a singer at a concert at New York City’s Town Hall in 1960, Alanis Obomsawin made appearances on reserves, in schools and prisons, at music festivals and on television. In 1966, she was profiled on the CBC program Telescope for her activism and “near superhuman” efforts to fund — through donations, concerts and lectures — a swimming pool for the Odanak reserve after the local river was deemed too polluted.

She has performed throughout North America and Europe, self-accompanied on a hand-drum or rattle. Her repertoire includes traditional Aboriginal songs, as well as stories in English and French. Her 1984 album, Bush Lady, is perhaps the best example of her musical style. Accompanied by the hand-drum, and occasionally flute, oboe, violin and cello, Obomsawin sings and tells stories in several languages. In “Mother of Many Children,” a track of intermixed chanting and French spoken word, she begins in English: “From earth, from water, our people grew to love each other in this manner. For in all our languages, there is no he, or she. We are the children of the earth, and of the sea.”

Though primarily known for her filmmaking, Obomsawin has not abandoned her performance roots. She has appeared at the Guelph Spring Festival, theNational Arts Centre in Ottawa, the Place des Arts in Montreal, the Mariposa Folk Festival (where she was coordinator of Aboriginal peoples' programming from 1970 to 1976) and at WOMAD (Harbourfront, 1990). She also appeared regularly for several years in the 1970s on the Canadian version of the children's program Sesame Street.

Obomsawin gave her first concert in 30 years when she sang Bush Lady in its entirety at Le Guess Who? Festival in Utrecht, Netherlands, in November 2017. She received a standing ovation from the crowd of 800 people, and later told the Montreal Gazette, “When they all stood up, I thought I was going to pass out. I was so touched. I just couldn’t imagine that they would like it so much.”

Bush Lady was re-released on vinyl, CD and digital formats by Montreal-based Constellation Records in June 2018 to mark the album’s 30th anniversary. Obomsawin also performed the album at Montreal’s Monument-National on 28 September 2018 as part of the POP Montreal music festival. She received many other requests to perform but has done so selectively. “It’s not an easy thing for me,” she told the Gazette in September 2018. “What I sing about is not easy. I feel every word. I’m always worried I might cry.”

After noticing her in the CBC Telescope feature in 1966, Wolf Koenig and Bob Verrall, producers at the National Film Board (NFB), hired Obomsawin as a consultant on projects that related to First Nations peoples. In 1971, she directed her first film, Christmas at Moose Factory, and in 1977 she became a permanent staff member at the NFB.

Committed to redressing the invisibility of Indigenous peoples, Alanis Obomsawin’s filmmaking style resides in the unique ability to pair Indigenous oral traditions with methods of documentary cinema. Amisk and Mother of Many Children, produced and directed in 1977, combine interviews with music, dance, drawings and archival images to validate the history of Indigenous peoples across Canada. Of her films on young people, Richard Cardinal: Cry from a Diary of a Métis Child (1986) is the best-known, and perhaps the most striking. A dramatic account of a young boy’s suicide, it led to a government report on social services for Indigenous foster children in Alberta, though little has been done to alleviate such problems (see also Suicide Among Indigenous Peoples in Canada).

Obomsawin’s films have documented the work of Indigenous organizations to help young people overcome alcohol and drug abuse (Poundmaker's Lodge: A Healing Place, 1987), and provide services to homeless Indigenous peoples in Montreal (No Address, 1988.) Her films on the struggles of the Mi'kmaq over fishing rights (Incident at Restigouche, 1984) and the Mohawk-government standoff at Oka in 1990 (Kanehsatake: 270 Years of Resistance, 1993) have been widely acclaimed, and have brought Obomsawin national and international recognition.

Obomsawin directed The Wild Rice Harvest, Kenora (1979) and June in Povungnituk (1980) for the NFB’s Canada Vignettes series, and a short dramatic film, Walker (1991). She has examined individual stories ( My Name Is Kahentiiosta, 1995; Spudwrench, 1997) and commented on the long-term effects of specific incidents during the events of the 1990 Oka Crisis (Rocks at Whiskey Trench, 2000), allowing viewers to see multiple angles of a complex and evolving story.

Obomsawin re-examined some of the previous themes in her work on the subject of Indigenous fishing rights in Canada in Is the Crown at War with Us? (2002). She followed that documentary by focusing on the rights of Aboriginal peoples to manage and make use of natural resources on their ancestral land in Our Nationhood (2003). She also completed two films about the people of Odanak: Waban-Aki: People from Where the Sun Rises (2006); and Gene Boy Came Home (2007). The latter is about war veteran Eugene “Gene Boy” Benedict’s nearly two-year tour in the Vietnam War and his struggle to get back to Odanak in the years following his service.

Obomsawin continues to make films into her eighties, including Hi-Ho Mistahey! (2013), which focuses on the Indigenous education initiative Shannen’s Dream, and Trick or Treaty? (2014), which profiles the struggles of Indigenous leaders in attempting to negotiate with the federal government. Trick or Treaty? was selected to screen in the Masters program at the Toronto International Film Festival (TIFF) in September 2014, making Obomsawin the first Indigenous filmmaker to receive that honour. The film was voted runner-up for the People’s Choice Documentary Award at TIFF and was nominated for a Canadian Screen Award for best feature documentary.

Obomsawin’s hour-long NFB film The People of the Kattawapiskak River (2012), which explores the poverty-stricken conditions of the Kattawapiskak Cree in Northern Ontario, won the Donald Brittain Award for Best Social/Political Documentary Program at the Canadian Screen Awards in 2014 (see also Donald Brittain). Her 2016 documentary, We Can’t Make the Same Mistake Twice, chronicles a nine-year human rights battle alleging that the federal government under-funded Indigenous children in Canada.  The film had its world premiere at TIFF and garnered wide critical acclaim.

Alanis Obomsawin is also a prolific visual artist known for her engravings and prints. The Montreal Museum of Fine Arts held an exhibition of about 25 of her prints, along with handmade straw and grass objects by members of the Abenaki nation, from 21 May to 25 August 2019.

Alanis Obomsawin has long been an active force in the country’s artistic community, serving on the boards of many organizations. She was a board member of the NFB’s Indigenous unit, Studio One, and an advisor for New Initiatives in Film, a program for women of colour and Indigenous women in the NFB’s women’s unit, Studio D. She has served on the board of directors for Aboriginal Voices, the Aboriginal Peoples Television Network (APTN), the Public Broadcasting Association of Quebec, National Geographic International and the Public Broadcasting System (PBS) in Vermont. She has also chaired the board of directors of the Native Women’s Shelter of Montreal and served on the Canada Council’s First Peoples Advisory Board.

Alanis Obomsawin is a revered figure among documentary filmmakers and has received numerous honours in both the United States and Canada. She was made a Member of the  Order of Canada in 1983, promoted to Officer in 2001 and again to Companion (Canada's highest civilian honour) in 2019. Her artistic accomplishments, her work with young Indigenous people and her activism on behalf of the rights of Indigenous peoples have earned her the Governor General’s Award (1983), a National Aboriginal Achievement Award (1994) and more than half a dozen honorary degrees. She was also granted an Honorary Fellowship at the Ontario College of Art and Design in 1994 and was an Honorary Fellow of the Royal Society of Canada in 2013.

In 2001, she received a Governor General's Visual and Media Arts Award and became the first non-sociologist/anthropologist to win the Outstanding Contributions Award from the Canadian Sociology and Anthropology Association (see also: Sociology; Anthropology). In 2004, the International Documentary Association honoured her with its Pioneer Award, presented annually to “an individual who has made an indelible impression on the evolving art and craft of nonfiction filmmaking.” That same year, the imagineNATIVE Film + Media Arts Festival in Toronto created an annual documentary award in her honour.

May 2008 saw another award from the Governor General's office with the Performing Arts Award for Lifetime Artistic Achievement. Obamsawin was also the subject of a two-week special retrospective at the Museum of Modern Art in New York the same month. Also in 2008, she was part of the Elders-in-Residence program at the University of British Columbia’s First Nations House of Learning. In 2009, she was awarded the Outstanding Achievement Award by the Hot Docs Canadian International Documentary Film Festival. In 2012, she returned to the University of British Columbia as Artist in Residence for the Film Production program.

In 2014, Obomsawin was honoured with the Canadian Screen Awards’ Humanitarian Award for her “exceptional contributions to community and public service.” In 2016, she received the Toronto Film Critics Association’s Technicolor Clyde Gilmour Award, which recognizes filmmakers “whose work has in some way enriched the understanding and appreciation of film in their native country.” The prize required her to choose an emerging filmmaker to receive $50,000 in post-production goods and services from Technicolor; she selected Métis and Cree artist Amanda Strong. Also that year, Obomsawin was named a Grand Officer of the National Order of Québec and received the Prix Albert-Tessier, the province’s highest honour in cinema (see also Prix du Québec).

On 5 November 2018, a mural honouring Obomsawin was unveiled at the corner of Lincoln and Atwater Avenues in Montreal, near Obomsawin’s home.  Designed by Atikamekw artist Meky Ottawa, the mural is a composite image of Obomsawin performing at the Mariposa Folk Festival in 1970 and a photograph of her playing with children at a residential school during the filming of her 1971 documentary Christmas at Moose Factory.  “All those children now are all grandparents,” Obomsawin told CBC News. “So I hope that they get to come and see it.”