The Arts and Letters Club of Toronto. Club for men and (beginning in 1985) women engaged in or interested in the arts (literature, architecture, music, painting, stage, and sculpture). It was founded in 1908 largely through the efforts of Augustus Bridle. A performance 23 Mar 1908 by the Toronto String Quartette at the club's first meeting established the place of music in its activities. Of some 103 charter members, 17 were from the field of music: J.H. Anger, Frank Blachford, Bridle, Hector Charlesworth, F.H. Coombs, H.C. Cox Albert E. David, Dr T.A. Davies, W.O. Forsyth, J.G. Galloway, Fred Killmaster, R.S.V. Pigott, Richard Tattersall, F.H. Torrington, J.D.A. Tripp, A.S. Vogt, and Frank Welsman.

First housed in a garret opposite the King Edward Hotel, the club moved in 1910 to the County Court Building and in 1920 to St George's Hall, which it purchased in 1985. In 1912 a constitution (set to music - B625 - by Healey Willan in 1922 and performed annually thereafter) was adopted and in 1920 the club was incorporated. Musicians among the club's presidents have been Bridle 1913-4, Willan 1922-3, Ernest MacMillan 1930-2, Ettore Mazzoleni 1945-7, David Ouchterlony 1959-61, and David Franco 1986-8. In 1910 Jan Hambourg (accompanied by Welsman) gave his first Toronto recital for the club. The annual Boar's Head festivities (claimed to be the oldest in North America) were begun at Christmas 1910. Willan added carols (1921, B422) and the Choral March (1922, B626) to the ceremony, which was conducted by MacMillan and Reginald Stewart on later occasions. MacMillan performed 1936-68 improvisations on "The First Nowel," a tradition carried on by the organists Stanley King and Edward F. Moroney.

The club was the site of informal performances by amateur and professional musicians (often jointly until the AF of M forbade such interaction) and concerts by the Hambourg Trio, the Academy String Quartet, the Adanac Quartet, and the New World Chamber Orchestra (all of these groups being composed of club members) and by many guest artists. The Canadian Academy of Music and the Toronto Chamber Music Society are but two organizations whose origins may be traced to the club's activities. The Chester Mysteries with Willan's incidental music (1919, B3) were presented by members in 1931 and repeated in 1933, 1942, 1943, 1951, and 1954. In 1934 St George's Hall was the site of weekly CRBC orchestral broadcasts. A spring revue, begun in 1930 by Napier Moore, continued annually until 1939, then sporadically (1941, 1945, 1948) until annual presentations were resumed in 1954. Book, lyrics, and music were prepared by members, including T.J. Crawford, Horace Lapp, MacMillan, John Sidgwick, Frederick Silvester, and Harry Somers. Accompaniment, usually on two pianos, was provided by Reginald Godden and Scott Malcolm, Gordon Hallett and Clifford Poole, and others. A version of Theatre of Neptune, with incidental music (1954, B31) by Willan, was produced several times.

In 1944 Marcus Adeney, John Coulter, and Herman Voaden presented a report of the club's advisory board to the federal government's Turgeon Committee (for post-war reconstruction and re-establishment). This report had a direct bearing on the formation of the Canadian Music Council and the Canadian Arts Council (later CCA).

In 1980 the club held a month-long tribute to Willan on the centennial of his birth. In March 1981, in what was the final concert of his career, Godden performed the Goldberg Variations by Bach. By agreement with Les Amis Concerts, beginning in the mid-1980s, monthly performances of classical and contemporary music are given at the club, and piano, choral and organ recitals continue to be regular entertainments. 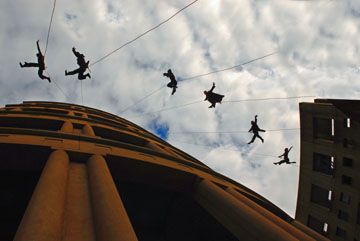