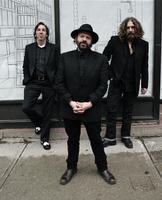 Blackie & The Rodeo Kings was initially conceived in 1996 as a tribute act to singer-songwriter Willie P. Bennett. By renewing interest in Bennett and other Canadian songwriters, Colin Linden, Stephen Fearing and Tom Wilson believed they would also gain a wider audience for their solo careers.

Before establishing Blackie and the Rodeo Kings, blues guitarist Colin Linden (born Toronto, 16 Apr 1960) was best known for his work as a musician and producer for Bruce Cockburn, Colin James and Lori Yates. During the 1970s, Linden participated in the West Coast folk scene where he met Tom Wilson (born Hamilton, ON. 9 Jun 1959) and Stephen Fearing (born Vancouver 12 Jan 1963). Linden worked as a backup musician during Bruce Cockburn's 1991, and Fearing was the opening act for the tour.

During the mid 1990s, Tom Wilson was best known for his work with David Wiffen, Fred Eaglesmith, and Willie P. Bennett and the rock groups Junkhouse and The Florida Razors. Wilson and Linden both performed in the festival and coffeehouse circuit throughout southern Ontario before establishing Blackie & The Rodeo Kings. Over the years the accompanists John Dymond on bass, Richard Bell on piano and Gary Craig on drums and percussion also played with the Blackie and the Rodeo Kings.

The trio's first CD, High or Hurtin' was a tribute to Willie Bennett and featured original compositions and songs written by Bennett. Their next CD, Kings of Love (1999), included more songs by Bennett, Fred Eaglesmith, and John Martyn in addition to original contributions from the members, and by 2006, Let's Frolic! comprised all original material. In 2011 Blackie and the Rodeo Kings produced the collaborative album Kings and Queens which featured duets with some of the strongest female singers in the industry including Roseanne Cash, Pam Tillis, Janiva Magness, Emmylou Harris, Holly Cole and Serena Ryder.

Swinging From The Chains Of Love. 2009. Maple Music