Langford, who was born in Weymouth, Nova Scotia, has often been listed among the best heavyweights of all time. 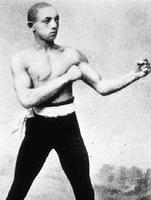 George Dixon, is considered the greatest bantamweight boxer ever. He won the bantamweight title in London in 1890 and the featherweight championship the next year. 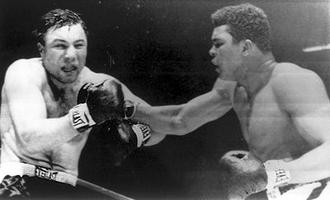 Chuvalo takes a punch from Mohammed Ali in a heavyweight match held in 1966 in Toronto (Canapress).

Burns was the only Canadian to win the world heavyweight championship (courtesy Library and Archives Canada/C-14092).
PreviousNext

Boxing is a contest between two opponents wearing padded gloves who attempt to win by rendering their opponents unable to continue, or by winning a judge's decision at the end of a prearranged number of rounds. Boxers may hit only with their fists and from the waist up.

Boxing as a sport was introduced by the Greeks in the Olympic Games about 686 BC.

The first bouts in Canada were "bareknuckle" fights. Gloves began appearing regularly around the turn of the century, primarily to protect the fists of the boxer rather than the fighter being hit. It was not unusual for Canadian bouts before 1900 to be scheduled for 40 rounds. The early bouts with gloves were said to be governed by the Marquis of Queensbury rules, though many think that reference was made to the "Marquis" to give the sport respectability.

Early Canadian boxing was governed by each province, many of which outlawed its existence. It was frequently claimed that police interfered only when bouts were not going the way the promoters intended. The military, especially in garrison towns such as Halifax, could hold bouts; but with rare exceptions, such as the "Gentlemen's Sparring Club of Ottawa" in the 1880s, promoted fights were thought to be "outlaw" events. Canadian boxing began its climb to respectability in the 1890s.

Today, despite the controversy that surrounds the sport because of its violence, boxing draws large crowds in many Canadian cities. Most of its competitors have come from less affluent sections of big cities such as Vancouver, Toronto and Montréal and from poorer areas such as the Maritimes.

Sam Langford, who was born in Weymouth, NS, has often been listed among the best heavyweights of all time. As a lightweight he beat the renowned Joe Gans of the US. Though weighing only 71 kg, he boxed 15 rounds with 84 kg Jack Johnson but was denied a title fight. Another Halifax fighter, George Dixon, is considered the greatest bantamweight boxer ever. He won the bantamweight title in London in 1890 and the featherweight championship the next year. Tommy Burns from Hanover, Ontario, and Jimmy McLarnin from Vancouver have also been world champions.

Though never world champion, heavyweight George Chuvalo of Toronto held Canadian and Commonwealth titles and in a career in which he fought most of the great heavyweights was never knocked down. Yvon Durelle, "the fighting fisherman" from Baie Ste Anne, NB, fought Archie Moore twice for the light-heavyweight championship of the world. Durelle knocked Moore down 4 times in the first fight but lost in 11 rounds.

The Canadian Amateur Boxing Association oversees 10 provincial boxing associations and one from each of the territories. While most excellent Canadian amateurs eventually turn pro, many retain their amateur standing and aim for specific goals such as the Olympics or world amateur championships.

In 1987 Michael Olajide, Jr, lost a bout that would have given him the World Boxing Association title. Matthew Hilton of Montréal won the IBF Middleweight Title in October 1987, becoming the first Canadian world champion since Jackie Callura of Hamilton in 1943. Later in 1987, Donny Lalonde became the World Boxing Council light-heavyweight champion. Edmonton's Scott Olson won the International Boxing Organization's Flyweight Championship in 1997. Lennox Lewis, who returned to his native England after the 1988 Olympics, won the undisputed world heavyweight crown in 1999. In Canada, professional title bouts are governed by the Canadian Professional Boxing Federation, with local commissions controlling other professional boxing. 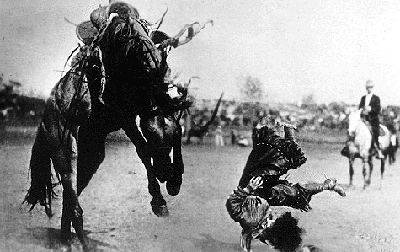