The Christian Brothers were founded in France by Jean-Baptiste de La Salle in 1680. Born in Reims in 1651, La Salle was from a privileged family, allowing him the opportunity to receive a classical education. In 1670, as a young aspirant to the priesthood, he enrolled in Paris’s famed Saint-Sulpice Seminary while simultaneously taking courses in academic theology at the Sorbonne. Later, at the University of Reims, he achieved a Bachelor of Theology in 1675, a Licentiate in Theology in 1678 and a Doctorate of Theology in 1680.

Following his ordination in 1678, La Salle began to address the hardship and insecurity pervasive in French society by opening free schools for the poor. He is now widely credited as a pedagogical pioneer because of his role in modernizing teaching techniques: in lieu of private tutoring, he introduced the “simultaneous method” whereby students of similar age and competency were taught collectively; he stressed the vernacular — rather than the more traditional Latin — as the language of instruction; and he founded technical schools to prepare boys for various trades. In 1680, he established a community of consecrated laymen he called the Institute of the Brothers of the Christian Schools. In Reims in 1687, he opened the first training centre for teachers in Europe. He died 7 April 1719, at the age of 68. Given his contributions to education, he was beatified in 1888, canonized in 1900 and named Patron Saint of Teachers in 1950.

Unlike their founder, Christian Brothers were not priests. La Salle argued that his congregation had a different, yet complementary, function: they would labour for the salvation of souls through Christian education; in helping to instill Catholic doctrine in the hearts and minds of youth, the Brothers would be valuable auxiliary servants to the clergy.

All Christian Religious Communities in the Catholic Church — male and female — take vows of poverty, chastity and obedience. The Christian Brothers also added a vow of stability, promising to remain steadfast in their commitment to the congregation, and a vow to teach the poor gratuitously. To distinguish themselves from priests and lay people, Brothers adopted new names at the end of their novitiate and wore long black robes accentuated by the addition of a white rabat — a piece of cloth that rested on the upper chest below the Roman collar. They also lived in shared residences called communities, usually adjacent to or near the associated school(s) in which they taught, with the number of community members varying according to the size of the school(s). Communities were overseen by directors, who were themselves part of the hierarchy of the order, which included visitors, assistants and the superior general.

Throughout the 18th century, the institute quickly expanded its membership, communities and schools, first across France and then elsewhere in Europe. In 1717, prominent Montreal-based fur trade merchant Francois Charon requested that the Christian Brothers come to New France. He thought that they might assist the Frères Hospitaliers de la Croix et de Saint-Joseph (Charon Brothers), a charitable organization he founded in 1699, by opening schools. However, this proposal never materialized, perhaps because of the great distance between France and its colonial outpost and the cost of sending and maintaining Brothers. In 1737, the Charon Brothers again requested to have the Christian Brothers come to Montreal. Two Brothers were sent there to study the feasibility of such a venture, but while negotiations seemed promising, this proposal also failed to come to fruition.

It would be another 100 years before the Christian Brothers finally established a permanent presence in Lower Canada. In 1837, at the behest of Bishop Jean-Jacques Lartigue and M. Joseph-Vincent Quiblier, superior of the Sulpicians in Montreal, four Brothers were sent to the city amidst the context of the Rebellion in Lower Canada. These men quickly founded the Saint-Laurent community and established their first school, École Saint-Laurent. While more Brothers arrived from France in the 1830s and 1840s, the order also sought to secure a Canadian-born cohort of members by starting a novitiate in 1838. This development facilitated school and community establishments (of varying degrees of longevity) in French Canada for decades. From the outset, Quebec was the heart of the Institute of the Brothers of the Christian Schools in North America. They had the most members, the most schools and a close affiliation with the Church hierarchy, allowing them to wield significant influence in the province until the Quiet Revolution of the 1960s. 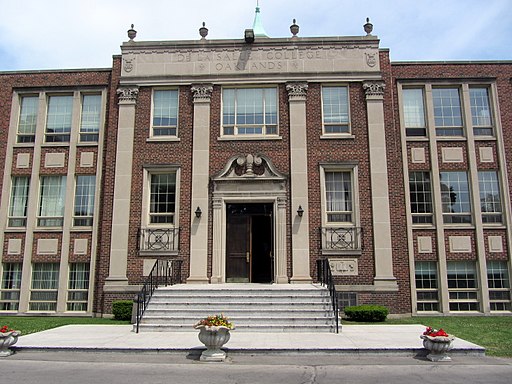 Outside Canada East and later Québec, short-lived communities and schools were established in the 19th century in Saint-Boniface, Manitoba, and in the Maritimes. In Canada West and later Ontario, a more permanent foothold emerged, particularly in urban centres such as Toronto and Ottawa. Around the turn of the 20th century, divisions between French and English-speaking Brothers in Canada were evident, particularly over the question of teaching qualifications. Nevertheless, new recruits were always joining, and new schools were regularly opened. By their centenary in 1937, there were 920 Brothers in Canada teaching nearly 35,000 pupils in 79 schools; another 220 Brothers took on administrative or training positions while 485 boys and young men were in one of the three stages of formation (juniorate, novitiate and scholasticate). By the early 1960s, there were about 1,300 Brothers in Quebec and Ontario.

Between their arrival and the 1960s, their program of studies changed from one that emphasized Catholic catechism and rudimentary academics to one that provided an extensive program of industrial and commercial subjects, humanities and sciences, university training and preparation for the religious life. Besides elementary schools, the Brothers established and taught in secondary schools, reformatories, industrial schools and universities. They also ran their own houses of formation, summer camps and overseas missionary schools. They founded or ran many famous institutions, including the Commercial Academy (1862) and l’École supérieure de commerce (1924) in Quebec City, with the latter becoming the Faculty of Commerce at Université Laval; Collège Mont-Saint-Louis (1888) in Montreal; St. John’s Industrial School (1895) and De La Salle College Oaklands (1931) in Toronto; and St. Joseph’s College at the University of Alberta in Edmonton (1927).

Members sometimes acted as school inspectors and held leadership positions in various academic and Catholic organizations. At the end of the academic year, Brothers often spent their summer months taking extra courses, obtaining university degrees, improving their teachers’ qualifications, learning languages or running summer school sessions. One of their most famous members was Frère Marie-Victorin, botanist, professor, proponent of French-Canadian nationalism and founder of the Montreal Botanical Gardens. Members also wrote textbooks on virtually every subject and the order secured a strong reputation for their teaching methods. However, they were also known to be stern disciplinarians, sometimes venturing into violent misconduct. Since the early 1990s, members from Ontario and Quebec have come under scrutiny, particularly for the physical and sexual abuse of boys at their Ontario-based reformatories.

Though the congregation was founded to exercise an educational ministry, they reserved a place for members who were not teachers. This small minority of non-teaching Brothers were officially categorized as Serving Brothers and primarily performed domestic tasks. In Canada, their roles were primarily as cooks, gardeners, handymen or dorm supervisors. While not usually possessing the educational training to be able to teach, they nevertheless lived with the Teaching Brothers and fulfilled all the duties of the religious life, including prayers, retreats and common exercises.

In the wake of the Second Vatican Council (1962–65), members of religious orders such as the Christian Brothers were asked to analyze their congregations’ goals, structures and customs. Henceforth, there was much greater freedom for individual members to choose their clothing, their names and their living arrangements, and there was a growing sense of freedom to question the hierarchy. The order underwent a rapid exodus of members and experienced a dearth in vocations. This development, alongside a growing secularization of Quebec’s education system, precipitated a dramatic decline in Brothers teaching in Canadian classrooms from which they have not recovered.

With numbers continuing to decline and educational activities restricted across North America, the hierarchy in Rome has done some organizational restructuring. In 2009, Ontario’s English-speaking Brothers were merged with their linguistic confreres in the eastern United States, forming the District of Eastern North America. Le District du Canada francophone includes all Brothers in Quebec as well as those from the city of Ottawa. This French-language district continues to be home to most Brothers in Canada. While the majority are retired, some continue to be engaged in social and pastoral work leading spirituality seminars, performing tutoring and conducting workshops in such areas as citizenship, leadership and anti-bullying education.

The Christian Brothers in Canada contributed greatly to a flourishing Catholic school system in Quebec and helped solidify Ontario’s separate school system. They were tied together by common religious affiliation, gender, vows, employment and residency. Their community life differed from most Canadian residents — Catholic and non-Catholic alike — in the 19th and 20th centuries. Joining this congregation was a unique option for Catholic men, providing an alternative to marriage and fatherhood, the priesthood or the single life.