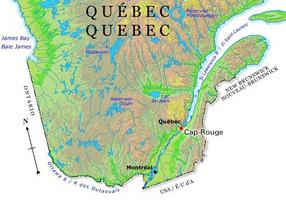 First set up as a municipality in 1872, Cap-Rouge takes its name from the red shale that makes up the surrounding cliffs and the cape that juts out into the St Lawrence. The old village centre was first settled by Jacques CARTIER from 1541 to 1543. Cap-Rouge was reborn as a settlement in the middle of the 17th century, when the area was given as a seigneury to Jean Juchereau. Early in the 19th century, the mouth of Rivière Cap-Rouge, like the coves at Sillery and Québec, became an important centre of the square timber and deal trade with Great Britain.

Cap-Rouge is foremost a residential suburb of Québec City. One of the key figures in its history is Father Léon PROVANCHER. His stay in Cap-Rouge, from 1872 to 1892, is recalled through an interpretation centre, the Maison-Léon-Provancher. Overhead towers the 55 m high and 1000 m long Canadian National Railway trestle bridge built between 1906 and 1912, a versatile monument to the railway engineers of the early 20th century.