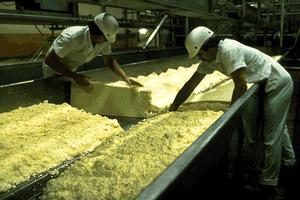 In Canada, 408,197 tonnes of cheese were produced in 2012; per capita consumption was 12.18 kg, consisting of 3.9 kg of cheddar, 7.54 kg of mozzarella and other specialty cheeses, and 0.74 kg of cottage cheese. Consumption has increased more than threefold since 1950, aided by a wider selection of cheese varieties and better merchandising, transportation, refrigeration and packaging. Cheese, a valuable source of protein, energy, vitamins and minerals, is a useful alternative to meat in the diet: e.g., cheddar is composed of approximately 26 per cent protein, 33 per cent fat and 36 per cent water; creamed cottage cheese, 12.5 per cent protein, 4.5 per cent fat and 79 per cent water. It takes about 10 litres of milk to make 1 kg of most varieties of cheese; most of the protein and fat in the milk go to the cheese.

Cheese was made for thousands of years as a means of preserving the valuable nutrients of milk. The first cheese was probably made from naturally soured milk, simply by putting that milk in a bag and allowing the whey to drain; the curd or cheese remained. Eventually, it was found that an extract from the fourth stomach of calves, kids or lambs could coagulate milk. This extract, called rennet, contains an enzyme called chymosin which coagulates the protein in milk; rennet has been used for centuries to make most of the cheeses that we know today. Canadian settlers made cheese for their own use or for sale at markets. The first factory in Canada specializing in making cheese from milk from surrounding farms was opened by Harvey Farrington in Oxford County, Canada West [Ontario], in 1864. An early cheese factory can be seen at Upper Canada Village near Morrisburg, Ontario. Such factories were small by today's standards, making approximately 100 to 500 kg of cheese per day.

Factories proliferated quickly, reaching a peak of 2300 cheese factories and 570 combined cheese and butter factories at the turn of the century. Exports of cheese, chiefly to England, played a major part in Canada's early economy; in the 4 decades from 1891, annual exports averaged 70 000 t with a high of 106 000 t in 1904. "Mammoth cheeses" were used for promotion, and aged Canadian cheddar gained a reputation for top quality and fine flavour, which it retains today. The largest cheese, the "Canadian Mite," weighed 10 t and was made in Perth, Ontario. It was displayed at the World's Columbian Exposition in Chicago in 1893 and then in London, England, where eventually it was cut up and sold.

Today, most cheese is made in large, automated factories. Opening in 1973, the factory at Notre-Dame-du-Bon-Conseil in Québec had the distinction of being the largest in the world, making about 100 t of cheese daily from one million litres of milk. There are now 5 factories of that size in Canada. In 1997, there were only about 225 cheese plants, about one-half the total of 5 years before. Trade in cheese is less important now than it was at the turn of the century. In 1997, 18 600 t were exported and 19 400 t imported, 88% of which were specialty varieties.

In cheese making, special strains of "starter" bacteria are added to milk to grow and convert the milk sugar (lactose) to lactic acid; rennet is added to coagulate the milk. The bacteria and rennet also aid in ripening and in the development of flavours typical of the variety. The curd is cut and usually cooked to 30-60°C. Whey comes out of the curd and is drained away; the curd is pressed in molds. Salt is added either before pressing or to the surface of the pressed cheese as dry salt or by placing the cheese in a brine solution for a period of time.

Cheese varieties differ because of variations in the making process. Differences in water, fat and salt contents of the cheese result in different firmness and taste. Differences in length and temperature of storage, and type of bacteria, yeast or mold have a major affect on flavour and appearance. For example, the white mold, Penicillium camemberti or P. candidum, is used for Camembert cheese; the blue-green mold, P. roqueforti, is used for blue cheese. The bacterium Propionibacterium shermanii gives the holes in Swiss-type cheeses.

Most cheeses are ripened for periods of 2 weeks to 2 or more years to develop their distinctive flavour; eg, mild cheddar is 1-2 months old, medium cheddar, 5-8 months old, and aged cheddar, 10-24 months old. A few cheeses are not ripened and are consumed fresh, eg, cottage, cream and ricotta cheeses. Processed cheese is made by grinding natural cheese, heating it to 70-80°C and cooling; added emulsifiers (eg, citrates, phosphates) give the typical smooth consistency.

Hundreds of varieties of cheese are made around the world. Canadian production includes brick, Brie, Caciocavallo, Camembert, cheddar, Colby, cottage, cream, Edam, Emmentaler, l'Ermite, farmers, feta, Friulano, Gouda, Gruyère, Havarti, Limburger, marble, Monterey Jack, mozzarella, Muenster, Parmesan, pizza, Provolone, Quark, ricotta, Romano, Scamorza, spiced, Swiss and Tilsit. One of the earliest cheeses in Canada was "Île d'Orléans" cheese, made by French settlers on the island by that name in the St Lawrence river. Canada's best-known distinctive cheese other than cheddar is Oka, originally developed and made by monks at the Trappist monastery in Oka, near Montréal.