The Communist Party of Canada had its beginnings in 1921 at a secret meeting in a barn in Guelph, Ontario, attended by 21 Canadians and three representatives from Communist International — an organization dedicated to the creation of a global state led by the Soviet Union. This group established the Workers’ Party in February 1922. Two years later, the Workers’ Party was abolished and the organization was rebranded the Communist Party of Canada.

The party’s program was based on the socialist doctrine of Russian revolutionary Vladimir Lenin. Lenin elaborated upon the Communist Manifesto, written by philosophers Karl Marx and Frederick Engels in 1848.

In the party's early years, the Royal Canadian Mounted Police harassed it, broke up its meetings, raided its offices, confiscated its literature, and in 1931 arrested its main leaders. The RCMP was acting under Section 98 of the Criminal Code, a vaguely worded section created in 1919 following outbreaks of violent labour unrest in Canada. The section prohibited any association with “unlawful” organizations that advocated using force to change the government of Canada.

Section 98 violated civil liberties, and was declared illegal by Parliament in 1937 during the tenure of Prime Minister William Lyon Mackenzie King. However, the Québec legislature under the Union Nationale government passed the Padlock Act in 1937, which allowed the province’s attorney general to padlock any house or building in which he believed communism was being propagated. The Padlock Act was declared ultra vires (outside provincial jurisdiction) by the Supreme Court of Canada in 1957.

Many members of the Communist Party became leaders of Canadian trade unions and organizers of new unions, especially among industrial and unskilled workers. During the 1930s, Communists in Canada and the United States were successful in organizing a number of industries under the new Congress of Industrial Organizations (CIO). They were also instrumental in organizing the On To Ottawa Trek and the Canadian Youth Congress. 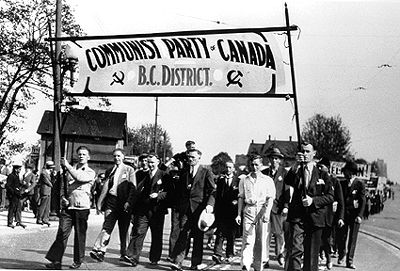 Canadian communists march in Vancouver in the 1930s.

During the Spanish Civil War (1936–39), Communists recruited more than 1,500 Canadians to the International Brigade (Mackenzie-Papineau Battalion), to fight against the fascist forces of Francisco Franco.

After 1930, the Communist Party succeeded in electing Fred Rose to the House of Commons in Ottawa, as well as a number of members to municipal and provincial political offices. Among those were Jacob Penner and Joseph Zuken, who between them held municipal office in Winnipeg from 1934 to 1983; A.A. MacLeod and J.B. Salsberg, who were elected to the Ontario legislature in 1943; and W.A. Kardash, who was elected to the Manitoba legislature in 1941.

During that period, Tim Buck was leader of the party and was well known throughout the country. Dr. Norman Bethune was another famous Canadian Communist, who became a hero to the anti-fascist cause in the Spanish Civil War, and to the Chinese in the Chinese Revolutionary War.

The Canadian Communist Party supported the aims of the Second World War initially, but within 10 days, on orders from Moscow, reversed its position. As a result of its anti-war policy, the party was officially banned in Canada, and more than 100 leading members were imprisoned. On 22 June 1941, Germany attacked the Soviet Union, and war erupted across the European eastern front. This prompted the party to change its position again to support the war against Germany.

During this period, the party was renamed the Labour-Progressive Party of Canada.

In the fall of 1945, Igor Gouzenko, a clerk in the Soviet embassy in Ottawa, revealed that a number of prominent Canadians had been involved in providing information to the Soviets during the war. As a result, Communist leader Fred Rose was arrested and convicted of espionage and sentenced to six years in prison. Others, including Sam Carr, a leader of the party for many years, were also convicted. Most of those charged were released for lack of evidence.

After Lenin’s death in January 1924, a bitter struggle ensued inside the Soviet Communist Party in Russia, which ended in a victory for Josef Stalin in 1928 and a crushing defeat for the other leading members of the Soviet government. Stalin then ruled the Soviet Union and was the recognized leader of the Communist parties of the world until his death in March 1953. During these years, criticism of Stalin’s anti-democratic methods was expressed by governments, writers and political activists throughout the world. The Moscow Trials of 1936 (which led to the execution of prominent Soviet leaders), the invasion of Finland, the Soviet labour camps, and Stalin’s pact with Hitler, all brought condemnation — which was dismissed by Communist parties in Canada and elsewhere as anti-Soviet propaganda. Hostility to the Soviet Union, however, decreased substantially when the Soviet Union joined the war against Hitler and the Soviet Army was a crucial factor in defeating Germany.

In 1956, Nikita Khrushchev, First Secretary of the Communist Party of the Soviet Union, exposed the brutality of the Stalin regime. As a result, many Communists in other countries, including prominent leaders, resigned or formed new parties. The Soviet Union’s invasion of Hungary (1956) and Czechoslovakia (1968), and tensions between the Soviets and China during the post-war period, further accelerated the disintegration of Communist parties throughout the world. This process continued through the collapse of the Soviet Communist Party and the government of Mikhail Gorbachev, from the mid-1980s to 1991.

In Canada, these events were reflected in the split of the party in the early 1990s, after the collapse of the Soviet bloc of nations. A struggle for control of the party in Canada was fought between those who supported Marxism-Leninism and those who opposed it, favouring instead social-democratic ideas and values. Control was ultimately maintained by the Marxist-Leninists, with the reformers leaving the party.

Those who remained in the party began publishing a monthly periodical called The Peoples Voice. They also fielded candidates in elections, but their numbers were small.

When the party failed to run more than the required minimum of 50 candidates in the 1993 election, Elections Canada de-registered the party. Its angry members retaliated with a lawsuit (Figueroa v. Canada), demanding that the 50-candidate rule instituted by Prime Minister Brian Mulroney’s government in the 1980s be changed. Ultimately, the Supreme Court of Canada deemed the 50-candidate rule unconstitutional, a ruling welcomed by many small parties across Canada.

In recent decades, there has been a slight resurgence of interest in the party, including a revival of interest in the Young Communist League. The party continues to run a number of candidates in federal general elections, and holds annual conventions that attract approximately 60–70 delegates from all regions of Canada. In 2016, the party elected Elizabeth Rowley as its first woman leader.