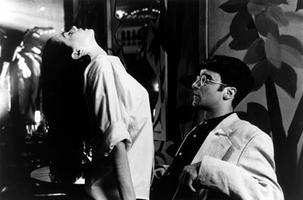 Exotica's complex storyline focuses on the owner, workers and patrons of a lushly decorated strip club in Toronto. There, a neurotic tax auditor, Francis, is obsessed with Christina, a dancer who dresses like a schoolgirl. Their interactions are monitored by Eric, the club's emcee and Christina's jealous ex- boyfriend. Francis pays his young niece, Tracey, to "babysit" his empty house when he is at the strip club, and is auditing Thomas, a petshop owner who smuggles exotic birds' eggs into the country. He uses this information to blackmail Thomas into helping him deal with Eric. As the story unfolds, flashbacks reveal the mysterious circumstances that account for Francis's and Christina's psychological dependencies.

Exotica anatomizes the obsessive rituals of a "look-but-don't-touch" sexualized environment. Atom EGOYAN sets the alienation of the characters against the lush eroticism of the sex club setting. An undertone of pedophilia, abduction, incest and murder informs the film without being dramatized beyond the search for a dead schoolgirl's body, so that the spectator is left to imagine the unimaginable. The sex club setting allows Egoyan to investigate structures of voyeurism in ways that sidestep exploitation and sensationalism. A complex, push-pull effect on the viewer is created by maintaining a distanced point of view even while depicting scenes of seduction. The film balances a careful observation of character with a sympathetic understanding of their plight. The visual preoccupation with surfaces does not preclude depth of emotional content. Egoyan's characters are neither villains nor angels; they embody and express deeply felt social tensions and conflicts.