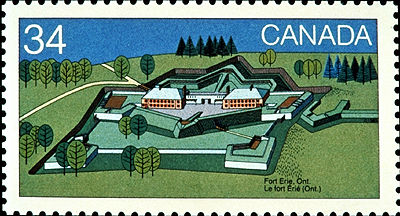 LOYALISTS settled in the area in 1784, followed by German immigrants, but Fort Erie, first as a French trading post and then as a British fort, has guarded this strategic point since 1764. The village near the British fort of the same name amalgamated with the town of Bridgeburg, a railway centre, and became the town of Fort Erie in 1931. Two early forts were destroyed by ice from Lake Erie and the powerful Niagara River, and a third was partly destroyed by American soldiers in 1814 - the last foreign troops to occupy Canadian soil. Restored between 1937 and 1939, the forest and grounds are now managed by the Niagara Parks Commission.

The town hosts with Buffalo, NY, the Friendship Festival, which together with the Peace Bridge and Mather Arch and Park celebrates the decades of peace and friendship that have existed between Canada and the US. The International Bridge (1873), built by the GRAND TRUNK RAILWAY and the first to cross the river at this point, was followed by the Peace Bridge (1927), which soars across the river to make the town one of the busiest border crossings between Canada and the US. Since the inception of NAFTA (1994), a severely congested Peace Bridge has resulted in acrimonious discussions on whether to duplicate the present bridge or replace it with a "signature" bridge of outstanding and innovative design. The frictions are not only between Canada and the US but also over whether the bridge continues to remain in the public sector.

Fort Erie has one of North America's oldest and most attractive horse racetracks. The town also includes summer cottages and residential-recreational communities along LAKE ERIE, notably Crystal Beach and the inland communities of Ridgeway and Stevensville. The BATTLE OF RIDGEWAY is depicted at the Ridgeway Battlefield Museum. The town is the south entrance for the Niagara River Recreational Trail and the Niagara River Parkway, and is the terminus of the QUEEN ELIZABETH WAY from Toronto.