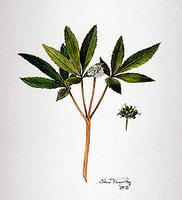 Although there is no scientific evidence of medicinal value, ginseng has a long history of medical use, continuing today (artwork by Claire Tremblay).

Although there seems to be no scientific evidence of medicinal value, ginseng has a long history of medical use, continuing today. The Chinese, in particular, consider its dried root immensely valuable in prolonging life, vitality and sexual potency. American ginseng (P. quinquefolius) occurs in woods of central and eastern North America; however, local demand has resulted in its becoming very rare in the wild. It was once exported to China, but the Chinese found it inferior to their own product. Dwarf ginseng (P. trifolius) grows in moist woods from Ontario to the Maritimes. Ginseng (P. pseudo ginseng), native to Korea and Manchuria, is now cultivated quite extensively in eastern Canada.