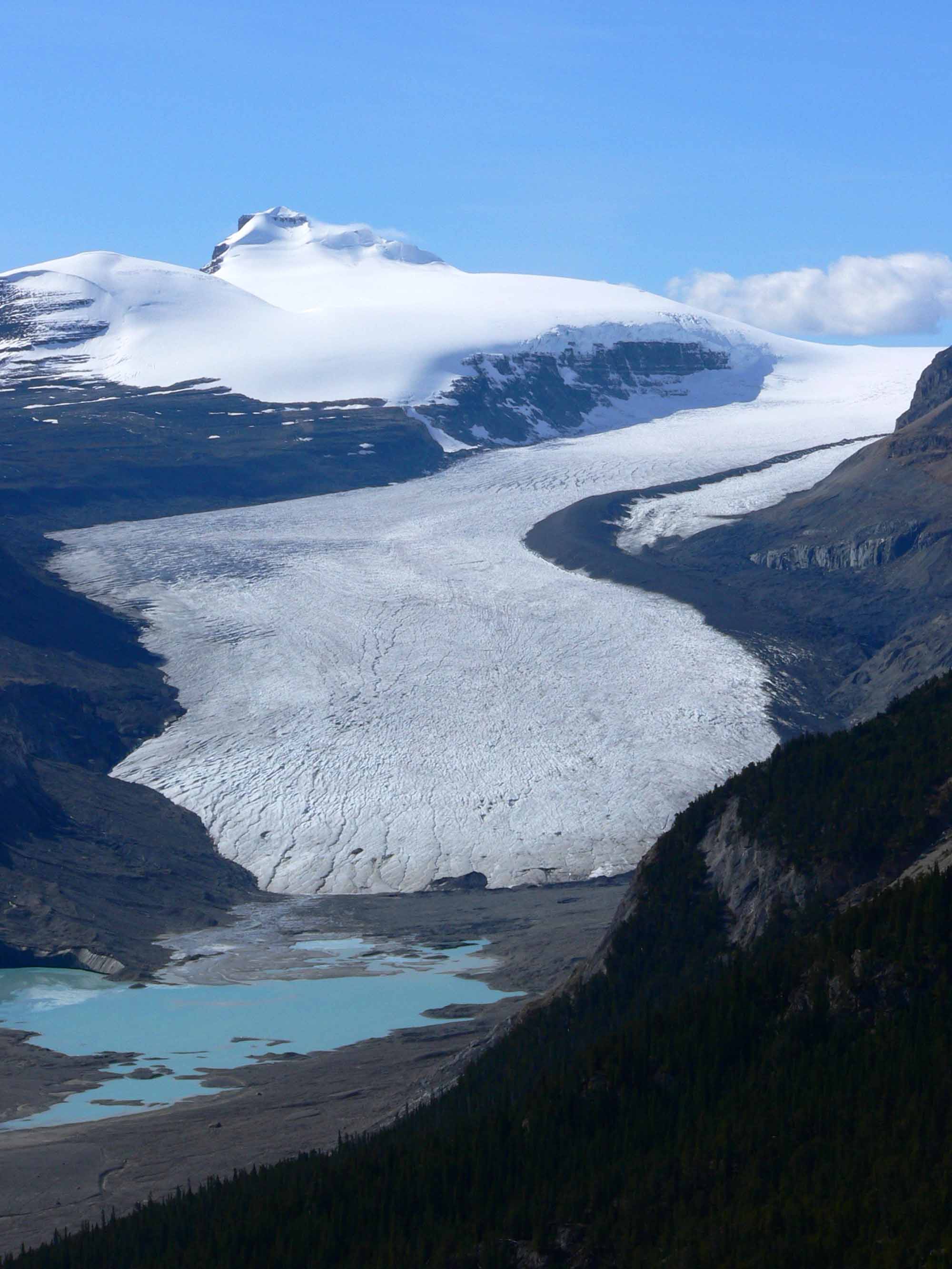 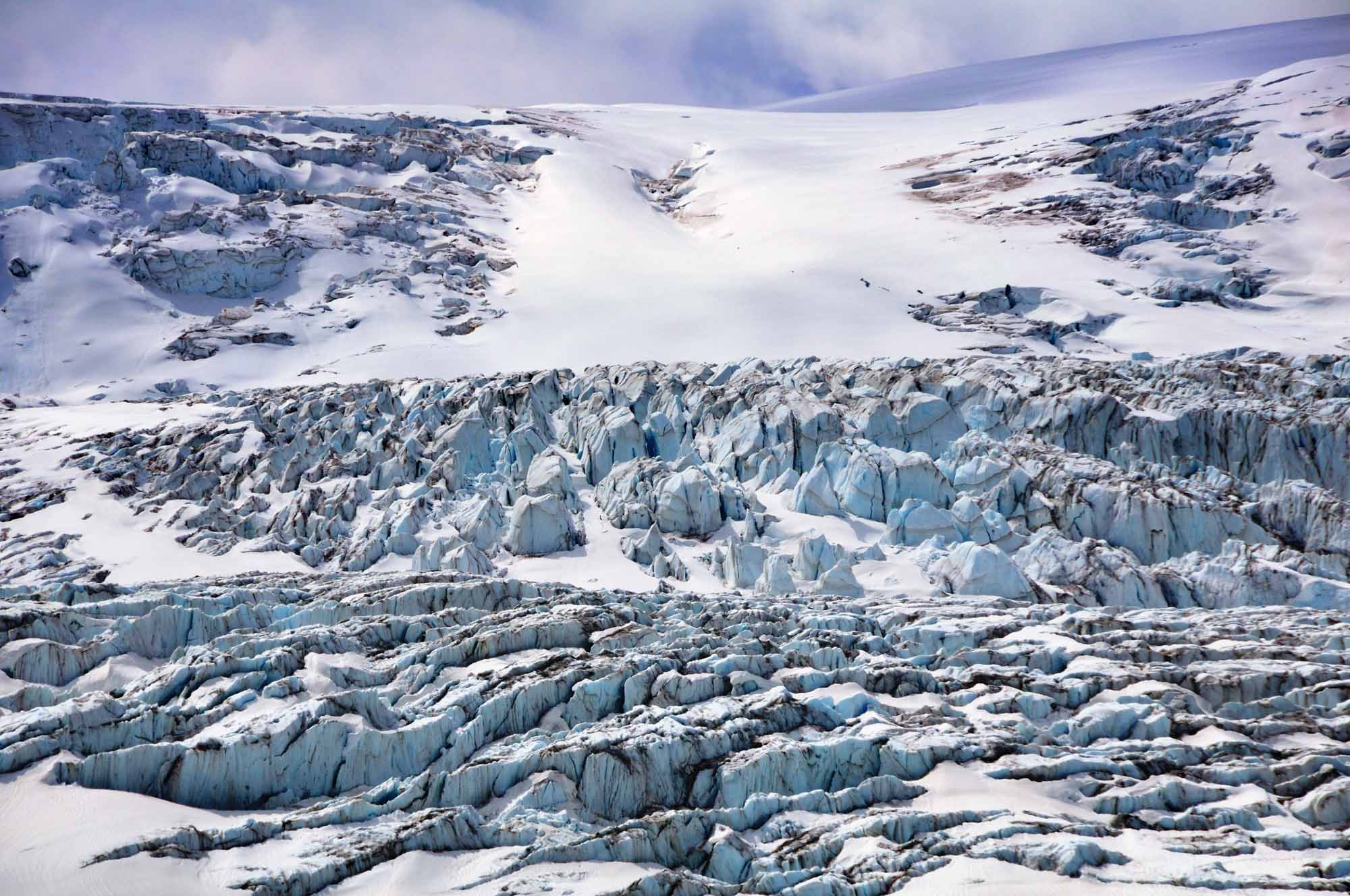 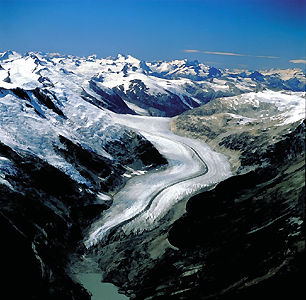 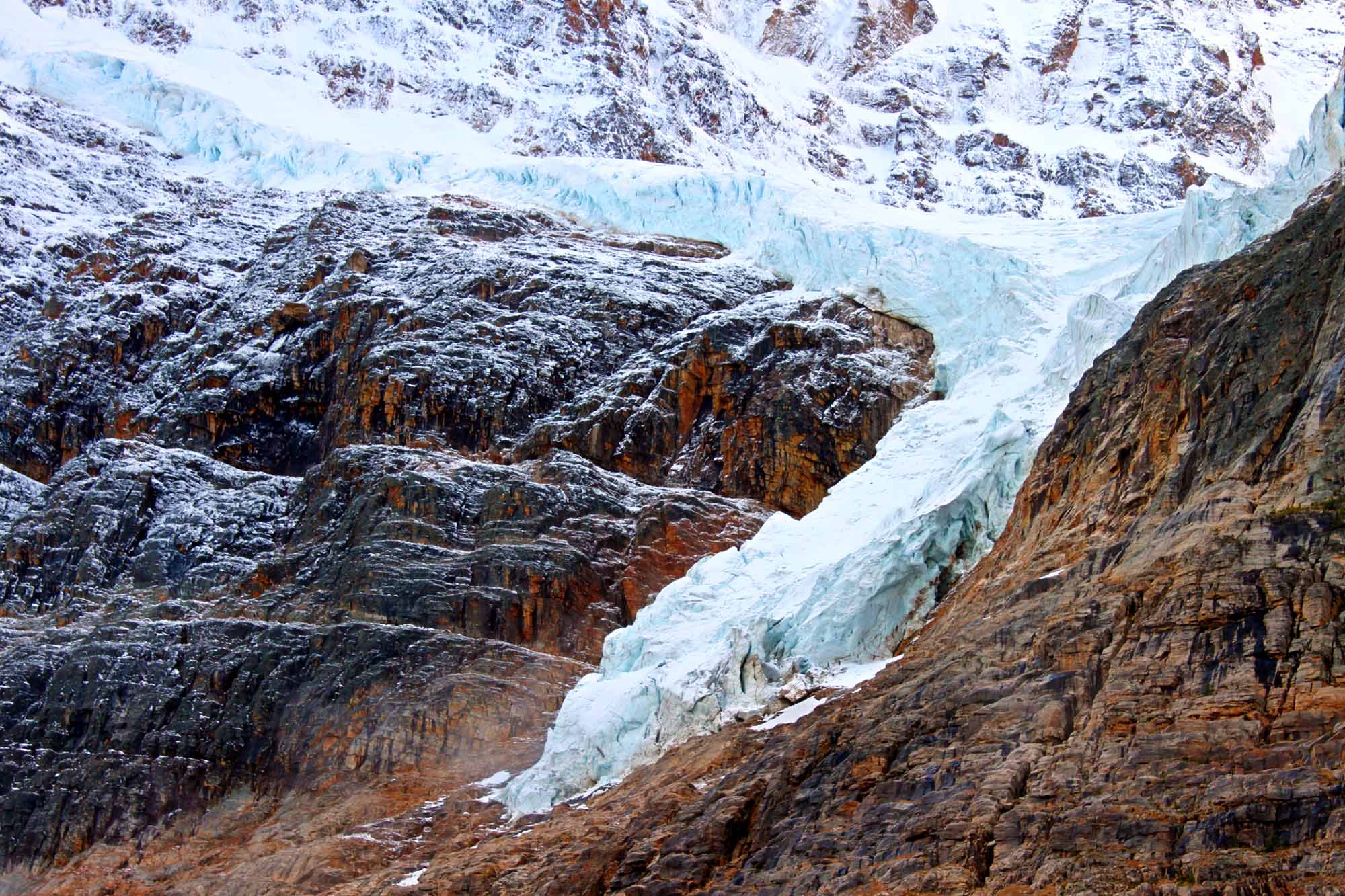 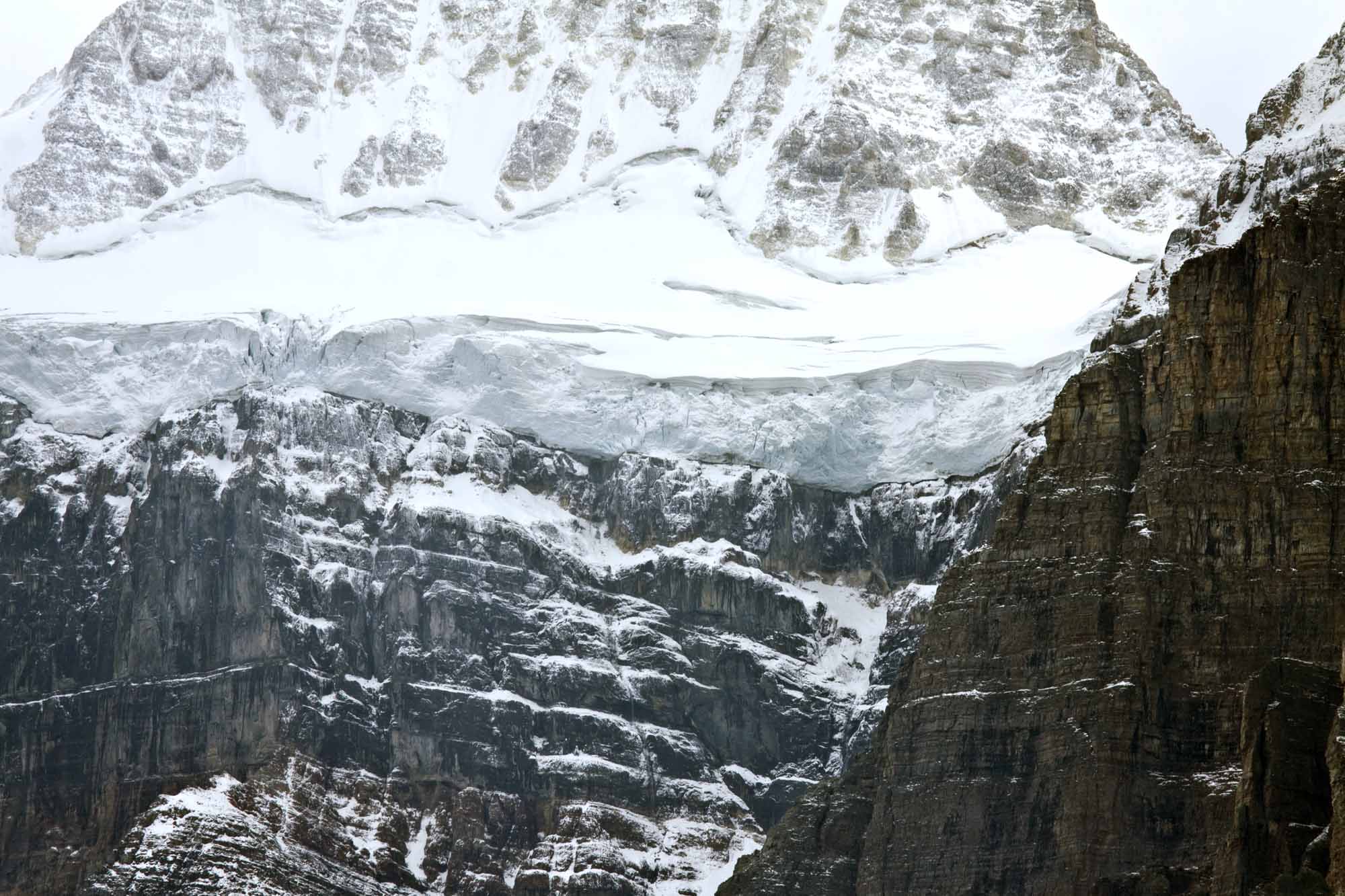 Glacier ice moves downslope or outward in all directions under the weight of gravity. This commonly occurs through internal deformation (structural changes within the glacier) and basal sliding (when the glacier moves on a base layer of meltwater). Glaciers may end on land, in the ocean (as an ice shelf) or in a lake. Their movement, though much slower, is comparable to the flow of a river.

There are two principal categories of glaciers: alpine glaciers and continental glaciers.

Alpine glaciers form on mountains whose high elevation and cold temperatures allow layers of snow to accumulate and compact into ice. Valley glaciers, whose movement follows underlying slopes, are common examples. Their speed varies, but most of these glaciers move less than a metre per day on average. Some valley glaciers, called surging glaciers, can achieve speeds greater than 60 m per day.

When a political or societal process takes a very long time, the adjective glacial — a reference to the slow movement of glaciers — is often used to describe its pace.

Tens of thousands of valley glaciers exist worldwide. In Canada, they are found mainly at higher elevations of the western mountain systems and in the mountains and highlands of the Arctic Archipelago, e.g., Axel Heiberg, Ellesmere, Devon and Baffin islands. Many are less than one kilometre long. Others are much longer, such as the Hubbard Glacier in Yukon and Alaska, which stretches more than 100 km. 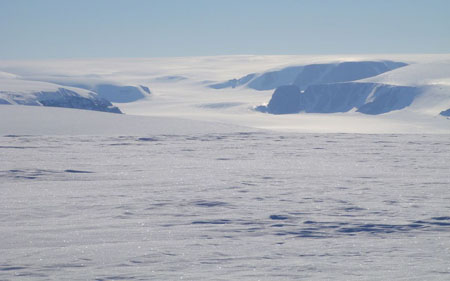 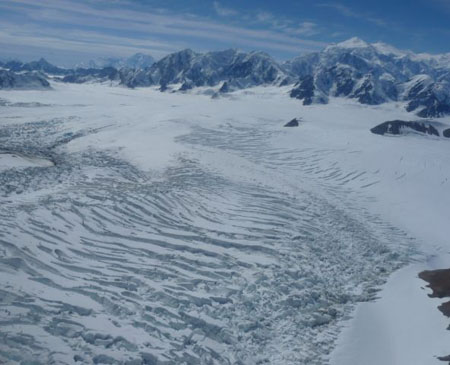 Cirque glaciers form in high-elevation depressions at the heads of valleys. These small glaciers may expand to become valley glaciers.

Piedmont glaciers form when ice flows out of valleys and onto flatter land.

Continental glaciers are dome shaped and not greatly impeded by topography; thus, they are able to move outward in all directions. Ice caps and ice sheets generally move at slower speeds than valley glaciers. Canada has several ice caps, located in the Cordillera and Arctic Archipelago. 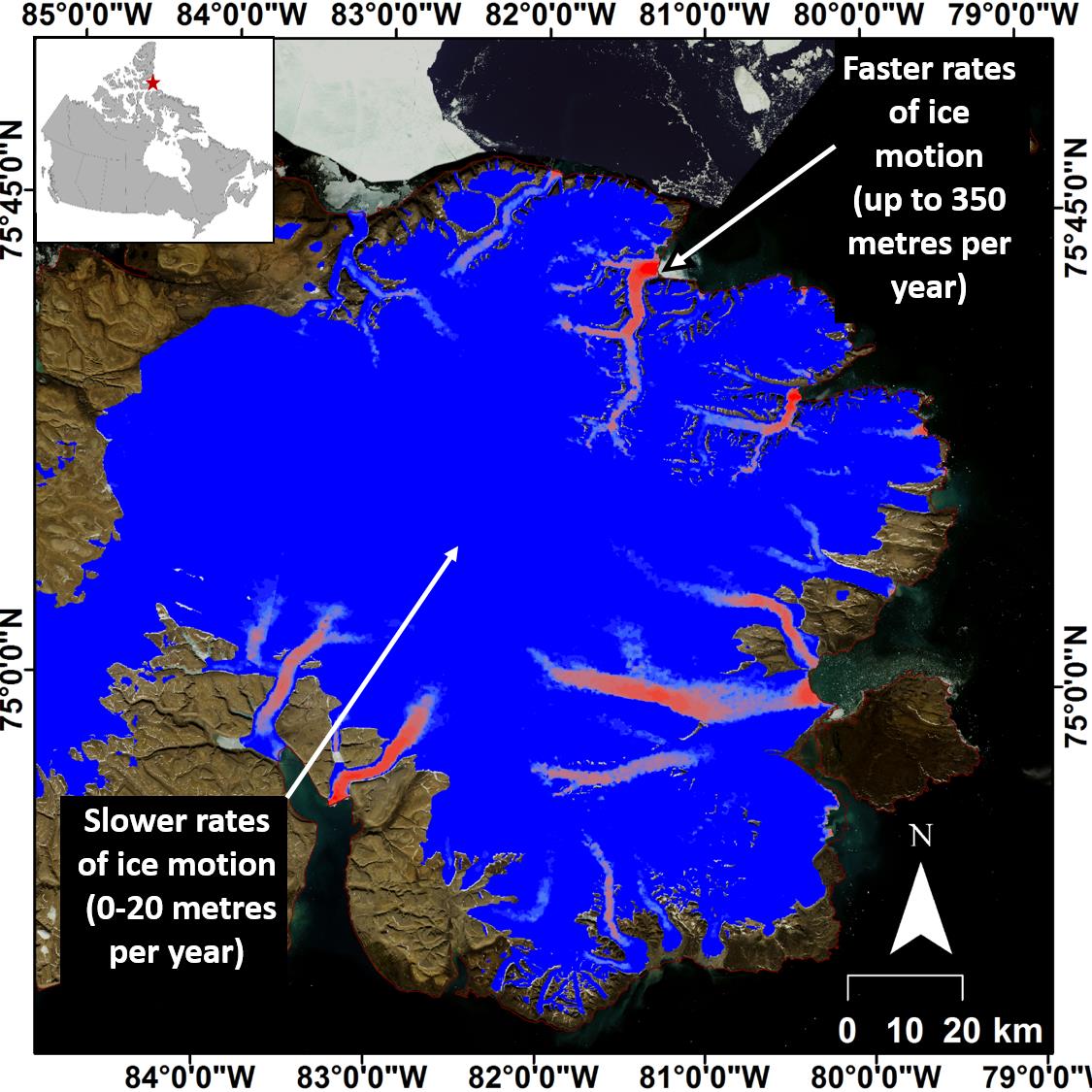 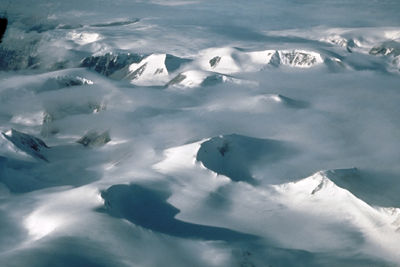 Features commonly produced by glaciers can be observed on or near the Athabasca Glacier in the Rocky Mountains of Jasper National Park. This glacier, fed by the Columbia Icefield, has been shrinking (or “retreating”) since the mid-1800s. Its surface exhibits crevasses, i.e., cracks that form when the glacier is stretched by accelerated movement or when it travels over uneven rock. Icefalls — steep, unstable masses of ice blocks — have resulted from crevasses formed where the glacier hangs over a sharp formation of bedrock such as a cliff. 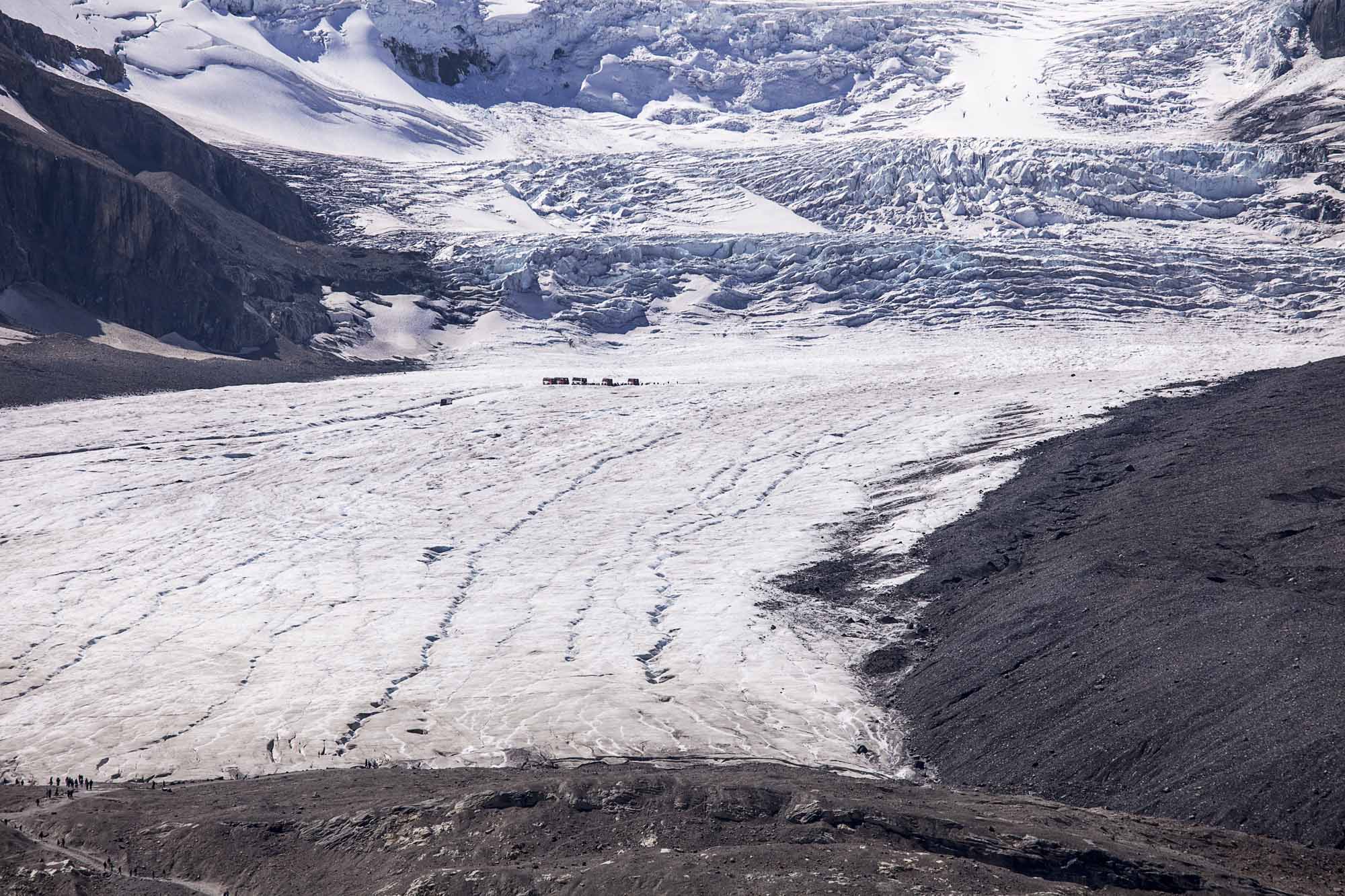 The Athabasca Glacier is formed from the ice fall coming from the Columbia Ice Field. The glacier is said to be 800 feet deep. 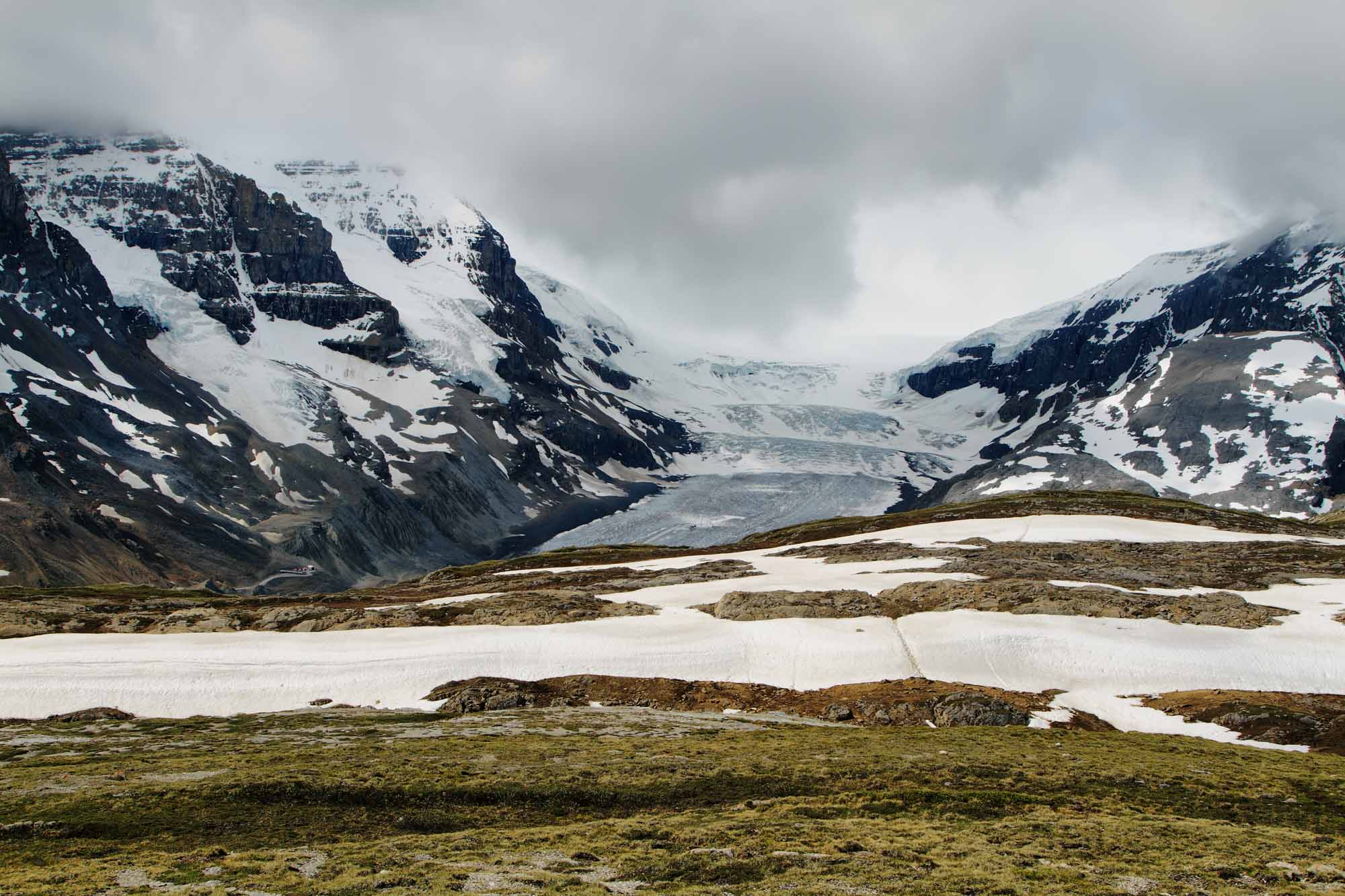 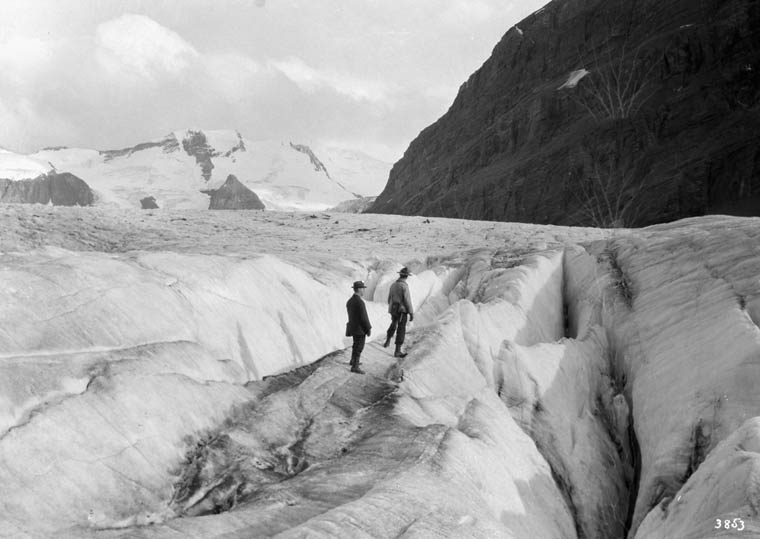 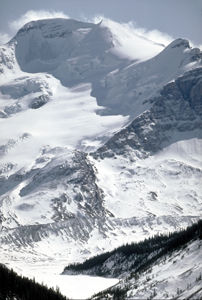 Other features that were formed during the retreat of the Athabasca Glacier (and can be seen nearby) include lateral and recessional moraines — masses of debris deposited along the end or “toe” of the glacier. In addition, glacier meltwater carries and deposits debris, forming such features as deltas and glacial outwash plains composed of sand and gravel (see also Esker).

It takes 150–200 years for snow on the Athabasca Glacier to turn to ice, travel the glacier’s 6 km length and melt at its toe. This is considered a short journey relative to larger, slower glaciers.

Impacts of Climate Change on Glaciers 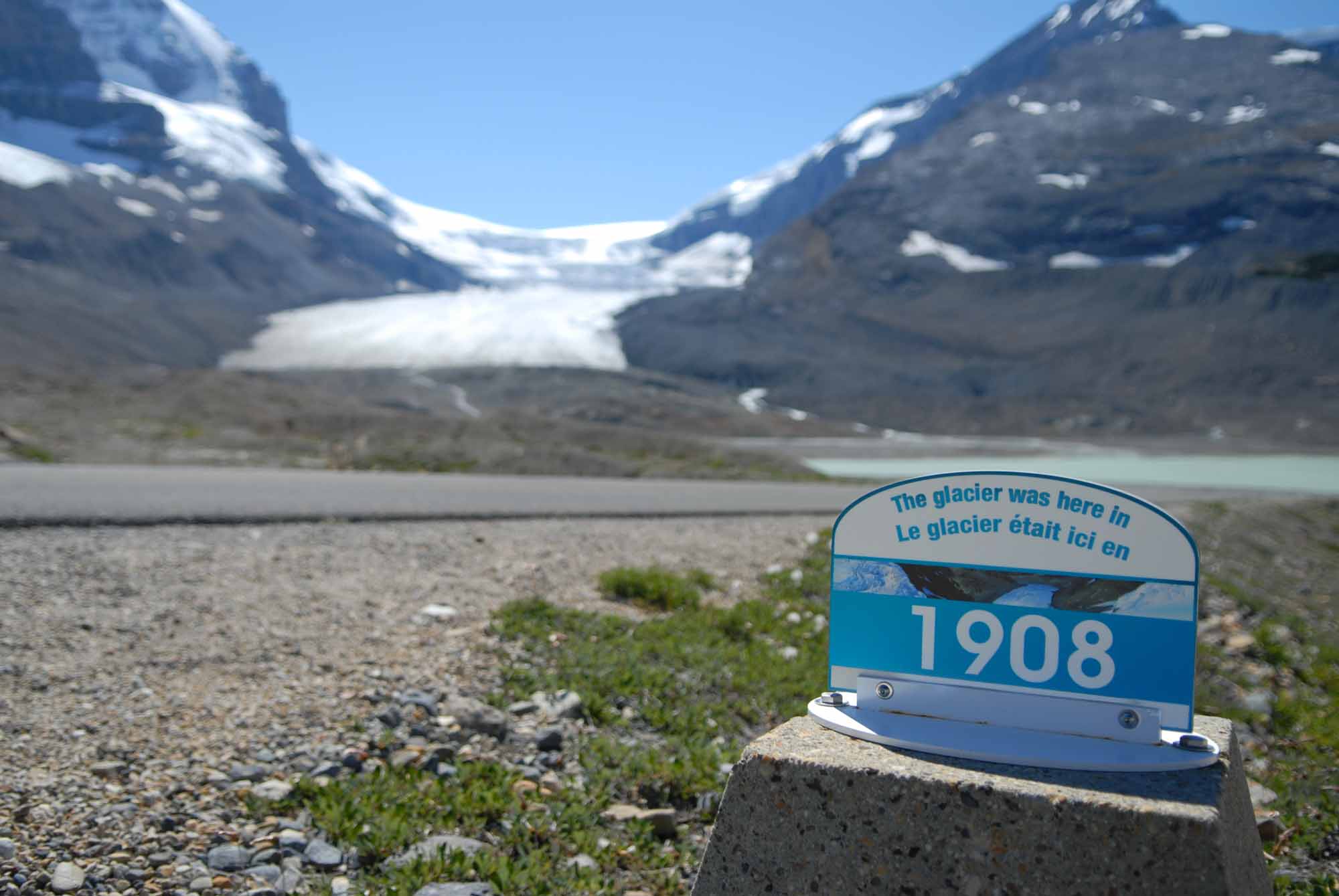 Global average temperatures have increased at an unprecedented rate over the past two centuries due to the effects of human activity on climate change. With warmer temperatures and decreased snowfall, many glaciers have been melting faster than ice can accumulate. Sea levels are projected to rise as this process continues, affecting millions of people living along coastlines and in island nations worldwide.

A 2015 study affiliated with the University of British Columbia projected that by the year 2100, glaciers in Alberta and BC could lose 70 per cent of their 2005 volume. These glaciers have been thinning at a rate of about one metre per year, and their peak volume loss is expected to occur between 2020 and 2040. With more than 17,000 glaciers, Alberta and BC would experience dramatic changes to their ecosystems, water supply, agriculture and tourism. 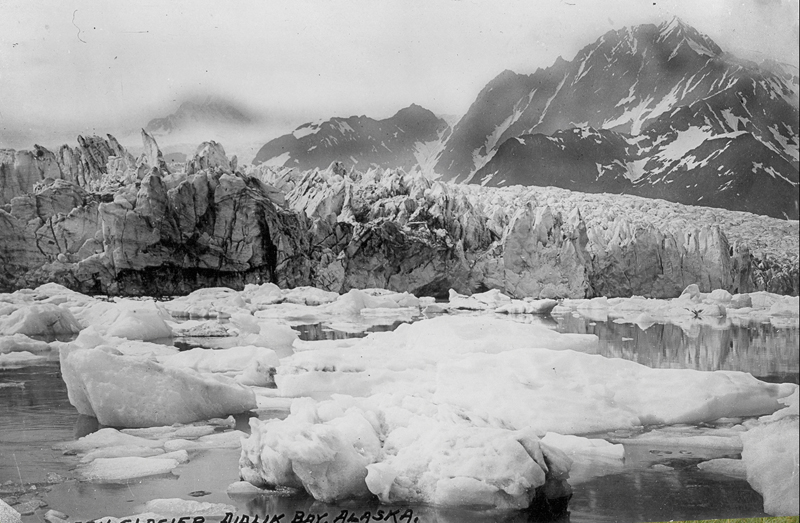 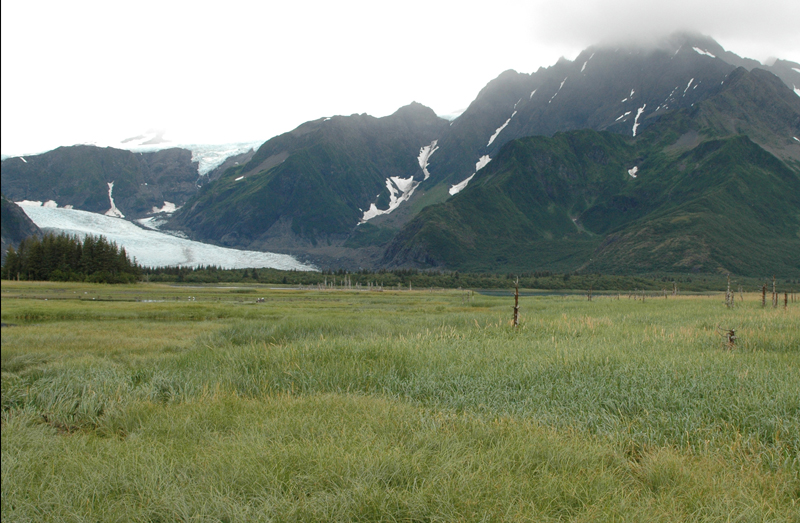 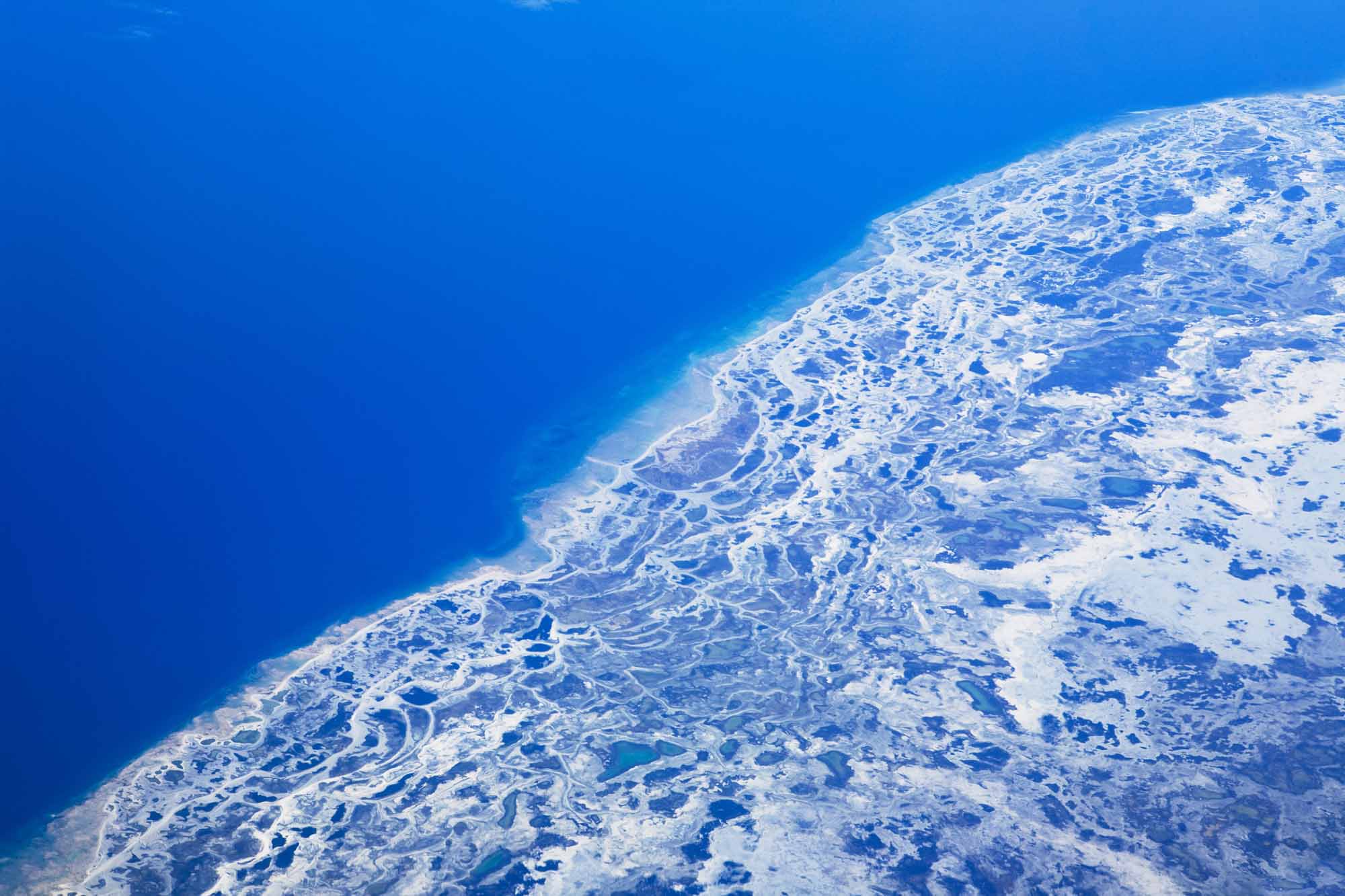 An aerial view of a melting glacier in the ocean.
PreviousNext 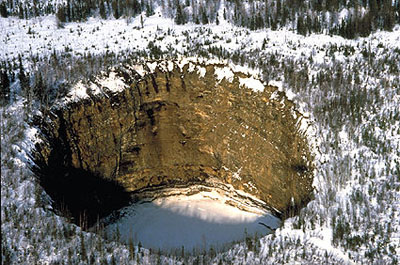