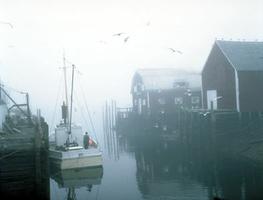 One of three villages on the Island of Grand Manan in New Brunswick, at the entrance to the Bay of Fundy (photo by Bill Brooks/Masterfile). 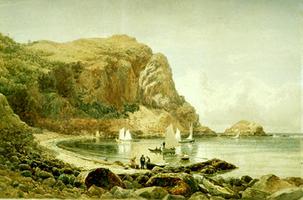 Lucius O'Brien, 1880, watercolour (courtesy NGC).
PreviousNext
Grand Manan Island, NB, 137 km2, is the largest and most remote of the 3 major islands at the entrance to the Bay of Fundy (the other 2 being DEER and CAMPOBELLO Islands). It is 24 km long and 10 km at its widest point. Accessible year-round by ferry from Blacks Harbour, it is 27 km from the New Brunswick mainland, 13 km from the Maine coast. Its name is part-French, part-Passamoquoddy (munanook, meaning "island") in origin.

With a population of about 2500 - chiefly in the villages of North Head, Grand Harbour and Seal Cove - its chief industries are scallops, herring, lobster and salmon aquaculture, dulse (seaweed) gathering and tourism.

The first recorded visit by Europeans was made in 1604 by Samuel de CHAMPLAIN and the Sieur de MONTS, though the Norse may have visited earlier. The island was a French seigneury for many years, but most inhabitants are descended from Loyalists who settled here following the American Revolution. Among the first to arrive (1784) was Moses Gerrish, whose Grand Harbour home is now the Grand Manan Museum.

Grand Manan is on the eastern flyway for migratory birds, and more than 400 species have been counted at the east coast sanctuary between Grand Harbour and Seal Cove. The island is a convenient spot for whale watching, as several species, including humpback, minke, fin, pilot and right, inhabit the surrounding waters. Seals and Atlantic white-sided dolphins are seen as well.

Geologically, Grand Manan is divided into 2. The larger western part is of higher terrain with steep cliffs (up to 125 m) along the coast. Primarily volcanic in nature, it is composed of Jurassic (205.7-144.2 million years ago) basalt with some red sandstone. The lower eastern part is older and composed mainly of Late Precambrian to Silurian sedimentary and volcanic rocks (550 to 410 million years ago) as well as granite. At Red Point, east of Seal Cove, the fault dividing the island into 2 is visible from the shore. Also near Seal Cove is the "flock of sheep" - glacial deposits, including many boulders - deposited from the last ICE AGE.