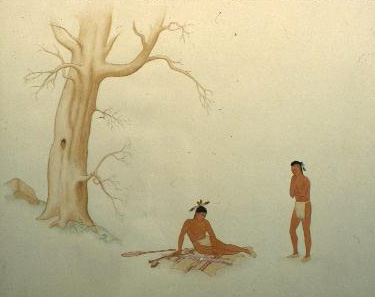 Hiawatha and Deganawida (the Great Peacemaker)

As with most prophets and legendary figures in history, the story of Hiawatha is part gospel, part historical legend, and part backwards projection of modern ideas and stories into the ancient past. Told through storytellers within many generations, no two versions of the story remain the same. Common discrepancies between tales of Hiawatha include his true nation of origin (Mohawk or Onondaga), the year in which he formed the Confederacy and even whether Hiawatha was a real person or a legend.

However, one consistent aspect of these tales is that the story of Hiawatha takes place in the precolonial context of blood feuds, also known as mourning wars. From roughly the 15th to the early 17th century, various groups waged war on one another, often as a means of vengeance, in a seemingly never-ending cycle of violence. A tradition of replacing fallen warriors with captives taken in battle was meant to help mourners deal with the deaths of their loved ones. Instead, it often prolonged the cycle, causing neighbouring nations to take their own captives to replace lost tribesmen. War perpetuated famine because it drew on the food stores of the villages and prevented hunters from hunting for the meat necessary to survive the winter months. Many perished during this time because warriors held the honours of warfare above all else. It is from within this deadly and violent context that the story of Hiawatha emerges.

Many translations exist of Hiawatha’s name. Two of the most prevalent are: “He who combs,” in reference to Hiawatha’s ability to convince his rival, Atotarho (or Athatotarho), to join the Iroquois League; and “He who has lost his mind, but seeks to find it,” in reference to the months he spent roaming the woods in depression and despair following the death of his family.

The Story of Hiawatha

Three figures appear prominently in the story of Hiawatha, each representing a different aspect of the precolonial violence that plagued the Five Nations. First is Hiawatha, an Onondaga warrior, whom, having lost not only his wife, but also his daughters, represented the inconsolable victim of the blood feuds. Many versions of the narrative describe Hiawatha as deeply depressed following the death of his family. He was said to have wandered the lands of the Haudenosaunee in a perpetual state of mourning.

The second figure, Atotarho, was a war chieftain of the Onondaga, who was said to have snakes in his hair and to have control of powerful dark magic. He is represented as the aggressor in the blood feuds. The magic of Atotarho paralyzed the councils of the Onondaga, robbing them of the ancient rites of council and open discussion. All of those who wanted to speak out against him did not, for fear of fatal retribution.

Finally, there is Deganawida, or the Great Peacemaker, who was an outsider, traditionally seen as coming from the north, from the nation of the Wyandot or Huron people, to bring a message of peace to unite the Five Nations. Some versions of the narrative also include Jigonsahseh (Jigonsaseh), or the Peace Queen, a woman descended from the Sky Mother herself. Her encouragement and approval of the Great Peacemaker's message of peace symbolizes the ritual of gaining consent of a council of women, or clan mothers, before major political actions were taken.

Hiawatha and the Great Peacemaker are often attributed as the founders of the Ne Gaynesha'gowa / Kaianere’ko:wa (“Great Law of Peace”) or Iroquois League, as represented by the longhouse. Known as the “People of the Longhouse,” the Haudenosaunee hold this symbol sacred. The longhouse describes not only the building within which they lived, but their way of life and internal political structure. Archaeological records place the founding of the League sometime in the late 1400s.

During the 15th century, the Great Peacemaker, a prophet and chief, travelled south from his homeland to reside in the land of the Mohawk. It was here, following Hiawatha's self-exile after the death of his wife and daughters, that these two men met and shared their passions for ending the war and violence amongst the Haudenosaunee.

Hiawatha, in his deep depression, had a clouded mind. He could not think clearly and his rage had stolen away his sense of reason and rationality. The ceremony of condolence that the Great Peacemaker taught to Hiawatha was first performed in response to this grief. Anguish had the ability to push survivors of the blood feuds deep into despair, causing them to disregard reason and to lead them towards fits of rage, which could be harmful to themselves, as well as to the community at large.

The Great Peacemaker’s message was to replace the blood feuds and mourning wars with peace. The condolence ceremony would help them to achieve that. Being unaffected by grief, the Great Peacemaker was of sound mind, and could perform the ceremony. Only those with clear minds could do so. First, he dried the eyes of the weeping mourner, so that he could see. Second, he opened the ears of Hiawatha, so that he could hear; and finally, he cleared the throat, so that he could speak. After this ceremony, the pain and sorrow was vanquished from the mourner, and his reason returned. This ceremony was key to uniting the warring Five Nations. As an outsider, the Great Peacemaker's message was not influenced by allegiance to any particular band. He spoke of the peace from his heart, rather than from any personal interest.

Once reformed by the Great Peacemaker, Hiawatha became his disciple, travelling the lands of the Five Nations to preach the good news of the condolence ceremony. So that he would not forget the ritual, he immortalized it within the beads made from shells, known as wampum, which he wore around his neck. According to some legends, he first began with the Mohawk, the easternmost nation of the Haudenosaunee, and eventually made his was westward toward the Oneida. Both nations, after the traditional waiting period of a year, approved of the message of the Great Peacemaker.

Hiawatha returned to his home village of the Onondaga, and approached the great war chieftain Atotarho to deliver his message of peace. All the warriors of the region feared the dark magic of Atotarho, whose hair was said to be entangled with snakes. Atotarho had risen to power during the blood feuds and mourning wars; consequently, he did not approve of a peace between the warring nations. 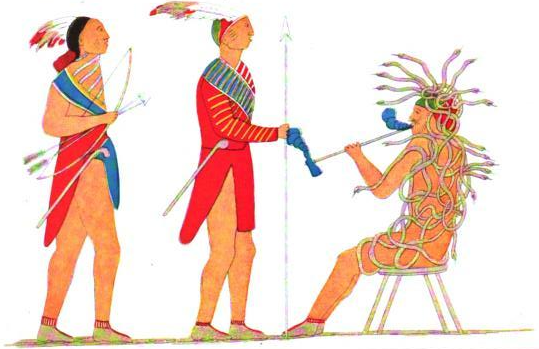 Hiawatha, the Great Peacemaker and Atotarho.

Undaunted, Hiawatha continued onto the Cayuga and the Seneca, both of whom signed onto the gospel of the Great Peacemaker. When all four nations were aligned, they again approached Atotarho, who, blinded by the rage of blood feuds and his own personal power, still refused to join the Confederacy. Members of the four aligned nations spoke with Hiawatha; they believed that they were stronger than they had ever been before. They asked why they could not simply take Atotarho and the Onondaga by force, coercing him and his nation into the Confederacy. Hiawatha believed this would be a stain on the founding of the Confederacy, which was an attempt to replace the wars between kin with an era of peace. He said, “There is a better way to vanquish Atotarho.”

The four nations convened around a council fireto convince the Onondaga to once again join their Confederacy. Hiawatha offered Atotarho the leading role as the “chief sachem” or great chief, with his home in Onondaga as the central meeting place for the Grand Council. The Grand Council is the traditional ruling body of the chiefs of the Haudenosaunee. This compromise epitomized the integral aspects of peace of this newfound union. Atotarho agreed, and the Iroquois League was born. Though the mourning wars and blood feuds had altered the minds and hearts of Hiawatha and Atotarho, as victim and aggressor, respectfully, the message of peace of the Great Peacemaker, and his condolence ceremony, signified by the beads of wampum, allowed both men to emerge as brothers.

The strength of the Iroquois League enabled the Haudenosaunee to stay strong and united throughout the 17th and 18th centuries, and into the modern era, with an influence that extended from the Ottawa River to the Chesapeake Bay, from New England to Ontario. After the arrival of Europeans to North America in the 1600s, the Haudenosaunee actively played the English, Dutch and French empires off of one another in order to receive what they determined were the best bargains for their goods. The Five Nations, and later, Six Nations, were an important political and military ally to the French during the French and Indian Wars. Some Haudenosaunee nations were also allies to the both sides of combatants during the American Revolutionary War and the War of 1812.

In 1988, the United States Congress passed a bill stating that the confederation of the original Thirteen Colonies was influenced by the political system developed by the Iroquois League, as were many of the democratic principles that were incorporated into the US Constitution.