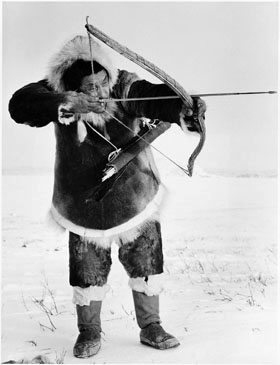 Hunting is the purposeful pursuit to the death of wild animals. People hunt for different purposes: subsistence, trade, wildlife, conservation and management, protection of property, training, recreation and prestige. Subsistence hunters are dependent on hunting for food and shelter, fuel (marine mammal oil), clothing or for cultural survival. Evidence suggests that the earliest humans and their ancestors hunted animals and that some of their earliest tools were weapons. Subsistence hunters or their traces have been found on all continents except Antarctica, and from tropical to polar climatic zones. The varieties of technique and organization seem almost endless. Weapons have included the trap, gorge, noose, net, pitfall, deadfall, bolo, throwing-stick or boomerang, club, knife, spear, javelin, blowpipe, bow and arrow, and harpoon as well as the firearm. Dogs or horses, or both, have often been employed in tracking and pursuit. There can be little doubt that Pleistocene (Ice Age) hunters exterminated some, perhaps many, species.

Presumably, commercial hunting began as trade developed, first, for surplus commodities between communities of subsistence hunters; later for commodities to be traded on a wider scale. Besides ivory from walrus and elephant commercial products of the hunt include feathers, skins, furs and meat. Additionally, parts such as bones, antlers and gall bladders are used in medicinal pharmacology throughout Asia. Such products have been traded for millennia. Excessive harvesting has been a recurrent problem and has become chronic in the last 200 years, with widespread affluence creating demands which are filled by efficient means of hunting, transport and trade. Species bearing the most valuable products (eg, sea otter) have suffered severe depletion. Several species are now threatened by poaching and commercial hunting, particularly certain whales, sea turtles, rhinoceroses and elephants, and the black bear in Canada. Commercial hunting for feathers and plumes declined early in the 20th century with the imposition of strict import controls in Europe and North America. Fur animals have generally proved well able to sustain harvesting with some notable exceptions, particularly the sea otter.

The fur trade, although subject to the swings of fashion, remains viable; its future depends perhaps on philosophical rather than resource issues. For example, Canadian hunters face the prospect of a European ban of Canadian furs over the use of the leg-hold trap. In many countries, the meat of hunted animals enters the market, where it competes with domestic meats and returns money to landowners, collectives or hunting associations to set against management costs. The culling of herds and the reduction of vertebrate pest populations are examples of hunting directed to husbandry or the protection of economically important resources.

Trophy hunting is a kind of recreational hunting and demands time, money and effort. It is essentially competitive in nature, the object of the trophy hunter being to get a large specimen. The measurements used for North American trophies taken by firearms are formally detailed by the Boone & Crockett Club, which appoints qualified judges, adjudicates conflicts, provides standards and, in particular, rules on questions of whether or not specimens were taken in "fair chase." A similar system administered by the Pore & Young Club exists for ranking trophies taken by archery.

Today, most hunting in Canada is recreational and motivated by the tangible as well as intangible rewards of success. Under the common law, game is public property until killed or crippled or "brought to bag," although in the case of game on private land the owners control access. Under administrative laws and regulations, competent jurisdictions set out rules governing hunters. These rules may include strictures on age and qualifications of applicants for hunting licences, as well as defining hunting zones, seasons and bag limits. The rules, designed to perpetuate hunted animal populations, divide hunting opportunities among participants and reduce the risk of accidents, are enforced by provincial game officers and federal migratory bird convention enforcement officers, including members of the RCMP. They are under continuing review by local clubs making up provincial fish and game associations, which are loosely affiliated to theCanadian Wildlife Federation. With the spread of human habitation and the growth of population, these rules tend to be increasingly restrictive over time.

Hunters and the general public are expected to participate in ensuring the rules are followed by exercising vigilance. In several provinces there are reward incentives for reporting infractions, including Alberta with its Report-a-Poacher program. The numbers of hunters, and the amounts of money spent on wildlife recreation generally, are declining in Canada. The data are somewhat sporadic, but a survey indicated that there were about 1.5 million hunters in Canada in 1991. In the mid-1980s close to half a million migratory game bird-hunting permits were sold annually: for 1991 the Canadian Wildlife Service reported just under 400 000 and for 1994 less than 260 000. In 1991, less than 16% of Canadians surveyed participated in hunting, compared to more than ¾ who enjoyed wildlife in other ways, such as bird watching. Personal expenditures on recreational hunting in 1991 totalled about $1.2 billion, or $767 per hunter.

Recreational hunting opportunities are found in all parts of Canada, except in preserves such as national parks and provincial wildlife reserves. All game resources are under provincial administration except migratory birds, which are managed by the Canadian Wildlife Service with the co-operation of the provinces. Populations ofwaterfowl, which breed in agricultural parts of Canada, have declined in recent years, and the conservation of wetlands, although greatly assisted by governments and by the private agency Ducks Unlimited(Canada), needs continuous effort. Arctic-nesting geese, particularly Canada geese and snow geese, although subject to the vagaries of weather on their breeding grounds, have prospered in contrast to southern-nesting species. As human populations and demand on limited hunting opportunities increase, there must be international co-operation to ensure equitable sharing of these migratory resources.

Canada also attracts hunters from all over the world to enjoy its unique hunting opportunities. There is little to compare with the sight and sound of flocks of geese called to the guns by skilled Cree guides at the goose camps of James Bay. An encounter with an excited, antlered bull makes a late September moose-calling hunt the experience of a lifetime. Superb landscapes await the hunter on a packhorse trip through mountain valleys searching the heights for bighorn or Dall rams. For the hardy and daring, a spring hunt for grizzly or polar bear is sure to prove memorable. However, not all Canadians approve of recreational hunting. Some are opposed to it on ethical grounds, and some Indigenous peoples are opposed to non-Indigenous peoples hunting because of violations to native treaty rights.

Canada possesses many upland game birds, from the rock and willow ptarmigan of the arctic tundra to the sage and sharp-tailed grouse of the short-grass prairies. They and the introduced gray partridge and ring-necked pheasant vary in numbers from year to year. There is a tendency for some species, particularly the ruffed grouse of the mixed forest and scrublands, to exhibit a cycle in numbers. These cycles may be related to similar rhythms shown by snowshoe-hare populations, and by their predators.

The most widely distributed big-game species of settled Canada is the white-tailed deer, formerly confined to the eastern provinces but now found as far west as the Okanagan Valley. The western mule deer is common in river valleys and rough terrain; in coastal BC, it is replaced by its relation, the black-tailed deer. The wapiti or elk formerly inhabited much of the western provinces and parts of Ontario and Québec, but healthy populations still persist in central Manitoba, the western Cordillera and the Cypress Hills. The moose, adapted to deep snow with its long legs and typical of boreal and subalpine forests, is well distributed from coast to coast, and now prospers in Newfoundland, to which it was successfully introduced in 1904.

Woodland caribou also frequent the boreal forest, but they need the old growth variety and their western range is shrinking with the extension of the logging industry, as it did many years ago in the eastern provinces. Barren-ground caribou migrate seasonally between the barrens, where they calve early in June, and the northern coniferous forest, where they pass the snowiest parts of winter. They are hunted only by Indigenous peoples and residents of the northern territories. The George River herd of Ungava caribou is hunted both by residents and nonresidents. Of more localized interest are the pronghorn of the southern prairies, the mountain goat, bighorn, stone and Dall sheep of the western Cordillera, and the muskox of the High Arctic. Other game species include black, grizzly and polar bears, grey wolf and cougar.