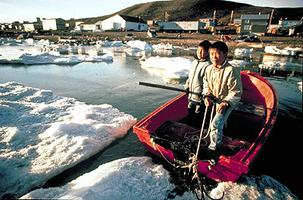 Community on the north coast of Baffin Island in Nunavut (photo by Barbara Brundege and Eugene Fisher). 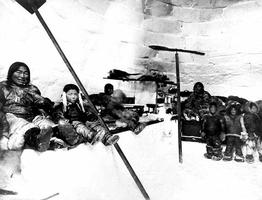 Iglulingmuit are known by the name of an important settlement site (Iglulik) which translates as "it has houses." Iglulingmuit country extends from Igluligaarjuk (formerly Chesterfield Inlet) on northwestern Hudson Bay northward along Melville Peninsula and across the northern third of Baffin Island. It is part of the Nunavut territory established by the Nunavut Act of June 1993 and the Iglulingmuit are beneficiaries under the Nunavut Land Settlement Agreement of the same date. Population estimates of about 500 were made in 1822 and in the 1920s. A dialect of Inuktitut is spoken and main contacts in traditional times were with the Baffin Island Inuit in the northwest and the Netsilingmiut in the southern part of the area. Intermarriage with those groups has occurred since the late 19th century. Important Iglulingmuit habitation sites have been used since as early as 2000 BC.

First European contact dates from the early 19th century. Explorers Parry, Rae and Hall visited the area, mapped its coastlines and made sufficient contact with the Inuit to induce a realization of a foreign culture which embraced metals. From 1860 to 1910 a number of US and Scottish whalers wintered in the area and were the first forces of change. After 1920 trade in white-fox furs and the influence of missionaries and police brought more change. The reports of the Danish Fifth Thule Expedition, 1921-24, are the main source of information on Iglulingmiut traditional culture. The oral traditions, religion, social and material culture differ only in details from that of neighbouring groups. However, occurrence of superior marine resources, especially walrus and several species of whales, made possible a high level of subsistence.

In recent years settlement, social and logistic factors have eliminated the nomadic lifestyle in favour of aggregation into permanent settlements which have concentrated around Repulse Bay, Mittimatalik [Pond Inlet], Hall Beach, Arctic Bay and Iglulik, which were formerly centres of trade. In 1972 Iglulik became the site of extensive scientific research with the studies of the International Biological Program. Later, a permanent research station was established. In 1974 a silver, lead and zinc mine was opened at Nanisivik on northern Baffin Island, providing employment for a number of Iglulingmiut until it closed in 2002.