The Kaska are a Dene (Athabaskan) people. The Dene are made up of several Indigenous groups that occupy the western subarctic region of Canada, as well as territory in Alaska and the American southwest. Before the arrival of Europeans, the Kaska Dena occupied and hunted in an area measuring approximately 240,000 km 2 of land in parts of present-day southern Northwest Territories (NT), southeastern Yukon (YT) and northwestern British Columbia (BC). In 1964, anthropologist J.J. Honingmann identified five groups of Kaska people that historically occupied territories around what is now Ross River (YT), the town of Faro (YT), Watson Lake (YT), Lower Post (BC) and Dease Lake (BC):

Espatodena or (E)spa’totena: These Kaska Dena peoples — the “dwellers amongst the wild goats” — primarily occupied the area north of the Tsa Tue (Beaver River, YT) and the South Nahanni River (NT). According to the Kaska History and Cultural Research Training Project (1997), a Dene people known as the Gata otena, “people who hunt rabbits,” also lived in these areas.

Naatitu a gotena (Natitu?a’gotena): Referred to as the “dwellers at a (high) sharp mountain where a little river starts,” the Naatitu a gotena lived primarily around the headwaters of the Liard River, YT, to the areas above Lower Post, BC. To the west of their territory were the Cassair Mountains ; to the east, the Simpson Range.

Ki stagotena (Ki’stagotena): Known as the “mountain dwellers,” the Ki stagotena traditionally occupied the valleys of the Dease River and the northern part of Dease Lake in BC.

Tse lona (Tse’lona): The “mountain top” people (also known as the “point at which is located the end of the world” people) lived primarily in the Rocky Mountain trench headwaters and valleys, as well as from the Kechika range to the Toad River and Flat River areas in BC.

Despite these group divisions, the Kaska considered themselves one nation (as they still do). Respective territorial boundaries were fluid; Kaska hunters from one group would travel to, and use, the resources from another group as often as necessary. It was only until the arrival of Europeans that traditional boundaries were redrawn to create towns and provinces that separated Kaska communities. ( See also Indigenous Territory).

Today, there are Five Kaska First Nations, all of which are represented by the political organization, Kaska Dena Council:

The Kaska lived in tents or sod houses that could be easily deconstructed and reconstructed as they moved from one hunting ground to another. (See alsoArchitectural History: Indigenous People.) They often travelled to trade and hunt by canoe during the warm months, and by snowshoe and toboggan in the winter. 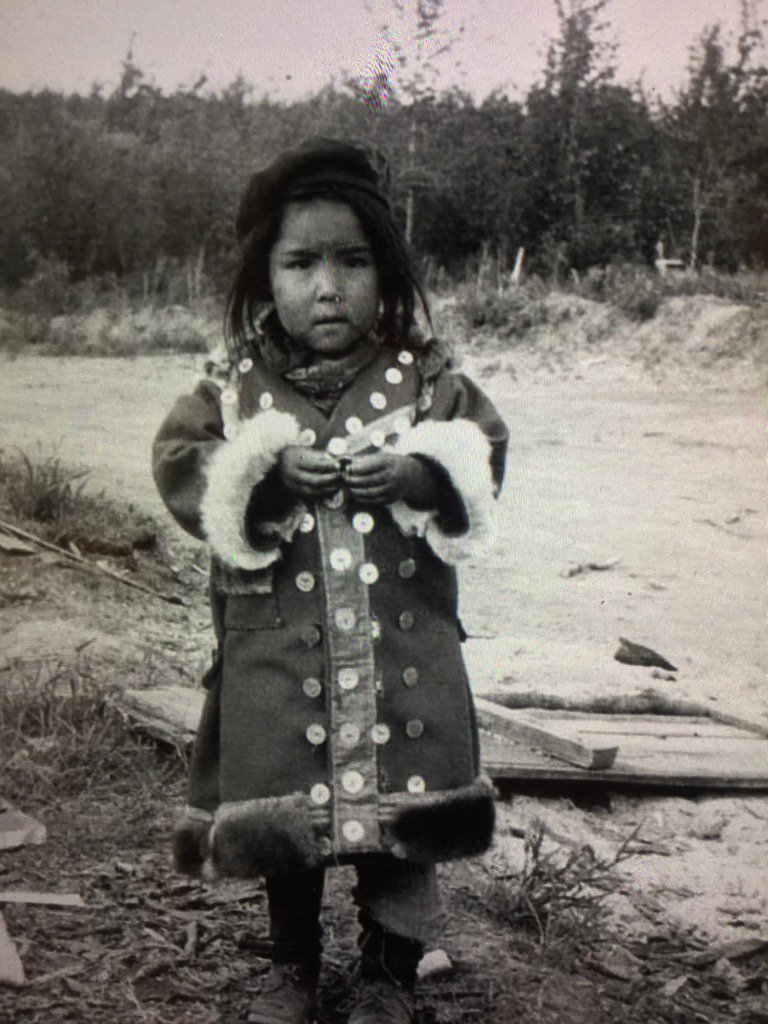 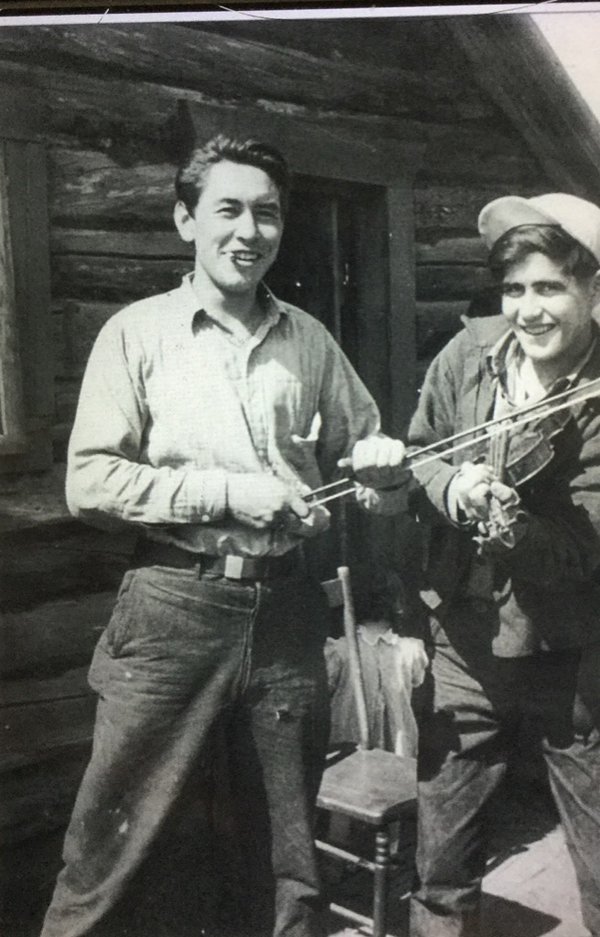 Two Kaska Dena men at Lower Post, BC, in 1945.
PreviousNext

The primary unit of Kaska society was the local band, consisting of an extended family with a male leader. Most Kaska also belonged to one of two moieties (kinship groups or clans) — Wolf and Raven (crow). These moieties were matrilineal, meaning that ancestry was traced through the female line (e.g., if a mother belonged to the Wolf moiety, her children were also Wolf members). Kaska moieties were also exogamous, meaning that a member of the Raven group could not marry another Raven; the same is true for the Wolf. Despite these clan affiliations, the rules governing marriage and other social customs were not always strictly observed. Today, Kaska bands (now known as First Nations) are governed by the Indian Act. An elected chief and council represent each Kaska nation in addition to that nation’s hereditary chief.

Kaska art is inspired by nature as well as by their history and heritage. Most Kaska art features natural products, such as hides, wood and antlers. Their ceremonial masks hold spiritual significance, as they are often used during prayers and rituals.

Drumming is also important to Kaska and Dene cultures. The drum beat represents the heartbeat of the nation, and unites the people in prayer and song. Formed in the late 1980s, the Kaska Dena Drummers are a locally well-known musical group that perform traditional songs.

Historically, the Kaska also participated in the potlatch — a cultural gift-giving ceremony. Potlatch was banned by the Indian Act until 1951. Many Indigenous communities have since resumed the practice.

According to Statistics Canada (2016), 185 people reported Kaska as their mother tongue. Since most Kaska speakers are elders, the language is in danger of extinction. From about 1942 to 1958, English displaced Kaska as the primary language of instruction in  residential schools, communities and places of business. The Kaska have since been actively involved in language revitalization efforts. In 1997, the Kaska Tribal Council (now Kaska Dena Council) and linguist Patrick Moore worked together to produce a noun dictionary, entitled Guzagi K’uge’, as a means of preserving the language. The Yukon Native Language Centre provides support for language learning, including workshops, booklets, multimedia and more. (See alsoIndigenous Languages in Canada.)

Kaska rituals and beliefs are similar to those of other Dene peoples, including the Denesuline (Chipewyan) and Slavey. Although many Kaska were converted to Christianity by missionaries in the 19th and 20th centuries, the Kaska have retained their Indigenous spirituality. The Kaska belief system centres on an all-powerful Creator figure, generally referred to as Denetia, meaning “Good Person.” The Kaska also believe in spiritual entities that can bring good or ill will. Shamans, known as the nedete (“dreamers”), are wise spiritual leaders, healers and clairvoyants who advise Kaska people on matters regarding their spiritual, emotional and physical wellbeing.

Oral tradition is an important part of Kaska culture and spirituality. Stories speak about the past and provide lessons or morals about living a good life. Legends explain the origins of the world and of all the creatures that live upon it. These stories are still passed down from generation to generation.

Different communities have different tales and origin stories, but there are some commonalities. For example, Beaver and Raven are recurring characters in many Kaska legends. Both Beaver and Raven are transformers, meaning that they can change from an animal to a human, and vice versa. Although these characters are usually described in tales as helpful to humans, Raven is also known as a trickster that often gets into trouble. (See alsoRaven Symbolism.)

Similarly, Kaska stories about the origin of the earth differ slightly, but generally describe a world where the earth was buried under water. The animals, including Beaver, Muskrat and the birds, wanted to get to the earth below, so they dove down as far down as they could, trying to reach it. None of them were successful. One day, a bird (known as Diver) ventured underwater in search of earth, where he stayed for six days. When he resurfaced, Diver’s animal friends found evidence of earth underneath his talons. The animals took this wet earth and molded it, creating the earth that we know today. Trees and plants grew on the wet earth as it dried, and both animals and humans thrived upon this new land.

In 1821, the Hudson’s Bay Company (HBC) began trading with the Nahanni — a now outdated term they used to refer to the Kaska people (and potentially to other Indigenous traders, such as the Southern Tutchone).

The presence of outsiders on Kaska territory increased in 1873, following the Cassiar District gold rush, when other First Nations, Métis, European and Chinese people entered the region. Roughly three years later, the HBC established trading posts at Lower Post and McDame Creek. By 1888, the number of gold miners had dwindled, but many Indigenous people, referred to as Cascar, remained. The ethnic backgrounds of the families associated with the Lower Post and McDame Creek trading posts were diverse, though Dene speakers made up the majority, but intermarriage between the offspring of the immigrants represented the first step towards integration of the communities. As wage-labour opportunities declined, hunting and fur trapping provided the most stable resources. Forced to share their land with settlers during this time, the Kaska were confined to certain communities and reserves, particularly in the Cassiar District of northwestern British Columbia.

During the first half of the 20th century, Euro-Canadian influences on Kaska people increased. Lower Post joined the air route between Edmonton and Whitehorse after the 1920s, opening that community to outside influences. During the Second World War period, trapping and wage- labour economies improved, as Watson Lake became a supply station during construction of the Alaska Highway and Lower Post, a depot. Governmental services increased dramatically during this time, and interactions with Euro-Canadians continued to be channelled into administrative and educational functions and mining operations.

During the early 1940s, many Kaska children were sent away to the Lower Post residential school, where they stayed until roughly the 1980s. Children were forbidden from speaking their mother tongues and from practising Indigenous religions. Many were physically, verbally and sexually abused. Residential school survivors now focus on bringing awareness to other Canadians about this dark moment in Canadian history, as a step towards reconciliation. (See alsoTruth and Reconciliation Commission.)

Starting in 1994, the Kaska Dena Council entered into the treaty negotiation process with the governments of Canada and British Columbia. The goal is to lay out the terms of a treaty that will specify rights to traditional lands and resources, structures of government, fiscal relations and more. Currently, the groups are at stage four in a six stage process. In 2013, the Kaska Dena Council signed an Incremental Treaty Agreement (ITA) with the Province of British Columbia while negotiations for a treaty continued. The ITA is not a treaty, but it provides treaty-related benefits to First Nations as they go through the treaty process.

Since 2006, the Kaska Dena have been involved in a land dispute over the western boundaries of Treaty 8. The Treaty 8 First Nations of West Moberly, Halfway River, Saulteau, Prophet River, Doig River and Fort Nelson argue that the true western boundary of the treaty lies along the Arctic-Pacific watershed. In 2005, these nations filed a lawsuit in the BC Supreme Court seeking a declaration of their territory. While the federal government agrees with these nations’ views on the boundary, the government of British Columbia and the Kaska Dena Council do not. Both have argued that the boundaries of Treaty 8 lay further east. Most of Kaska Dena traditional territory lies in the disputed western portion of Treaty 8; therefore, the resolution to this case is significant to Kaska nations. The trial began in 2014, but the issue is ongoing. 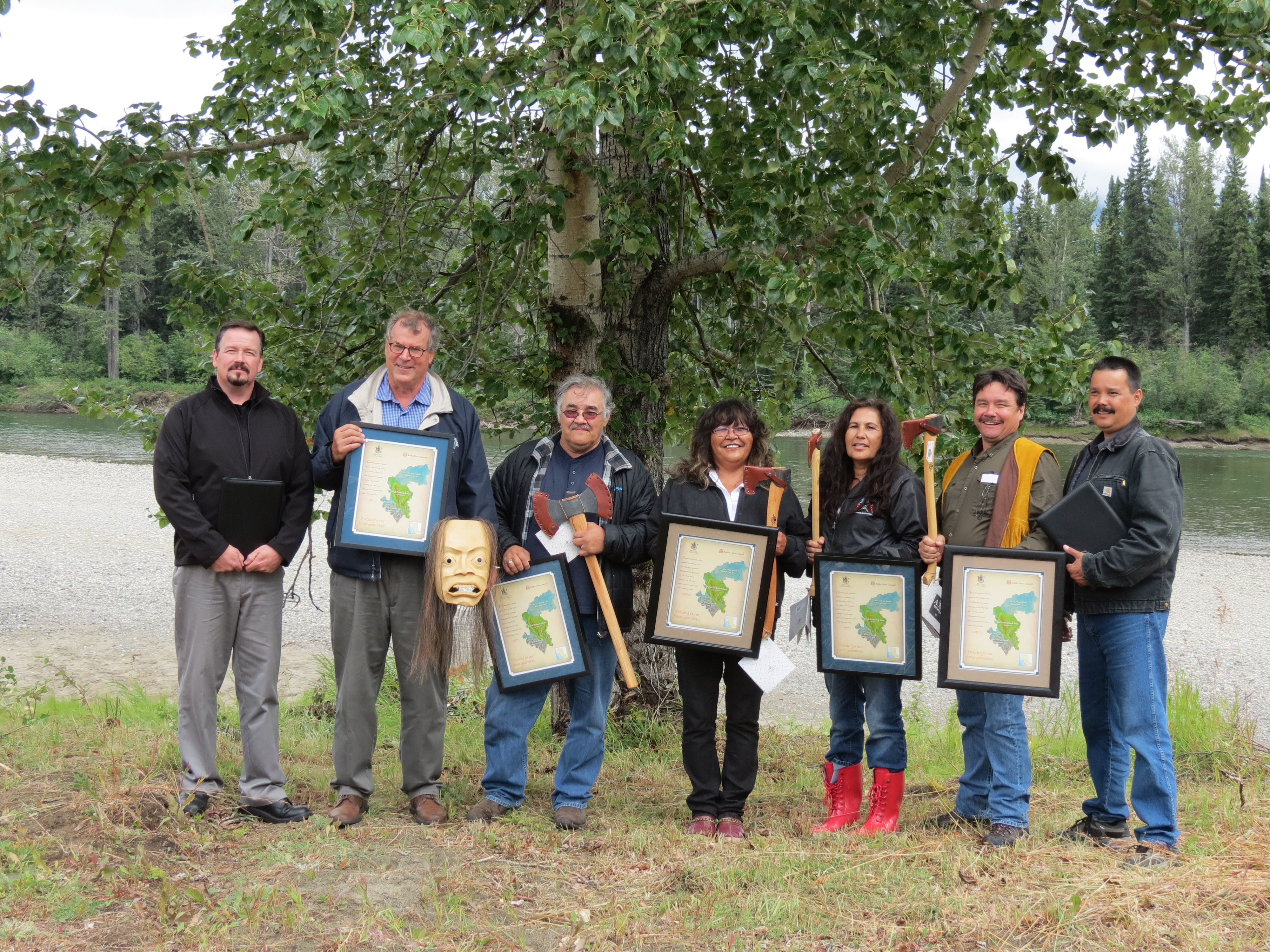 Representatives of the B.C. government and Kaska Dena First Nations strike a celebratory pose following signing of the Strategic Land Use Planning Agreement at the Rapid River Gathering Site (2012). 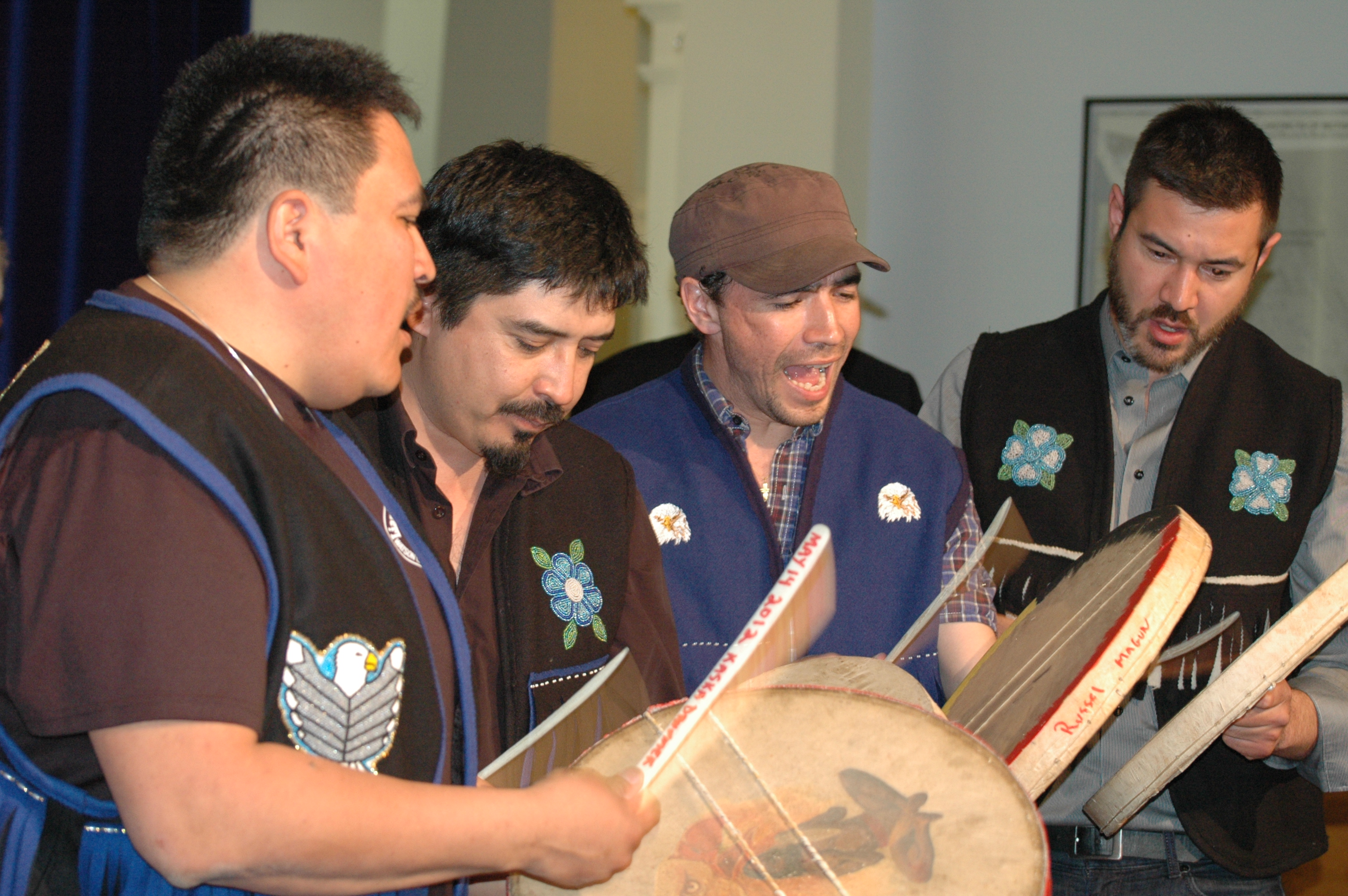 Since 1981, the Kaska Dena Council has represented the Kaska people in treaty negotiations with federal and provincial governments. The Council also promotes and protects Kaska culture, language and heritage, and works to provide social and community services. The Council has nine directors, including three elected executive officers.