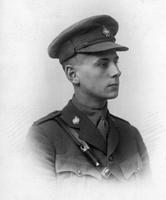 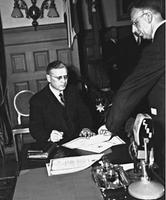 Leslie Miscampbell Frost, lawyer, politician, premier of Ontario 1949-61 (b at Orillia, Ont 20 Sept 1895; d at Lindsay, Ont 4 May 1973). After service in WWI and convalescence from a severe wound, Leslie Frost graduated from Osgoode Hall in 1921. With his brother he purchased a law practice in Lindsay and became an active member of the CONSERVATIVE PARTY. Elected to the legislature in 1937, he was appointed provincial treasurer and minister of mines in the Cabinet of George DREW in 1943. Six years later he became Conservative leader, inheriting the premiership. A genial master of pragmatic politics who personified the values of small-town Ontario, he led his party to 3 sweeping electoral victories. His governments initiated progressive legislation in health, education and human rights, and encouraged growth in the private economic sector through fiscal policy and public investment. Leslie Frost resigned as leader and premier in 1961.
×