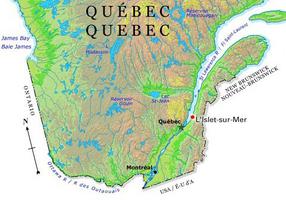 L'Islet, Qué, Municipality, pop 3866 (2001c), 3878 A (1996c), area 120.02 km2, on the South Shore of the ST LAWRENCE RIVER, 100 km east of Québec City, within the former seigneuries of L'Islet-St-Jean and Bonsecours (granted 1677). Before the arrival of the first resident parish priest in 1745, L'Islet was served by missionary priests, and the parish of Notre-Dame-de-Bon-Secours-de-L'Islet was founded in 1721. Until the end of the 19th century, agriculture was the principal economic activity.

The arrival of the railway in 1860 brought some industrial development: several brickworks exploited but soon exhausted the local clay deposits; a foundry that was in operation for several years has more recently become a trailer factory; a large cabinetmaking enterprise also established several shops in the village. These industries have had an influence on urbanization: in 1911 the village of L'Islet-sur-Mer separated from the parish municipality (est 1845), and in 1950 L'Islet-Station broke away, eventually becoming a town (L'Islet). In 2000 L'Islet-sur-Mer and L'Islet, along with the parish of Saint-Eugène, rejoined to form one municipality. The church, built in 1768, is a designated historic building and contains several religious masterpieces. A major maritime museum opened in 1970.