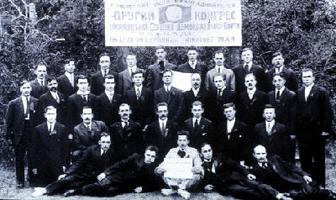 Marxism is a basic world view first developed by Karl Marx and Friedrich Engels in the 19th century and further developed by various scholars and political activists. It has spawned diverse movements, eg, Marxism-Leninism, Maoism, Trotskyism, Christian Marxism, Marxist Humanism, socialist feminism and eco-socialism, all of which can be found to some degree in Canada. Marxism was adopted as the official ideology of communist governments and movements around the world.

Marxism was brought to Canada by British worker intellectuals in the first years of the 20th century. It was the dominant ideology in the earliest socialist parties of Canada and was fully adopted by the COMMUNIST PARTY OF CANADA when it formed in 1921. As a social science, Marxism stagnated for the next half century, but it flourished in the 1970s and the early 1980s, gaining a significant presence in Canadian scholarship.

Marxism includes 4 interrelated parts: a method for understanding how societies evolve and change, an analysis of how the capitalist economy works, debate about how capitalism can be challenged and defeated, and reflection on the nature of a socialist or communist future. While there are many Marxisms, there is common agreement that Marxism includes the following 4 elements. The first is its materialist approach to history. The term "materialist" is not meant in the sense of what motivates people, but rather refers to the way we organize our economy, its materials, technology, labour skills and knowledge to produce our means of existence. This is termed the mode of production.

The second element is the importance attached to class division, the interaction of SOCIAL CLASSES in the economy - those who do the work and those who give the orders, those who sell their labour power and those who own the means of production as their private property, enabling them to exercise property rights over what is produced, how, by whom and where. This is termed the relations of production. Marxists believe that class conflict is inherent in capitalism and that class struggle is an important element of social change.

Together, the mode of production and the relations of production constitute the economic base which shapes the so-called superstructure. This includes the family system, the political and legal system, the culture and reigning ideology, the set of ideas that most people come to accept. The precise relationship between base and superstructure has always been a matter of debate among Marxists, but it may be seen as a constant interaction in which the base and superstructure influence each other. The Italian Marxist Antonio Gramsci emphasized that the battle of ideas and the struggle over control of the ideological superstructure, especially with the advent of mass media, was as important as control of the means of production. He held that capitalism's ideological and cultural hegemony are decisive factors in its domination of the population.

Marxism's third element is the dialectical approach to historical change. Social tensions and conflict within a society produce a struggle between elements of the old order ("thesis") and elements of the new order ("antithesis"), out of which may emerge a new form of society which is a synthesis of old and new. The resulting new order is bound to produce its own contradictions and new sources of conflict and struggle. But a particular society cannot be fully broken up until that society has produced the conditions which make its demise possible. Some Marxists opposed the Bolshevik revolution on the grounds that conditions in the Russia of 1917 could never produce the socialist society envisioned by Marx, Engels and their associates.

The fourth element of Marxism is its commitment to socialism. With this commitment comes the belief that it is not sufficient to study the world. Rather, Marxists should to work to change it. Marxism holds that the capitalist economy is inherently contradictory and that crises that generate conflict and struggle for change are inevitable. One contradiction arises from the competitive pressure on firms to expand their capacity to produce while at the same time constraining consumption by restricting what they pay their workers. The result can be crises of overproduction. A crisis can also arise if profits are reduced by rising costs at a time when those costs cannot be passed onto consumers. The effects of these crises, including a depressed economy and unemployment, can be offset by such means as marketing, product innovation, and the use of cheaper sources of materials and labour through a process of global expansion.

Eco-socialists argue that an ecological contradiction arises because, while nature has limited capacity to produce materials and energy and to absorb waste, firms must always seek to expand their markets, creating new needs and altering their instruments of production. The result is a "sapping of the original source of all wealth, the soil and the labour" (Capital, Vol 1).

Along with Marxism's economic and ecological critique is a moral condemnation of capitalism. The concern is not merely with the growing gap between rich and poor, but the alienating conditions of life and work: people have ever-diminished control over the tools they work with; less identity with products they have made, except as "objects of worship"; they have become alienated from each other, from themselves and from nature.

Marxists did not believe that capitalism must collapse and that socialist revolution was inevitable, only that capitalism has an inherent tendency towards economic and ecological crises. Revolution can only occur when vast numbers of workers and their allies have developed a revolutionary consciousness that tells them that only if they unite to end the capitalist system and create a classless society can they eliminate poverty, unemployment, inequality, alienation and environmental destruction.

The socialism envisioned by Marxism's founders would take not decades or even a century to evolve, but an entire epoch. It includes a planned economy that replaces markets and the profit system as the motor force of the economy; public ownership of the major means of production; and economic democracy with community control over economic priorities and worker control over the organization of work. Its ultimate governing principle is "from each according to his ability, to each according to his need."

While capitalism has experienced repeated crises over the past 200 years, these crises have not produced the hoped-for political revolutions, except in some of the least mature capitalist societies of the world, such as 1917 Russia, where the results were disastrous. During the Stalin years and beyond, Marxism became a religious faith rather than a social science and stagnated in Canada as it did elsewhere. The legacy of the USSR was to discredit the Marxist version of socialism. It also damaged other alternative movements for radical change.

The collapse of Soviet socialism in 1989 has produced not a western-style democratic capitalism but a gangster-ridden capitalism that has suffered a prolonged and catastrophic economic decline. Coincidentally, China has been converted to a one-party market socialism with rapid privatization of industry, a return to capitalistic labour markets and mass unemployment and to a regime of "special economic zones" where foreign capital is invited to exploit Chinese labour unprotected by regulation or minimum standards.

The rise of globalization in the 1990s, new financial crises and the growing polarization between rich and poor has brought about a renewed interest in Marxism, especially on the occasion of the 150th anniversary of the Communist Manifesto. Its insight into the functioning of the capitalist system has always been its enduring strength. But the growing fragmentation of the working class, the continuing inability to link peoples' everyday struggles to the coming of a socialist future, and the challenge of new currents such as post-modernism (which questions conflict) all combine to put the socialist movement on the defensive on the eve of the 21st century.