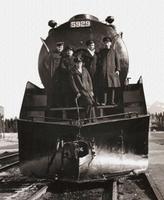 The Royal Canadian Navy Show Meet the Navy opened in Ottawa on 15 Sept 1943 at the Capitol Theatre (Ottawa), and during its year-long tour this cross-country travelling show entertained some 10 000 Canadians and enjoyed a brief stint overseas (photo courtesy Bill Barber).

Meet the Navy. Royal Canadian Navy musical revue produced during World War II under the supervision of Capt Joseph P. Connolly, director of Special Services for the RCN. Rehearsals began in June 1943 at Hart House in Toronto. The production staff and company were recognized officially, though somewhat after the fact, by a Government of Canada Treasury Board order-in-council, 13 Aug 1943, as 'an Establishment to be known as "The Navy Show" for the... Entertainment of Naval, Army and Air Force personnel on Active Service; Promotion of recruiting; [and] Maintenance of public morale and goodwill'.

The show itself, called Meet the Navy and directed by Louis Silver (a Hollywood producer) and Larry Ceballos (a Broadway choreographer), was premiered for servicemen 2 September at Toronto's Victoria Theatre and opened to the public 4 September. It opened in Ottawa 15 September at the Capitol Theatre (Ottawa). During a year-long national tour, which covered some 10,000 miles by train, Meet the Navy entertained about a half-million Canadians. It travelled in 1944 to Britain, opening 23 October in Glasgow and touring England (11 cities in the provinces), Ireland, and Wales and playing at the Hippodrome in London (1 Feb-7 Apr 1945, including a command performance 28 February). Performances followed in Paris' Théâtre Marigny, the Brussels Music Hall, and Amsterdam's Carré Theatre. Meet the Navy closed 12 September in Oldenburg in occupied Germany. In 1945 the NFB produced the film Meet the Navy on Tour. Though plans for a Broadway run fell through, the show itself was filmed in November in Britain.

Meet the Navy included skits, dance routines, and several songs: 'In Your Little Chapeau,' 'Rockettes and the Wrens,' 'Brothers-in-Arms,' 'Meet the Navy,' and 'Beauty on Duty,' all by R.W. Harwood (words) and P.E. Quinn (music); 'The Boys in the Bellbottom Trousers' by Quinn; 'Shore Leave' by Noel Langley and Henry Sherman (words) and Quinn; and the showstopper (sung by John Pratt) 'You'll Get Used to It', with words by Pratt to music by Freddy Grant. Eric Wild (who conducted the pit orchestra) and Robert Russell Bennett arranged the music.

After the London debut of Meet the Navy, Beverley Baxter wrote in the London Evening Standard: 'Why is this piece so exhilarating, so completely satisfying and, since the first class always touches the emotions, why was it so stirring? Perhaps the answer is that quite outside the professional slickness and the terrific pace of the whole thing, we were seeing the story of Canada unconsciously unfolding itself to our eyes'.

In 1980, to celebrate the 70th anniversary of the Canadian navy, the Nova Scotia government revived Meet the Navy with several members of the original cast.