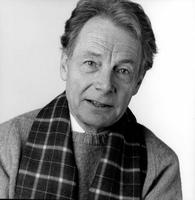 Michael Langham, theatre director (b at Bridgwater, Somerset, Eng 22 Aug 1919; d at Cranbrook, Kent 15 Jan 2011). Michael Langham was educated at Radley College and the University of London and studied law until enlisting in 1939. His interest in theatre developed while he was incarcerated for 5 years as a prisoner-of-war, and he launched his professional career running repertory theatres in Coventry (1946-48), Birmingham (1948-50) and Glasgow (1953-54). He first directed at Stratford-on-Avon in 1950, and made his West End and Old Vic debuts in London in 1951.

He succeeded Tyrone GUTHRIE as artistic director of the Ontario STRATFORD FESTIVAL (1955-67), doing stellar productions of Henry V (mixing a French and English cast), King Lear, Love's Labour's Lost and Cyrano de Bergerac, among others. He brought permanence and professionalism to the festival, overseeing the building of the mainstage Festival Theatre, and working with designer Tanya Moiseiwitsch on modifying and refining its thrust stage. He spearheaded the drive for a second performance space, leading to the purchase and renovation of the Avon Theatre.

Although he continued to mount television and stage plays in Britain, he became more permanently based in North America. In 1968 he staged The Prime of Miss Jean Brodie on Broadway and from 1971 to 1978 assumed the leadership of the Guthrie Theatre in Minneapolis. Further appointments included directorships in the Drama Division of New York's Juilliard School from 1979 to 1982 and, in 1983, the Dallas Theater Center. He returned to head the Juilliard from 1987 to 1992.

In 1995 the 75-year-old Langham became a consultant/advisor to the newly founded ATLANTIC THEATRE FESTIVAL in Wolfville, Nova Scotia, inaugurating their first season with acclaimed productions of The Tempest and The Cherry Orchard, the latter directed with his wife, comic actress Helen Burns. This highly successful tandem arrangement continued in Wolfville for A Doll's House (1996) and Uncle Vanya (1997), while Langham alone handled Shakespeare's Twelfth Night (1996). In 1997 Langham directed Othello for the CITADEL THEATRE in Edmonton, a production that was repeated at the Atlantic Theatre Festival in 1998.

Michael Langham directed 12 productions on Broadway; the last, in 1999, was Noël Coward's Waiting in the Wings, starring Lauren Bacall and Rosemary Harris.

He returned to the Stratford Festival in 2008 to stage his third production of Love's Labour's Lost. He also directed There Love Reigns, which starred English actor Simon Callow in a solo performance of Shakespeare's sonnets.

A demanding, disciplined director, Michael Langham combined a formidable intellect with a remarkable ability to lift Shakespeare's words from page to stage. Stratford artistic director Des MCANUFF described Langham as "the intellectual architect" of the festival. "It was Michael who articulated the approach to Shakespeare's text - a philosophy he described as 'living thought' - that to this day forms the aesthetic foundation of the classical work done at Stratford."

Stratford established the Michael Langham Workshop for Classical Direction in 2009 and dedicated its 2011 season to him.