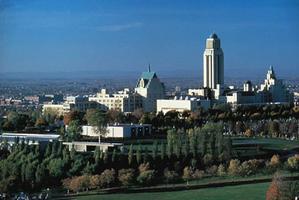 University of Montreal/Université de Montréal. Canada's largest French-language university, founded in 1919 by a rescript of Pope Benedict XV which made the branch established by Laval University in Montreal in 1876 an autonomous Roman Catholic institution. A third provincial charter (1967; the others were in 1920 and 1950) defined the University of Montreal as a public institution, dedicated to higher learning and research, in the administration of which students and teachers would have the right to participate. The university was housed 1876-95 in the Grand Séminaire de Montréal and 1895-1942 in a building on St-Denis St; from there it moved to the Mount Royal location it still occupied in 1980. In 1990-1 the university consisted of 12 undergraduate faculties leading to the baccalauréat; the faculty of graduate studies leading to master's and doctoral degrees; and two affiliated schools (Hautes Études commerciales and Polytechnique).

On an order from Paul-Émile Cardinal Léger the Faculty of Music was founded 18 Oct 1950 during the rectorship of Mgr Olivier Maurault, whose efforts to establish such a faculty dated from 1939 and became linked with those of the Diocesan Commission for Sacred Music in 1947. Besides organizing and administering its own study and research programs, the new faculty became responsible for co-ordinating the programs of study and academic standards in those schools of music that until then had been affiliated directly with the University of Montreal, the charter of 1950 having decreed that the affiliated schools 'are [now] affiliated by means of annexation to a Faculty' (ie, now express their affiliation by relating to a faculty rather than, as before, to the university as a whole). Thus the Conservatoire national de musique, the École normale de musique, the École Vincent-d'Indy, the Institut des Soeurs de Sainte-Anne in Lachine, the Présentation de Marie school in St-Hyacinthe, the Soeurs de l'Assomption school in Nicolet, the Ursulines school in Trois-Rivières, the Gregorian Institute (Toledo, O), the Institut Nazareth, and the Schola cantorum of Montreal all were annexed to the faculty. These affiliations were followed by those of the École de Sherbrooke, the École supérieur de musique de Hull, and the Collège de musique Ste-Croix in St-Laurent [Montreal].

Courses began 1 Feb 1951. The teaching program was divided into two sections, sacred music and secular music, and covered a comprehensive group of academic subjects. The only instruments taught were the piano and the organ. The faculty was directed until 1953 by Dean Alfred Bernier, who helped put it on a firm footing. A particular problem at that time was the intractability of the affiliated schools, which saw their autonomy curtailed by the existence of the faculty. Éthelbert Thibault succeeded Bernier for a short term (1953), after which Jean Papineau-Couture, secretary of the faculty, undertook its administration on an interim basis until 1955.

Clément Morin assumed the deanship in 1955 and immediately initiated a program for church musicians. In 1958 he inaugurated summer courses which attracted distinguished guest teachers to the faculty, and in 1961 he established courses in music pedagogy. During his 13 years as dean he devoted himself in particular to stabilization and to standardizing curricula at the affiliated schools.

In 1966 a revolution in the faculty's offerings brought about important changes in orientation and a complete reorganization of the undergraduate programs. Thenceforth the latter led to a B MUS: general, performance; composition theory; musicology (previously history and analysis). Courses in music pedagogy were integrated in 1967 into the university program for the secondary school teaching certificate (licence), a program later (1972) replaced by a BA with a major in music and a minor in education offered in collaboration with the Faculty of Education. It was also in 1967 that the affiliation of the music schools with the faculty was discontinued according to the terms of the new university charter.

Jean Papineau-Couture, dean 1968-73, gave new direction to the faculty by obtaining larger premises, increasing the number of full-time staff members from 6 to 18, introducing more flexibility into the programs, and developing several activities designed to make the faculty's work better known. The Nocturnales, begun in 1968, allowed members of the faculty to present evening concerts of traditional or contemporary works, some of them premieres, in a setting where listening often was enriched by visual elements. The Musialogues, organized by Maryvonne Kendergi, and begun in 1969 consisted of informal encounters with personalities from the arts world, from both Canada and abroad. The workshops in early music (Gerrit Tetenburg and Jean-Pierre Pinson), baroque music (Réjean Poirier), contemporary music (Lorraine Vaillancourt), acting and stage movement (Louise André and Marthe Forget), and jazz (Sayyd Abdul Al-Khabyyr) are offered as much to the faculty as to the community at large.

From 1977 the University of Montreal Orchestra has given many concerts, and was first conducted by Jean-Eudes Vaillancourt who was succeeded by Serge Garant, and later by Marc David. It has joined the 100-voice Chorale de la faculté on occasion to perform large choral-orchestral works, eg, Handel's Messiah. The choir was founded by Morin, who turned it over to Jean-François Sénart 1973-90, who was succeeded in turn by Alice Poulin-Parizeau 1990-1 and Patrick Wedd (1991-). It should not be confused with the Choeur bleu et or, a University of Montreal choir independent of the faculty, founded in 1949 by Robert Villeneuve, a medical student, directed by Fernand Graton after 1950, renamed the Choeur des étudiants in 1962, and discontinued in 1965.

A reorganization of faculty academic and administrative structures under the 1973-9 deanship of Gilles Manny was marked by procedures calling for collegial participation in management. The staff increased to 25, and enrolment grew rapidly to more than 400 students in 1978-9. A special emphasis was placed on the development of the master's and doctoral programs, following the establishment of the Faculty of Graduate Studies. (M MUS and D MUS in performance or composition, MA and PH D in musicology) and the establishment of research programs. These programs were concerned with music at the elementary level and the application of international techniques of creativity to musical training (Jean-Marie Cloutier and Sister Alix de Vaulchier), with music data processing (Papineau-Couture), with musical paleography (Clément Morin), with ethnomusicology (Charles Boilès and Ramón Pelinski), and with musical semiology ( Jean-Jacques Nattiez). Certain of these projects have benefited from special Canada Council or Quebec Ministry of Education grants.

The deans Henri Favre (1979-84) and Pierre Rolland (1984-8) were given the difficult mission of managing the faculty during the economic crisis which marked the 1980s and which severely affected the education sector. Despite restrictions, they succeeded in maintaining the requirements of the existing programs and thus encouraged a substantial increase of graduates, especially at the master's and doctoral levels. During this period, the faculty also introduced pop music and jazz by offering a program of studies in this field thanks to the initiative of the professors Robert Leroux and René Masino.

Since Robert Leroux began his mandate as dean in 1988, emphasis has been placed on the faculty's influence outside the institution. In 1989 the faculty designated the Nouvel ensemble moderne conducted by Lorraine Vaillancourt as the group-in-residence, and released, in 1991, the UMMUS record label (CDs and cassettes) whose goal is to promulgate the work of the faculty's performers and composers. Four titles in its three series, 'Actuelles,' 'Classiques,' and 'Traditions,' were issued in 1991. In addition to these initiatives, new programs have been set up: M MUS theory and DESS (diplôme en études supérieures spécialisées) in composition and in performance. The field of ethnomusicology has also been given new avenues of research through Monique Desrosches in particular. In 1990-1, the faculty comprised 35 regular teachers and some 80 lecturers who taught 533 regular and 70 independent students.

The Faculty of Music's pioneering course in sacred music, at one time the only one offered in a Canadian French-language university, broadened over the years into an early music study program under Clément Morin, Dujka Smoje, Gerrit Tetenburg, and Jean-Pierre Pinson. More recently, contemporary music has moved to the fore through the teaching of such leading figures as Garant, Maryvonne Kendergi, Papineau-Couture, André Prévost and Michel Longtin, as well as Robert Léonard who was a founding member of the Groupe informatique-musique and of the Atelier-laboratoire. The faculty became the first French-speaking university to offer, as early as 1966, a course in Canadian music taught by Maryvonne Kendergi and Marie Thérèse Lefebvre. In the area of performance Louise André, France Dion and Gaston Germain, Françoise Aubut (organ), Marcel Baillargeon (flute), Gisela Depkat (cello), Réjean Poirier (harpsichord and organ), Antoine Reboulot (organ and piano), Denis Regnaud (harpsichord and organ), Marc Durand, Gilles Manny, Natalie Pépin and Claude Savard (piano), Vladimir Landsman and Jacques Verdon (violin), and others have ensured a high calibre of instruction. Massimo Rossi was director of the classes in organology, harmony, orchestration, and instrumentation starting in 1964.

The need to expand facilities led in 1980 to the faculty's acquisition of the École Vincent-d'Indy and the adjoining Salle Claude-Champagne. The new quarters were opened to the students in Sep 1983. Studies are facilitated by a record collection, a library, two concert halls besides Salle Claude-Champagne, and elaborate audio-visual equipment, including research and electroacoustic composition studios and a professional recording studio under the direction of Myke Roy who succeeded Louise Gariépy and Michel Bédard. The faculty also owns three mechanical-action organs (one positif and two two-manual instruments) and a wide variety of percussion instruments, including a Balinese gamelan which was given by the Republic of Indonesia in 1986 following its use at Expo 86 in Vancouver. A gamelan.ensemble directed by the Balinese guest professor Wayan Suweca, and co-ordinated by José Evangelista, was set up the following year.

Before the disaffiliation of the music schools in 1967 the University of Montreal granted diplomas and external-examination certificates (including lauréats, baccalauréats, licences for theory, masters for performance, and doctorates) to the students at its affiliated schools. This system, established before the founding of the university's own Faculty of Music in 1950, continued afterwards. Under it Armand Pellerin, a student at the Institut Nazareth, in 1921 received the first B MUS, and Eugène Lapierre in 1930 received the first D MUS. Musicians who followed Lapierre's example included Charles Goulet in 1937, Leslie Bell in 1946, Félix-R. Bertrand in 1948, and G. Roy Fenwick in 1950. One of the first B MUS graduates after the founding of the faculty was Jean-Marie Cloutier in 1953. Among subsequent graduates were Luce Beaudet, José Evangelista, Marthe Forget, Albert Grenier, Marcelle Guertin, Louise Laplante, Denis Lorrain, Lyse Richer, Pierre Trochu, and Pauline Vaillancourt. From 1957 to 1991, 45 doctorate degrees (D MUS or PH D) were awarded, in particular, to Louise André, Alfred Garson, Louise Hirbour, Marie-Thérèse Lefebvre, Jean-Pierre Pinson, Michel Longtin, Anne Lauber, Monique Desroches and Myke Roy. Honorary doctorate degrees have been awarded by the University of M to Achille Fortier (1926), Wilfrid Pelletier (1936), Louisa Paquin (1937), Rosario Bourdon (1944), Claude Champagne (1946), Paul Doyon (1957), Gilles Vigneault (1981), Charles Dutoit (1984) and Maureer Forrester (1987). Louise André, Maryvonne Kendergi, Clément Morin and Jean Papineau-Couture have been named professor emeritus.

In1983, the archives and documentation of the Montreal office of EMC were located at the faculty of music of the University of Montreal.