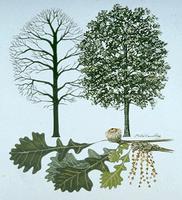 The Oak (Quercus) is a genus of trees and shrubs of the beech family (Fagaceae). Of the estimated 200 species found worldwide, 75-80 occur in North America and 10 in Canada. Canadian species grow very locally in Ontario and eastward, except Garry oak, found only in BC, and bur oak, which occurs as far west as Manitoba. Oaks are usually divided into 3 groups: red or black oaks (red, black and pin); white oaks (white, Garry and bur); and chestnut oaks (swamp white, chinquapin, dwarf cinquapin and chestnut). These beautiful trees have a fairly short trunk, a broad crown and alternate, simple, usually lobed leaves of variable shape and size. The acorns, produced in large quantities, are important to the diets of various wild animals.

Oaks are generally found in areas with moderate precipitation. They flourish on hillsides where the most suitable lighting and well-drained soil are found, except swamp white oak which prefers low, wet terrain. The hard, strong wood, highly valued for cabinetmaking and parquetry, is also used for casks for whisky. Known for its strength and longevity, the oak has been the national symbol of several peoples and is often referred to in literature. The generic name means "most excellent of trees."