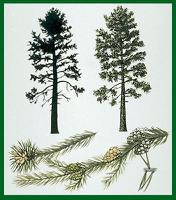 White pine was the most important tree in the timber trade because it is light but strong, and resistant to weathering. It was used in shipbuilding for masts and decking. By the end of the 19th century very few specimens remained (courtesy Ontario Ministry of Natural Resources).
PreviousNext

The pines (genus Pinus) are evergreen conifers for which the Pinaceae family is named. The 80-90 species occur in the Northern Hemisphere with 9 in Canada. Most pines are trees but some are shrubs. Long, needlelike leaves are found in clusters of 2-5 (rarely one) on dwarf shoots. Seed cones are woody, often with sharp spines on scales. Each scale bears 2, usually winged, seeds, maturing the year after pollination.

Eastern white pine provides a very valuable softwood. It was exported from New France as early as 1700, as well as being used in the colony for construction and shipbuilding. As a group, pines are still the most common Canadian conifers and yield lumber, pulp and paper.