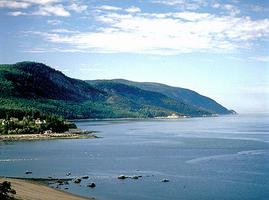 A river is a course of water, usually growing in volume between its source and its terminus in an ocean, a lake or another river. A stream or riverlet is smaller but the volumes involved are not closely defined.

Most rivers have continuous although variable flow, but some may have no flow in very dry or very cold seasons. Streams, especially in drier and colder regions, are more prone to no-flow periods and many are intermittent. Rivers and streams with large groundwater inflow are usually less variable in flow than those dependent on surface runoff. Running water has been dominant in the shaping of the Earth's landforms, but in most of Canada the impact of glaciation has been major and running water is only slowly changing the glaciated landforms.

Most rivers and streams in Canada occupy well-defined channels that they have developed since the last ice age (within the last 6000-14 000 years for most areas). Several regions have experienced extensive glacial rebound, which has affected the present course of major rivers. Some are "misfit" in large spillway channels that were formed by glacial meltwaters. Rapids and waterfalls separating stretches of marshes and lakes occur where rock formations resistant to erosion are present, especially in Shield and Cordilleran regions (see Physiographic Regions). They are less common in areas of deep drift deposits and softer rock, as in the Interior Plains, where channels are more regular in gradient. Some rivers with heavy sediment loads are locally braided and many divide into distributary channels in deltas.

The rivers originating in Canada discharge approximately 105 135 m3/s (cubic metres per second) of flow to the ocean, which amounts to about 8% of world river discharge. The St Lawrence and Mackenzie rivers, each with approximately 10 000 m3/s, rank 16th and 17th among world rivers, 2nd and 3rd in North America. The Amazon is over 20 times as large as our largest river and the Mississippi is about 75% larger. The St Lawrence and Mackenzie rivers are approximately equal in annual flow, and arguments about which is larger depend upon semantic differences, such as where in the St Lawrence estuary the water becomes brackish, and if the Peel and other tributaries of the Mackenzie Delta, entering below where the main channel divides, should be counted. The Mackenzie River is more variable in flow, being larger in some years and smaller in others.

Almost three-quarters of Canada is drained northward to the Arctic Ocean, Hudson Bay and Hudson Strait. This northward drainage involves almost half (48.6%) of the total flow of Canada's rivers. Drainage to the Pacific (10.2% of the area) accounts for almost one-quarter of the flow (23.7%); drainage to the Atlantic (15.2% of the area), for over one-quarter (27.7%). A very small area is drained southward in the Missouri-Mississippi Basin. More recent measurements show that the earlier estimates for northern and Pacific regions and for Canada as a whole were too conservative, and that northern values especially might be increased substantially (possibly as much as 20% for some basins). Upward revisions might be expected as better, longer-term data become available. Canada has abundant freshwater supplies and, although regional shortages will be experienced, national shortages are unlikely.

Most of the rivers and streams of Canada have snowmelt regime patterns of flow. Winter snows, subject to very little evapotranspiration loss, provide the peak flows on melting in March-April in southern lowlands, and in May-June, extending into July, in higher mountain and northern areas. Summer rains are greater than winter snowfall in most regions, but much of the rain is lost to evapotranspiration in summer and streamflow response is smaller (see Climate). Some rivers at lower elevations in Pacific coastal areas have rainfall-based peaks of flow in midwinter. Glacier meltwater flows peak in midsummer, but this pattern is not dominant for most of the larger mountain rivers. Natural storage in groundwater aquifers, lakes and marshes results in reduced peaks and more equable flow.

Artificial storage behind dams has contributed to major regime modification (see Reservoir). Much of the storage change is for hydroelectric power production and winter flow enhancement is widely present. Storage for peaking power purposes may result in low flows at night and on weekends and major surges in flow during periods of peak demand. Such flow modification, as on the Kananaskis River, Alta, may conflict greatly with recreation, wildlife conservation and other objectives. Storage for irrigation purposes is usually for mid- to late-summer periods when natural flow is declining.

The larger Canadian rivers have some natural lag in flow because of the size of their basins and the distances travelled by streamflow to downstream stations. Most have been modified in regime and sometimes volume by artificial storage and diversion. Interbasin transfers, largely for hydroelectric power and irrigation, and growing diversions for urban, industrial and other uses have affected the flow of many rivers. Some of the greatest impacts have been from the discharge of pollutants (see Pollution). Natural processes contributing dissolved and suspended materials to rivers and streams have always resulted in striking regional and seasonal differences in water quality. Canadian Shield rivers tend to be low in sediment, dissolved solids, calcium carbonate and turbidity; prairie rivers are high in each.

Human activity has added, directly and indirectly, to these substances, and chemical, physical and biological changes in water bodies have been apparent in many areas. Rivers and streams have been used as convenient means of waste disposal. The capacity of some water bodies to assimilate waste has been widely and carelessly exceeded. Most industrial, municipal, agricultural and mining waste disposal can be controlled at the source (see Water Treatment). Nonpoint pollution such as that from the atmosphere (eg, Acid Rain), storm sewers and ill-defined sources is more difficult to control. Good progress is being made in the treatment of some wastes, but the development of new chemical compounds is rapid; fortunately, public awareness of new hazards is growing.