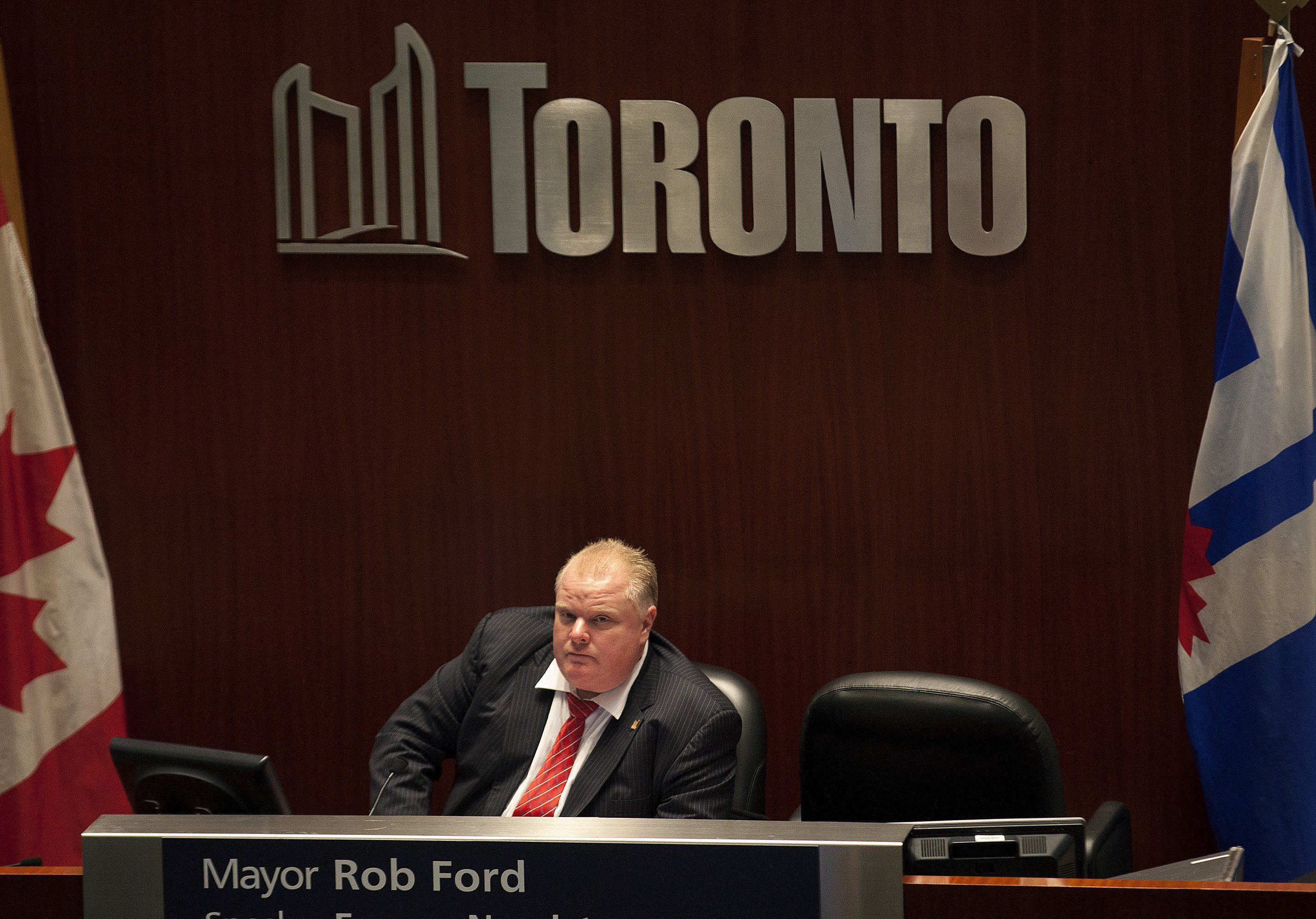 Robert Bruce Ford, municipal politician, mayor of Toronto 2010–2014 (born 28 May 1969 in Etobicoke, ON; died 22 March 2016 in Toronto, ON). A populist in the conservative vein, Ford’s defiance of convention and his tabloid celebrity made him a unique figure in modern Canadian politics. He acquired international notoriety when it emerged he had abused alcohol and drugs, including crack cocaine, while in office.

Ford was raised in a staunchly conservative family in Etobicoke, Ontario, the youngest of four children. The family was comfortably well off thanks to the success of his father Douglas Sr.’s business, Deco Labels & Tags. Ford dreamed of a career in football, but after one year at Carleton University in Ottawa, where he made the college team but perhaps never played in a game, Ford quit and took a sales job at Deco.

The family became active in politics in the 1990s. Ford's father sat as a member of the Ontario legislature from 1995 to 1999, in the Progressive Conservative government led by Mike Harris. In 1997, Ford himself ran unsuccessfully for a council seat in the newly amalgamated city of Toronto, which for the first time included the previously independent municipality of Etobicoke. He ran again in 2000 and won. His brother Doug became a Toronto city councillor in 2010.

Thus began three consecutive council terms, during which Ford’s unwavering fiscal conservatism was eclipsed only by his reputation for gracelessness. He won admirers for refusing to spend his taxpayer-funded office allowance, yet offended many Asians by referring to them as “Orientals” who “work like dogs.” In 2006, during a debate over city funding for AIDS prevention, he remarked that people who are “not doing needles” and “not gay” probably wouldn’t get the disease (he later apologized).

Away from council, Ford, a married father of two children, appeared to be overindulging in alcohol and using illegal drugs. In 1999, he was arrested for drunk driving while on vacation in Florida; at the time, police found a small amount of marijuana with him, yet withdrew a possession charge when he pleaded no contest to driving under the influence. In 2006, an apparently drunken Ford was ejected from the Air Canada Centre arena after insulting a couple seated near him during a Toronto Maple Leafs hockey game.

Despite his public blunders, Ford’s unyielding opposition to tax hikes and new city spending attracted a dedicated following, especially among the city’s growing population of working class immigrants. In 2010, he ran for mayor under the slogan “stop the gravy train” — a reference to the perceived heavy spending of the previous administration led by David Miller. Ford enjoyed help from veteran conservative campaign strategists and swept to power with 47 per cent of the vote.

His 2010 victory exposed deep divisions between residents of Toronto’s downtown — many of whom supported investment of public money in city services — and less affluent suburbanites who sought to curb their spiralling tax bills. That divide tinged debate over key issues such as transit expansion in the suburbs, with Ford supporting subways over light-rail trains, which he portrayed as inferior.

As mayor, Ford fought the power of public sector unions, pushed for tax freezes, cut city hall expense accounts, and pushed through the privatization of some garbage collection. He also raised user fees for recreation programs. Although the pace of spending growth slowed during his term as mayor, overall spending continued to rise in the three budgets he presided over, from 2011 to 2013.

His most ardent critics, meanwhile, sought ways to neutralize him, culminating in a 2012 conflict-of-interest case involving Ford’s use of his office letterhead to raise funds for his youth football foundation, and soliciting donations for the foundation from lobbyists and their clients. A judge found Ford had inappropriately participated in a debate over whether he should repay certain donations — a decision that would have forced his resignation — but that finding was overturned on appeal and Ford remained in office.

In early 2012, more accounts surfaced of Ford appearing intoxicated in public. On 17 March, he was seen reeling at a St. Patrick’s Day party at a downtown bar; one year later, he was asked to leave a military ball because he appeared inebriated. Pictures of him in various states of dishevelment circulated on social media, and one former mayoral candidate, Sarah Thomson, claimed an intoxicated Ford had touched her and made lewd innuendo during a political fundraising event.

On 16 May 2013, Ford made headlines around the world when the US-based Gawker website and the Toronto Star newspaper both reported they’d been offered for purchase video footage showing Ford smoking crack cocaine. Ford issued a denial: “I do not smoke crack cocaine, nor am I an addict of crack cocaine.” But the news led a cascade of revelations in the ensuing months, including media stories suggesting he had consorted with criminals and spent time in a reputed drug house. Twitter and YouTube users posted photos and video showing the mayor intoxicated during a summer festival in the city’s Danforth neighbourhood.

On Halloween day, Chief Bill Blair of the city police announced that officers investigating an alleged drug gang in Etobicoke had turned up digital footage “consistent with what has previously been reported” in the media — the reputed crack video. The police also said they had arrested Ford’s friend and driver, Alessandro “Sandro” Lisi, on a charge of extortion related to the video.

With that, Ford made an impromptu appearance before reporters, admitting he had indeed used crack in the past, “probably in one of my drunken stupors.” Still, he refused to resign, and with no legal mechanism to remove him from office, city council settled for stripping him of key executive powers. Ford vowed to quit drinking.

Court documents also surfaced showing police had spent the past few months secretly trailing Ford and Lisi, watching as they drank together during office hours, and as Lisi dropped suspicious-looking packages in Ford’s vehicle. In January 2014, footage shot on a smart phone surfaced showing Ford drunkenly railing against Chief Blair in a Jamaican patois.

Reaction to Ford was not uniformly negative. His large girth and his defiance of convention had won him a cult following around the world, making him a favourite topic of late-night television comics. In March 2014, he appeared on Jimmy Kimmel Live, where he brushed off the American host’s questions about his behaviour, saying: “I wasn’t elected to be perfect.”

Ford sought treatment at an in-patient rehabilitation centre near Bala, Ontario — taking leave from his position as mayor and re-election candidate, even though the 2014 mayoral campaign was in full swing. Despite his well-publicized personal problems, opinion surveys in the spring of 2014 suggested he was running a strong third in the race, behind opponents Olivia Chow and John Tory, with the support of about 20 per cent of decided voters.

In late May, his brother Doug revealed that Ford would return to the mayor’s office and resume campaigning on 30 June. In an interview with the CBC on 2 July, Ford said he had a drug and alcohol addiction that he would battle for the rest of his life. "I was born with this disease, I'm going to die with this disease."

In September, Ford was diagnosed with a liposarcoma (cancer) and withdrew from the mayoral race, to be replaced by his brother, Doug. Despite his diagnosis, Ford announced that he would run for election to Toronto council in Ward 2 (Etobicoke North).

Some political observers believe Ford’s rise, and his enduring base of support, reflect the ascendance of politics driven by the Internet and social media, where issues of personal conduct and morality take a back seat to celebrity.

Many analysts agree that Ford proved the value of so-called wedge politics in Toronto, exposing differences in class and values in a city once seen as a bastion of liberal values. In doing so, supporters argue, he gave voice to an often-ignored part of the electorate.

Critics, however, counter that he needlessly sowed division, while his personal misbehavior damaged Toronto’s reputation as an orderly and cosmopolitan city.