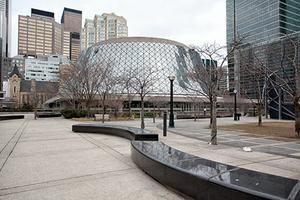 Roy Thomson Hall. 2,630-seat Toronto concert hall, located in the block bounded by King, Simcoe and Wellington streets. It is managed by The Corporation of Massey Hall and Roy Thomson Hall and is home to the Toronto Symphony Orchestra (TSO) and the Toronto Mendelssohn Choir. Fundraising for the $57-million building began in 1977 with Pierre Trudeau, William Davis, Paul Godfrey, and David Crombie as honorary chairs. Construction began in 1978. The hall was named after Roy Herbert Thomson, father of Ken Thomson shortly before its inauguration, 13 Sep 1982, to recognize a $4.5-million donation from the Thomson family.

Designed by architects Arthur Erickson/Mathers and Haldenby (Toronto) and acoustician Theodore J. Schultz of Bolt, Beranek and Newman Inc (New York), Roy Thomson Hall features a distinctive curvilinear honeycombed glass canopy, which encases the lobby areas and the auditorium. Prior to major renovations in 2002, the spherical concrete hall had a capacity of 2,812 with main floor continental seating for 1,095, 9 projecting mezzanine "pods" with 670 seats, an 11-section, horseshoe-shaped balcony with 928 seats, and 119 non-subscription seats in the choir loft that surrounded the stage. The latter measured 24.3 metres wide at the front, 14.7 metres at the back, and 11.4 metres deep. Its acoustics were controlled by adjustable reflective acrylic discs, suspended over the stage, and by retractable fabric banners. The hall was designed to be accessible to all patrons and performers.

The hall often received criticism, particularly from the TSO, for its stark aesthetic and cold acoustics. Plans for the renovation were initiated in 1989 and Roy Thomson Hall was closed 11 Mar-9 Aug 2002. The hall reopened with a gala concert September 21. The $24-million renovation project, directed by acousticians Artec Consultants Inc (New York) and architects Kuwabara Payne McKenna Blumberg (Toronto), entailed an overhaul of the auditorium's acoustic design, size and shape. The acrylic sound reflectors were replaced by two large adjustable wooden canopies, one in the centre of the hall and the other over the stage; the stage was extended into the audience by three feet and refinished, along with the floors, in a resonant Canadian maple; the continental seating was reconfigured; and the auditorium was isolated from the rest of the building to eliminate extraneous noise. Most significant was the addition of 23 wooden bulkheads to the balcony level, which gave the hall a narrow "shoe box" shape and reduced its volume to 850,000 cubic feet and its seating capacity to a more intimate 2,630. A new reception lounge completed the renovation in 2004.

A large rehearsal hall, green room, dressing rooms, extensive musician support areas and backstage facilities (including a broadcast and recording area), as well as the corporate offices, and the offices, libraries and archives of its two major tenants are all located on a lower level.

The centrepiece of the auditorium is the organ, built by Gabriel Kney, with assistance in its tonal design from Andrew Davis and Hugh McLean. It has four manuals, a pedal keyboard, 71 stops, and 5,207 pipes. There are two consoles: the fixed gallery keyboard which controls the organ's mechanical tracker action; and a moveable electronic keyboard for use at stage level. The organ was re-voiced by Kney during the renovations of 2002. Roy Thomson Hall acquired its Yamaha CF-2 concert grand piano from the estate of Glenn Gould in 1983.

The first concert in the gala opening festival, 13-25 Sep 1982, included two commissions: Fanfare by Ray Luedeke for the Toronto Symphony, and Sun by R. Murray Schafer for the Toronto Mendelssohn Choir. Anne Murray, Canadian Brass, Gordon Lightfoot, Raffi, a Canadian Opera Company concert production of Capriccio, and the Elmer Iseler Singers, were among the performers who appeared in what was a foretaste of the variety of events that have continued to take place in a hall that is seldom dark.

Begun in 1999, the "Share the Music" program has offered free performances at Roy Thomson Hall to children ages 8-18.

As chair (1972-88) of the Massey Hall board, Edward A. Pickering was the major figure in the realization of a new concert hall for Toronto. He remained president of the corporation and chair of the board until he was succeeded in 1988 by John B. Lawson. General managers of Roy Thomson Hall have been William Armstrong 1981-3, Geoffrey F. Butler 1983-9 (who was executive director 1990-1) and A. David M. Taylor 1989-91. Muriel Sherrin was appointed artistic director in 1990. Charles S. Cutts became CEO and president in 1992, a position he retained in 2012.

The Corporation of Massey Hall and Roy Thomson Hall is a not for profit charitable organization, with a professional management team and a volunteer board.