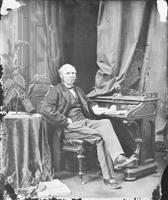 Frederic Carter’s family emigrated from Devon in the southwest of England in the mid-1700s and established themselves as prominent merchants in Ferryland, on Newfoundland’s Avalon Peninsula, and in St. John’s. Carter’s grandfather, William Carter, was a judge of the Newfoundland vice-admiralty court. Both his father, Peter Weston Carter, and his uncle, Robert Carter, held positions as magistrates, in St. John’s and Ferryland respectively. Carter trained for the legal profession in St. John’s with Bryan Robinson, whom Carter would succeed on the Supreme Court of Newfoundland when Robinson retired. In 1842, on Carter’s return from a year spent in England, where he continued studying the law, he was admitted to the Newfoundland Bar. In 1846, he married Eliza Walters Bayley; they had 11 children.

Frederic Carter was elected to the Newfoundland Assembly in 1855, running unopposed in the riding of Trinity Bay. His uncle Robert was elected at the same time to represent Bonavista Bay (which he had represented from 1842 to 1852). Carter continued to hold an Assembly seat until 1878, when he was appointed to the bench. From 1865 to 1870, and again from 1874 to 1878, he was premier and attorney general. In his first term in the Assembly, as a member of the opposition, Carter repeatedly introduced legislation to prevent salaried government officials from also sitting in the Assembly. The bill, dubbed “Carter’s purge,” was voted down by a Liberal majority that used the power of patronage appointments to secure party loyalty. In 1861, the Conservatives, led by Carter’s close friend, Hugh William Hoyles, secured a majority in the Assembly. Carter was chosen as Speaker of the House and his uncle Robert held the post of colonial secretary in Hoyles’ Executive Council (Cabinet). The following year, the new government passed Carter’s proposed legislation.

Premier Hugh William Hoyles chose Frederic Carter, an Anglican and a Conservative, and Ambrose Shea, a Catholic and a Liberal, to attend the Québec Conference in October 1864. Both returned convinced that Newfoundland should join Confederation. Newfoundland delegates had not attended the Charlottetown Conference that September, and Carter and Shea attended the Québec Conference as observers without authority to make any commitments binding on the Newfoundland government. Both Ambrose and Carter were convinced of the merits of the Confederation idea, and signed the resolutions adopted at the Québec Conference to demonstrate their individual support. On the banquet circuit after the Québec Conference, Carter stated his hope that membership in a broader North American polity would, by ending the colony’s isolation, strengthen and diversify its economic base and lift its political discourse above narrow partisan squabbling. Carter brought back positive impressions of Confederation, which were debated in the Assembly in St. John's, where his enthusiasm was not widely shared.

Carter, who succeeded Hoyles as premier in 1865, wisely avoided talk of Confederation in the 1865 election, and the Conservatives won the election. On 1 July 1867, when the new Canadian nation came into existence, neither Newfoundland nor Prince Edward Island joined Confederation.

Prior to the next election in 1869, Carter obtained approval in the Newfoundland Assembly and also from the Canadian government for terms on which Newfoundland would join Confederation; Carter presented the terms to the electorate as an improvement on those negotiated at the Quebec Conference. Although elections in Newfoundland were traditionally held at the end of the fishing season, Conservative politicians urged Carter to hold a spring vote, before the anti-Confederates could organize an effective opposition. Carter refused, determined to let voters make the decision. In the end, the anti-Confederates, led by Charles James Fox Bennett, won 21 of the 30 seats. Carter retained his seat in Burin, which he had represented since 1865, with a tiny and perhaps legally dubious majority.

As premier, Frederic Carter distributed official positions and public money among the colony’s three major religious denominations — Catholic, Anglican, and Methodist — on a proportional basis, and guaranteed public funding for separate denominational schools for each group. Carter’s government also enacted legislation that greatly reduced the availability of relief to the able-bodied, to the satisfaction of much of the merchant community but to the great distress of the poor.

During Carter’s term as premier, he obtained some imperial recognition of the colony’s right to assert authority over what was called “the French Shore.” Under the Treaty of Versailles (1783), French nationals had rights to fish and to use the shore for purposes connected to fishing in an area running from Cape St. John, on the Island’s northeast coast, around to Cape Ray on the southwest. The Newfoundland government was bound by these imperial treaties, but in 1877, Carter obtained approval to appoint magistrates to enforce Newfoundland law on the French Shore. While seated in opposition in 1871, Carter opposed the provisions of the Treaty of Washington, negotiated between Britain and the United States, which gave Americans access to Newfoundland’s inshore fisheries (see History of Commercial Fisheries). Back in office, Carter’s government created bounties that helped subsidize Newfoundland fishers to compete with the Americans.

Carter was appointed to the Newfoundland Supreme Court in 1878, and the same year was made a Knight Commander of the Order of St. Michael and St. George. He became chief justice in 1880, succeeding Hugh William Hoyles. Carter retired in 1898 and died two years later.

Frederic Bowker Terrington Carter failed to bring Newfoundland into Confederation, in part because he refused to manipulate the electoral process to his advantage. By offering places in his cabinet to Catholic leaders of the Liberal opposition, and by ensuring that civil service appointments were distributed among the colony’s main Christian denominations, Carter helped minimize the importance of religious divisions in electoral politics. His support for denominational rather than public schools, however, reinforced religious identities as sources of division and mutual suspicion in the colony.