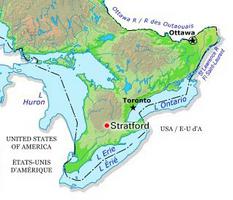 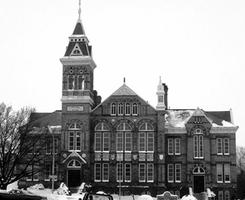 Stratford, Ont. Ontario town (Little Thames until 1831) located on the Avon River 75 kilometres west of Hamilton, in Perth County, and incorporated as a city in 1885. It was the site of railway shops ca. 1871-1964 and became the home of the Stratford Festival in 1953. The extraordinary and continuing success of the festival gave the city a new economic focus and an international prestige enjoyed by few if any Canadian towns of comparable size (population 30,461 in 2006).

Stratford's first band is believed to have been formed about 1850 when the population was less than 1,000. A Stratford band was bold enough to travel 700 kilometres in 1878 to compete in a festival in Montreal. By 1900 there was a short-lived orchestra of 50 directed by a blind conductor, Roger W. Roberts, who also owned the town's music store. Other bands in the area included the Brodhagen Brass Band (1905); the New Hamburg City Band (1908); the Grand Trunk Railway Concert Band (1871) (the Canadian National Railway Employees' Band after 1923, whose conductors included Charles Bird); and the Stratford Boys' Band, directed by James Malone. The first open band shell in Canada, after which the shell at the Canadian National Exhibition was modelled, was built in Stratford in 1929.

Stratford's earliest performances were held at the Town Hall (now City Hall) (400 to 500 seats, built in 1857) and the Theatre Albert (1,100 seats, 1901, also known as the Opera House or the Brandenburger Theatre). The Theatre Albert in its first 25 years housed locally produced musicals by the GTR Minstrels and other groups, sponsored by such organizations as the Imperial Order of Daughters of the Empire and the Knights of Pythias. It also provided a stage for touring productions by The Dumbells and the San Francisco Opera. Later becoming a movie house, Theatre Albert was rented 1956-63, then purchased by the Stratford Festival in 1963, and was renovated and renamed the Avon Theatre. The 1,083-seat Avon Theatre was renovated again in 2002 in celebration of the festival's 50th anniversary. A variety of other indoor and outdoor venues have housed concerts in Stratford. These include the Stratford Kiwanis Club outdoor pavilion (completed in 1987), the Festival Theatre, a number of local churches and restaurants, as well as the Avon River Park and Tom Patterson Island (both venues for the Stratford Summer Music festival, begun 2001). Stratford was also on the Chautauqua Ontario summer circuit.

Until World War Two, music was largely the domain of church organists, who, in addition to their appointed duties, taught, supervised public and normal school music programs, administered festivals, and conducted choirs, orchestras, and massed groups in performances of oratorios and operettas. In 1887 a choir of 1,000 children and 1,000 adults performed under the baton of W.J. Freeland (Stratford's first school music director) at a public school concert in the skating rink. Freeland also formed the Stratford Juvenile Select Choir, which presented a cantata at the Town Hall in 1889.

James Bottomley, Freeland's successor, continued the annual school concerts and organized the Stratford Public Schools Music Contest 1901-12. He also initiated annual Good Friday performances of Stainer's The Crucifixion, Rossini's Stabat Mater, and other works. These concerts, which combined all of the city's church choirs, continued until 1946, under the direction of L.R. Bridgeman, Talman J. Gotby, and others. Bottomley's Men's Choral Union and Masonic Temple Choir both were formed in 1918. The latter, under the direction of Frank Creasy and Peter Wilson, presented operettas of Gilbert and Sullivan.

W.B. Rothwell was director of music 1923-50 at the Normal School, succeeding Bottomley. Rothwell supported the 1926 founding of the Perth County Music Teachers' Federation (later Stratford Music Teachers' Association) and was president 1927-30 and 1940-6 of its first project, the Perth County Music Festival (later the Stratford Music Festival and finally the Kiwanis Music Festival). In 1942 Rothwell was national president for Kiwanis festivals. He also founded, and directed 1935-45, the 40-voice Stratford Ladies' Choir. The organist John Blackburn succeeded Rothwell as music supervisor at the Normal School.

J.T. Priest, a school music director 1930-68, organized and led, with violinist Henry Clark, the Civic Orchestra (1945-64), an amateur ensemble made up of school music students and interested community members. Several of the churches used small instrumental groups for regular services as well as special events. Priest and Newman O'Leary composed the annual musicals given at the Stratford Collegiate.

Choirs and Ensembles 1936 to Present

The first Stratford Summer Music festival (1981-4) was founded by Elyakim Taussig to complement the Shakespearean Festival. Concerts by the Hamilton Philharmonic Orchestra, the Orford String Quartet, Theodore Baerg, Liona Boyd, Moe Koffman, Gary Relyea, and Catherine Robbin were held at Stratford's City Hall Auditorium. A Stratford Summer Music Choir (1981-4) was formed under Howard Dyck. In 1982 it separated from the festival and was reformed as the Stratford Concert Choir; it continues to offer regular performances. Subsequent directors have been Ray Daniels, 1984-9 and Ian Saddler. In 2001 a second Stratford Summer Music festival was established by John Miller. Begun as a modest, two-week festival, it expanded to four weeks in 2008. Performances have been given by Chor Leoni Men's Choir, the Duke Ellington Orchestra, l'Orchestre de la Francophone Canadienne, the National Youth Orchestra, the Phil Nimmons Jazz Quartet, the St Lawrence String Quartet, the Vancouver Bach Choir, Measha Brueggergosman, James Ehnes, Ronnie Hawkins, David Jalbert, Jean-Pierre Leguay, and Ashley MacIsaac, among others. R. Murray Schafer was the festival's inaugural composer-in-residence in 2001.

Musicians who were born or who have lived for many years in Stratford and its environs include Cora B. Ahrens; Bailey and John Bird; Martin Boundy; John Boyden; Barbara Collier; Richard Manuel (see The Band); pianist Kathryn Root; Campbell Trowsdale; Ward Allen; teacher William Caven Barron; Lloyd Bradshaw; and Nora Clench (the last three in St. Mary's) and the Celtic harpists Mary Anderson and Loreena McKennitt.