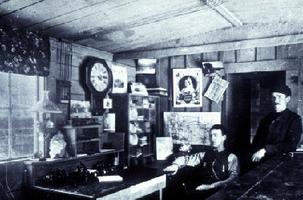 This portable telegraph in the Rocky Mountains could be moved on a railway car from one location to another (courtesy CP Archives).

The telegraph (Gk, tele, meaning "far," and graphein,"to write") was conceived in 1837 in North America by Samuel Morse, and in Europe by the English partnership of William Cooke and Charles Wheatstone. It is a means of electrically transmitting encoded messages through the systematic opening and closing of electric circuits. In Canada, the first telegraph company, the Toronto, Hamilton and Niagara Electro-Magnetic Telegraph Co, was formed in 1846. The largest company in Canada during the early years of the industry, however, was the Montreal Telegraph Co (founded in 1847), controlled by Hugh Allan. It connected such centres as Sackville (New Brunswick), Detroit, Montréal, Ottawa, Buffalo and Portland.

Canadian Pacific Railway Telegraphs commenced commercial telegraph service between Lake Superior and the Rockies in 1885, extended soon to Ontario and thereafter to Atlantic Canada, breaking Western Union's monopoly. Perhaps attributable to this new competition, the Great North Western Telegraph Co faced bankruptcy and was taken over by the telegraph subsidiary of Canadian Northern Railway Co on 1 January 1915. The railway itself was in financial difficulty, however, and was soon purchased by the federal government, subsequently forming a component of Canadian National Railways Co. In this way Great North Western Telegraph Co became Canadian National Telegraph Co.

A major principle of provisioning telecommunications facilities, namely the separation of control of the content of messages from control over transmission, was established in 1910 by the Board of Railway Commissioners for Canada. Almost since the inception of the Canadian telegraph, news gathering had been controlled by the major telegraph companies. In 1894 Canadian Pacific Telegraphs contracted with Associated Press, the major news agency in the US, and itself condensed and selected AP news items for distribution to Canadian newspapers. Canadian telegraph operators for years remained the principal collectors of Canadian news.

In 1907, however, Canadian Pacific Telegraphs attempted to quadruple prices charged for its news service to 3 Winnipeg newspapers which, in opposition, joined to form an independent news service, the Western Associated Press (WAP). Subsequently, Canadian Pacific cut off its news service to the Nelson, BC, News, an action attributable to publication of articles critical of CP. Upon appeal from WAP, the Board of Railway Commissioners in 1910 ruled CP rates to be unlawful and hence the company abandoned the field of news gathering and selection, thereby establishing the principle of the common carrier, that is, accepting for transmission all messages without interference upon payment of lawful rates.

By the 1930s CN and CP railway companies, as the principal providers of telegraph service in Canada, were interchanging traffic on an exclusive basis with US companies - Postal Telegraph Company in the case of CN, and with Western Union in the case of CP. The Canadian telegraph operations continued to compete until 1967, when agreement was reached for reciprocal office abandonment. In this way CNCP Telecommunications emerged first as a joint venture, and then in 1980 as a partnership between the two railways. The partnership was dissolved in 1988, however, when Canadian Pacific acquired CN's interest in CNCP. In 1989 cable TV magnate Ted Rogers acquired 40 percent interest in CNCP Telecommunications, and the company's name was change to Unitel Communcations Inc.

In 1992 the Canadian Radio-Television and Telecommunications Commission issued a decision permitting Unitel and other companies to enter the long-distance voice telephone services market in competition with telephone companies. In thus competing, however, Unitel verged on bankruptcy, whereupon both Rogers and Canadian Pacific sold their shares to the American Telephone and Telegraph Co (AT&T), already a minority shareholder, and to a consortium of Canadian banks.