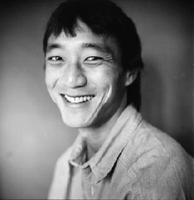 Michibata won a string of national titles before going on to become one of the highest-ranking Canadian tennis players in both single and doubles (photo by Graham Law). 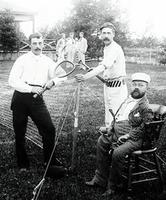 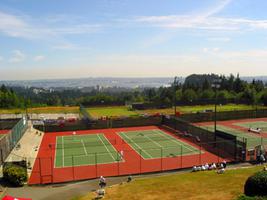 Tennis is a game played on a rectangular court (23.7 m long and 8.2 m wide for singles play, divided into equal halves by a net 0.914 m high at the centre and 1.07 m high at the posts) by two players (or four in doubles) whose objective is to hit a cloth-covered rubber ball with their racquets into their opponent's side of the court so that it cannot be returned. Top-class players demonstrate superb fitness and psychomotor skills; the action may be rapid and heated or fluidly graceful. Matches usually last one to two hours but often continue for longer; one Canadian Davis Cup match was contested for more than six hours. Emotions are intense in such contests and successful players must demonstrate exceptional concentration and mental control.

Modern tennis almost certainly originated in France in the 11th century as a form of handball called le jeu de paume. The game, also called "court tennis" or "real tennis," was played on an indoor court - originally in a monastery - with a ball, and by 1500 a racquet was introduced. The word "tennis" likely derived from the French tenez - "hold" or "take heed," perhaps called before service. The unusual scoring came from the medieval use of 60 as a base number (as we use 100 today), and the term "love" for zero perhaps came from the French l'oeuf ("egg," implying "zero") or from English usage, in which love is the equal of nothing ("love or money"). "Deuce" is a corruption of the French à deux, indicating that one player had to win two consecutive points for the game, and "40" is an abbreviation of the original "45." The use of the word "service" is almost certainly derived from the fact that the ball was set in motion by a servant - initially, with no intention of winning the point, just a way of starting a rally.

Tennis developed as an outdoor game on a lawn in England during the mid-19th century. An early popularizer was Major W.C. Wingfield, who devised a set of rules and a court in the shape of an hourglass, with a net 1.5 m high. Wingfield conducted the first game at a garden party in Wales in 1873. In the next few years, the game was improved as the court was made rectangular and the server was moved to the baseline. When the first Wimbledon championship was held in 1887, the game was basically in the form it is played today.

Tennis began to develop and spread in Canada soon after its popularization in England. J.F. Helmuth formed a club in Toronto that is believed to be the forerunner of the Toronto Lawn Tennis Club (founded 1875). The first Canadian tournament was held at the Montreal Cricket Club in 1878 and the first indoor tournament took place in Ottawa in 1881. The 1880s saw clubs formed in Winnipeg, Man; London, Ottawa, Niagara, and Kingston, Ont; Fredericton and Saint John, NB; Halifax, NS; Victoria and Vancouver, BC; Regina, Sask; Lethbridge and Edmonton, Alta (1891). In 1890 the Canadian Lawn Tennis Association was formed and the first Canadian championships were held in Toronto.

In 2002, Canada's top men's player, Daniel Nestor, was hampered by an elbow injury that kept him out of singles tournaments. But he is considered one of the world's finest doubles players and was ranked number 3 in the world in that discipline, having won the 2002 Australian Open doubles title with his partner Mark Knowles of the Bahamas. The WTA Tour consists of more than 60 events annually in 33 countries, featuring a combined purse of US$51 million. There are five levels of WTA tournaments based on the prize money available. There are nine Tier 1 events, which feature the world's elite players. Each year the WTA Tour culminates with the Championships of the Sanex WTA Tour, with the top 16 in the rankings playing for a share of the US$3 million purse. In mid-2002, the highest ranked Canadians were Jana Nejedly (107th) and Maureen Drake (114th), both of Toronto. The ITF, ATP and WTA tours work together to agree on calendar dates and are also responsible for the successful anti-doping program.

The Davis Cup international team competition for men was first held in 1900; the Federation Cup for women's teams was inaugurated in 1963. Canada entered the worldwide Davis Cup competition for the first time in 1913, losing to the US in the final played at Wimbledon. In the years since, Canada has continued to participate in international competitions with little success until the 2000 Sydney Olympic Games.

Tennis was first introduced to the Olympic Games in 1896. In 1924, because of continual disputes, the sport was withdrawn and didn't return to the Games until 1988. Germany's Steffi Graf, ranked first in the world in 1988, won the gold medal in 1996 when Andre Agassi of the United States took the men's gold. At the 2000 Olympics in Sydney, Australia Yevgeny Kafelnikov of Russia and Venus Williams of the United States claimed gold in singles competition. By far the most exciting story of the 2000 Olympics for Canadian tennis fans was the stunning gold medal upset of the number one seeded Australian doubles team of Mark Woodforde and Tood Woodbridge by Daniel Nestor and Sebastien Lareau.

Nestor has amassed numerous titles and is considered Canada's most successful tennis player. In 2002 he became the second Canadian ever to win a Grand Slam (one of the 4 major tennis tournaments) when he partnered with Mark Knowles to win the Australian Open doubles crown. Nestor and Knowles also won 2 Masters-Series events - the top rung of men's tennis - in 2002. They also won the US Open in 2004 and the French Open in 2007.

Nestor embarked on another successful partnership with Nenad Zimonjić. In July 2008 Nestor became the first Canadian to win at Wimbledon when he and Zimonjić defeated Jonas Björkman (of Sweden) and Kevin Ullyett (of Zimbabwe) in the doubles final. Later that month Nestor and Zimonjić captured the Rogers Cup doubles title, an event Nestor previously won with Lareau in 2000. In April 2009 Nestor reached a historic milestone in Canadian tennis, celebrating his 100th Tour final when he and Zimonjić won the Barcelona Open doubles title. Nestor's 58 career titles are the most of any current player at the ATP world level. In June 2010 he and Zimonjić won their third Grand Slam title together at the men's French Open.

Tennis Canada maintains its commitment to the advancement of tennis in Canada by stimulating participation and excellence in the sport at the local, national and international levels. Tennis Canada is one of the largest and oldest national sport associations in the country. As a full member of the ITF, Tennis Canada operates programs and events for players of all ages and ability levels (including events for people with disabilities). It also operates Canada's international championships as top tier events on both the ATP Tour and the WTA Tour. Tennis Canada is part of Sport Canada and is a member of the Canadian Sports Council and the Canadian Olympic Association. Its membership is made up of the 10 provincial associations, which are partners in developing the game from coast to coast. Its main office is located at the National Tennis Centre at York University in Toronto; it also operates a bureau in Jarry Park Tennis Centre in Montréal.

Recreational Tennis continues to be a popular pastime of many Canadians. According to Tennis Canada, the number of Canadians who play tennis more than four times a year increased from more than 1.2 million in 1998 to nearly 1.7 million in 2001. Of that number, more than 50% are under the age of 25.

Over the last 30 years tennis has been totally transformed. A relatively small amateur sport has become a multi-million dollar industry. In 1968, there were 91 countries affiliated with the International Lawn Tennis Federation (as it was then called) compared with 198 members of the International Tennis Federation in 2002. Tennis is one of the most popular sports throughout the world. There are 3 main bodies involved in world tennis: the ITF, Association of Tennis Professionals (ATP) and the WTA Tour. The ITF, founded in 1913, is the world governing body of tennis and oversees the following five areas of the game: the administering and regulation of tennis, organization of international competitions (including the Davis and Federation cups), structuring tennis by sanctioning international circuits and events, developing the sport through its worldwide development program and promoting the game.

Since 1990, the ATP Tour (a partnership of players and tournaments) has organized the men's professional tour (excluding the four Grand Slam tournaments: the Australian Open in January, the French Open in May, Wimbledon in late June and early July and the US Open in September). The ATP tour consists of nearly 70 one-week, and a handful of two-week, tournaments per year in over 30 countries offering, in 2001, a combined purse of $64.3 million US. The three levels of events are the elite Tennis-Masters Series, the International Series Gold and the International Series. At the end of each year, the eight highest-ranked players are invited to play in the Tennis Masters Cup for a share of the US$3.7 million purse. The ATP also has a year-end doubles championship.