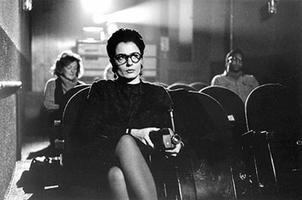 An oblique and elliptical tale that explores “the duality of intimacy and detachment,” The Adjuster (1991) was Atom Egoyan’s fourth feature film and the first to receive widespread international acclaim. It won several high profile awards, including the Best Canadian Feature Film Award from the Toronto International Film Festival (TIFF), and established Egoyan as an original, new voice in international cinema. It was named one of the Top 10 Canadian films of all time in a poll conducted by TIFF in 1993.

The first of Egoyan’s films to be made with a substantial budget ($1.5 million), courtesy of Alliance Films and producer/distributor Robert Lantos, The Adjuster is part absurdist comedy, part tragedy, shot in stunning CinemaScope by Paul Sarossy. It stars Elias Koteas as Noah, an insurance adjuster who attaches himself to fire victims with a frightening devotion that includes not only comfort, but also sex. He is alienated from his wife, Nera (Arsinée Khanjian), a film censor with her own disturbing obsessions. She secretly videotapes the smut she watches, to replay at home for her sister. They live in a model home in a surreal, discontinued suburban development. The film's other major characters are a rich, bored couple (Maury Chaykin and Gabrielle Rose) who enact strange sexual games in public. Their lives overlap when Chaykin's character wants to use Noah's home for a stag movie.

In his incisive analysis of the film, Tom McSorley asserted that The Adjuster expanded upon the thematic concerns Egoyan established in his first three films, namely “the duality of intimacy and detachment… He also pursued further investigations of the idea of the family, the ambiguous role of technology, and the nature and function of both skill and moving images in contemporary experience.” McSorly also argued that the film interrogated “the processes of narrative structure and disclosure and how these processes affect the creation of meaning within the film’s fictional universe, as well as in the spectator’s construction of knowledge during the watching of that universe as it unfolds.”

The Adjuster was generally well received by critics and festival audiences. Roger Ebert called the film “consistently entertaining” and praised “how Egoyan creates this intensely personal universe while at the same time making a movie that is funny and challenging.” Time Out London called it Egoyan’s “richest, most expansive film to date, an engrossing, deadpan tragicomedy,” adding, “Egoyan's characters are always at a remove from the world, emotionally numb, psychically dislocated. He's fascinated by parallax and discrepancy, the gap between image and reality.”

The Adjuster was invited to compete in the prestigious Director's Fortnight program at the Cannes Film Festival, and went on to tour the international festival circuit, winning several high profile awards and establishing Egoyan as an original, new voice in international cinema. Egoyan was nominated for a Best Director Genie Award in 1991, and The Adjuster was named one of the Top 10 Canadian films of all time in a poll conducted by TIFF in 1993. The prize money Egoyan received as part of a Special Jury Prize from the Moscow International Film Festival allowed him to shoot his next feature, Calendar, in Armenia the following year.