The Drowsy Chaperone. Musical, book by Bob Martin and Don McKellar with music and lyrics by Lisa Lambert and Greg Morrison. The Drowsy Chaperone made its debut in 1998 as a unique wedding present for Bob Martin and his bride, Janet Van De Graaff. What followed launched this dreamy, escapist play-within-a-play into Canadian musical theatre history. After a sold-out run at the 1999 Toronto Fringe Festival, the expanded Chaperone opened at The Marquis Theatre on Broadway 1 May 2006. Playing to packed houses for 647 performances, the American production (directed and choreographed by Casey Nicholaw) earned solid accolades from New York critics. In his review of 2 May 2006, Variety's David Rooney wrote, "Via its endearing onstage host, The Drowsy Chaperone extends a warm embrace to every show queen and misfit theatre geek who ever escaped ... into the cocooning fantasy world of a musical." After receiving a record number of nominations, The Drowsy Chaperone won five Tony awards, including the awards for best book of a musical and best original score.

The charm of The Drowsy Chaperone lies in its conceit of a lonely musical theatre devotee dreaming of Broadway. As "the man in a chair" dusts off his favourite old vinyl recordings of forgotten 1920s musicals, his dreary apartment is invaded by a high-kicking, tap-dancing chorus who sing their way through a sentimental story set amid the glittery and familiar trappings of a bygone theatrical age.

Following its stunning success in the United States, The Drowsy Chaperone opened 6 June 2007 at the Novello Theatre in London's West End. Initially scheduled to run until February 2008, the show closed 4 August 2007. However, as Kamal Al-Solaylee of the Globe and Mail noted 6 August 2007, this cooler British response was but a "bump in the amazing journey of The Drowsy Chaperone." The Drowsy Chaperone made a triumphant return to Toronto's Elgin Theatre 19 September 2007, the first stop of an international tour. In 2008, it received a Dora Mavor Moore Award for outstanding touring production. 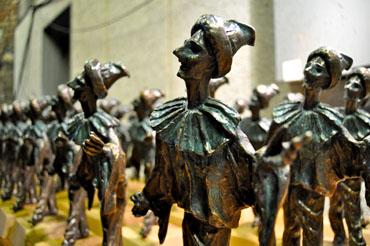