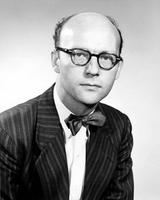 Harry Thomas (Tom) Patterson, founder of the STRATFORD FESTIVAL of Canada (b at Stratford, Ont 11 June 1920; d at Toronto 23 Feb 2005). Tom Patterson served in Europe during World War II, then studied at the University of Toronto's Trinity College, graduating with a bachelor of arts degree in 1948. He then became a trade-magazine journalist with the Maclean-Hunter publishing company. In 1951, he began soliciting support for his idea "conceived while he was in high school" of starting a Shakespeare festival to fill the economic void left by Stratford's declining railway industry.

After an abortive first attempt to enlist Laurence Olivier as an artistic advisor, Patterson succeeded in arousing the interest of Tyrone GUTHRIE, who agreed to come to Canada to serve as the festival's first artistic director. Guthrie's longtime collaborator Tanya MOISEIWITSCH designed an innovative thrust stage, to be housed in a canvas tent, and Alec Guinness was recruited as the inaugural season's star. Patterson himself assumed the role of general manager.

Despite a series of monetary crises that threatened to close the venture down before it had begun, the festival presented its first performance on the night of 13 July 1953, with Guinness as Richard III. The second production, All's Well That Ends Well, opened the following night. The inaugural season was extended from four weeks to six, and the Stratford Festival has since grown into the largest classical repertory theatre in North America.

Though he remained actively involved with the festival in various capacities until the early 1970s, Patterson realized as soon as the first season was over that he was ill-suited to the role of general manager, and immediately began pursuing other ideas. In 1954, he and actor Douglas Campbell founded the Canadian Players, taking productions of Shakespeare and other classics on tour throughout Canada. In 1956, he became founding director of the Canadian Theatre Centre and later a member of the National Theatre School's founding committee and chairman of its board of governors. He organized the Dawson City Gold Rush Festival in 1962, and in 1963 co-authored a federal government report on the arts that was commissioned in anticipation of Canada's centennial celebrations. He also consulted to other theatre companies and arts festivals across North America and worked in the film industry.

Patterson became a member of the ORDER OF CANADA in 1967 and was promoted to officer in 1977. He held honorary doctorates from the University of Toronto and the University of Western Ontario, and was a recipient of the Canadian Centennial Medal, the Queen Elizabeth Silver Jubilee Medal and the Order of Ontario. In 1978 the City of Stratford dedicated Tom Patterson Island in the Avon River, and in 1991 the Stratford Festival renamed its Third Stage as the Tom Patterson Theatre.

Though unmatched in significance by any of his subsequent ventures, Patterson's founding of the Stratford Festival helped establish a professional theatre tradition in Canada and gave the country one of its most successful cultural institutions.