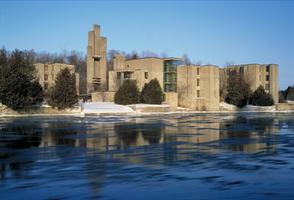 Trent University is located in Peterborough, Ont. Although the university was established by statute in April 1963, it opened its doors to its first students in the 1964-65 academic year. They were accommodated in 2 downtown Peterborough locations: Peter Robinson College for men and Catharine Parr Traill College for women. Both colleges are now coeducational. The university's first administrative centre, now no longer in use, was a renovated normal school called Rubidge Hall. These downtown locations were renovated by the university's master-planning architect, Ron Thom, who also designed the first permanent buildings on the university's main campus: Champlain College (1966), the Thomas J. Bata Library (1968) and Lady Eaton College (1968). All were award-winning designs.

Trent embodies the academic objectives of its founding president, Professor Thomas H.B. Symons. The 6 residential colleges provide excellent small-group teaching in the traditional arts and science disciplines and in a number of interdisciplinary programs, including administrative and policy studies, Canadian studies, computer science, cultural studies, environmental and resource studies, comparative development studies and native studies. In keeping with this philosophy, Trent limits enrolment and three quarters of its classes have fewer than 25 students. Teacher education is carried out in co-operation with Queen's University. Graduate programs in specialized areas include anthropology, applications of modelling in the natural and social sciences, methodologies for the study of western history and culture, Canadian heritage and development studies and watershed ecosystems. Trent is the first university in Canada to offer a PhD in native studies. The university also provides a home for the Journal of Canadian Studies, which has been published there since 1966.

Trent's motto is "Nunc cognosco ex parte" ("Now I know in part") and its colours are dark green and white. Trent has approximately 4000 undergraduates in the full-time program and almost 1300 part-time students.