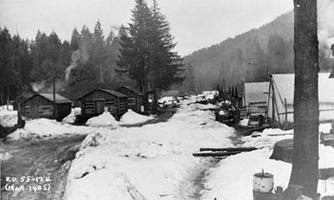 In October 1932, at the end of the third year of the Great Depression, Prime Minister R.B. Bennett sanctioned the creation of a nationwide system of camps to house and provide work for single, unemployed, homeless Canadian males. The camps were established on the recommendation of chief of the general staff Maj-Gen A.G.L. McNaughton and were placed under the Department of National Defence in consultation with the Department of Labour. They were staffed with civilians.

Men voluntarily entered the camps through the Employment Service of Canada; they were free to leave at any time. In return for bunkhouse residence, three daily meals, work clothes, medical care and 20 cents a day, the "Royal Twenty Centers," as the occupants were called, laboured at 44-hour work weeks clearing bush, building roads, planting trees and constructing public buildings.

The camps were controversial. Critics attacked the federal government for choosing to establish the camps instead of creating a program of reasonable work and wages. The most dramatic demonstration of this resentment occurred in April 1935, when 1,500 men from various British Columbia camps went on strike, demanding improved living conditions in the camps as a temporary measure, and also new work programs from Ottawa. After two months' of public protest and agitation in Vancouver, the strikers then set forth on the On To Ottawa Trek, to bring their demands to Parliament. The strikers failed to convince Bennett's government to change its camps policy, and they eventually retreated to Regina, where their protest ended in violence during the Regina Riot of 1 July.