The Victoria Cross, instituted 1856 by Queen Victoria, is the Commonwealth's premier military decoration for gallantry. It is awarded in recognition of the most exceptional bravery displayed in the presence of the enemy.

Private Michael J. O`Rourke,7th Canadian Infantry Battalion, was awarded the Victoria Cross while serving as a stretcher-bearer during the fighting for Hill 70 in 1917. He had been already received the Military Medal for heroism during the Battle of the Somme in 1916. Here he is wearing the ribbons for both medals. 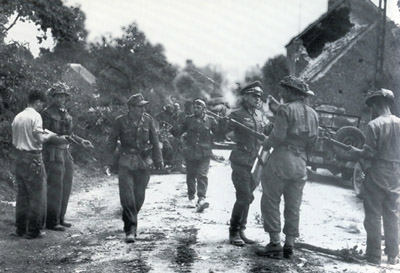 Major David Currie (second from right, pistol in hand) oversees the surrender of German soldiers in Saint Lambert-sur-Dives, 19 August 1944. Currie was awarded the Victoria Cross for his actions that day. 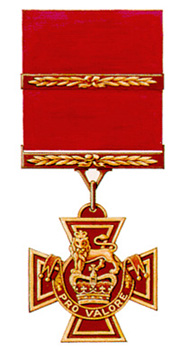 The awarding of the original Victoria Cross was suspended in Canada in 1972, but on 2 February 1993 Queen Elizabeth II approved the creation of a Canadian VC. In design it resembles the original except for the Latin inscription.
PreviousNext

The first recipients of the Victoria Cross (VC) saw action in the Crimean War. Among them was a Canadian lieutenant, Alexander Roberts Dunn, who was awarded the VC for heroism during the charge of the Light Brigade at the Battle of Balaclava. Another early recipient was William Hall, who in 1859 became the first Black and the first Canadian naval recipient of the Victoria Cross.

Over the years, there have been 99 Canadian recipients (living and posthumous) of the Victoria Cross. This includes Canadians who were attached to the forces of other Commonwealth countries and some non-Canadians serving in Canadian units. The decoration is in the form of a bronze cross patée bearing the royal crest and the words "For Valour." The ribbon is dark crimson.

The awarding of the medal was dropped in 1972 when the Canadian Decorations for Bravery were created (Cross of Valour, Star of Courage, Medal of Bravery). However, in April 1987, Brian Mulroney's Conservative government asked the deputy director of the Chancellory of Canadian Orders and Decorations to consider its reinstatement.

In 1993, Queen Elizabeth II approved the creation of a Canadian VC. The award has the same criteria as the original British decoration. The Canadian VC resembles the original VC except that the Latin inscription Pro Valore replaces the equivalent English inscription "For Valour." No Canadian VCs have yet been awarded.