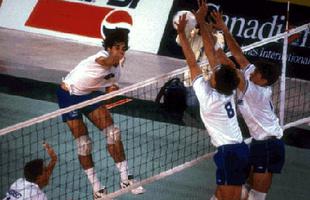 Volleyball is a team sport played by 6 players on a side. A new rule allows the use of a "libero" player who may enter the game at any time when play is stopped and as many times as needed. However, this is only for a back row player (after service) and is not counted as one of the 6 substitutions. The player's role is to improve the defensive actions within the game and he or she is not allowed to set or attack the ball in the 3 m area. These players wear a distinctive uniform (different from their own team) to indicate that they are the free substitution player.

The playing court, 18 m x 9 m, is divided by a centreline. Above the centreline is an extended net, placed 2.43 m high for men and 2.24 m high for women. The goal of the game is to send the ball, according to the regulations, over the net to the floor on the opposite court. Service, initiated by the right back player, puts the ball into play. Each team is entitled to contact the ball 3 times (in addition to the touch on the block) to prevent the ball from touching the floor of its own court. Players, except blockers, are not allowed to contact the ball twice consecutively, unless the contacts are part of one action and the ball does not come to rest. The ball remains in play until it touches the floor, walls, ceiling and any other object or until a player commits a fault.

Points are now scored after every rally and the side-out is no longer part of the system. The team that scores at least 25 points or more, with an advantage of 2 points over its opponent, wins a set (game). The team that wins first 3 sets (games) wins the match (best of 5 sets). However, the fifth set is only played to 15 points with the winner also needing an advantage of 2 points to be declared victorious.

Volleyball was developed in the US in the last decade of the 19th century. As the game developed from being recreational to being a highly competitive sport, skills grew more sophisticated and intricate tactics of attack and defence evolved. Volleyball is played competitively around the world by over 150 countries holding membership in the International Volleyball Federation. World Championships are held regularly for male and female athletes at the senior, junior and youth levels. Volleyball has been an Olympic sport since 1964.

Volleyball was introduced to Canada in 1900 through the YMCA, and informal competitions began shortly after. Volleyball Canada was formed in 1953. Championship tournaments were launched in eastern Canada and then nationally. Toronto Central YMCA's Estonians were men's champions (1953-59); Montreal International YMCA's Latvians were the first women's champions (1953).

In international competition, Canadian teams qualified for the 1976 (men and women), 1984 (men and women), 1992 (men) and 1996 (women) Olympic Games. The Canadian men's team scored impressive wins over the world-leading Soviet team in 1984 and later finished 4th at the 1984 Los Angeles Olympics. In 1992 the Canadian men finished 10th and in 1996 the Canadian women beat Peru to finish 9-12. The World Volleyball League was created in 1991 for male national teams from around the world. Using this as an opportunity to improve, the Canadian men's team has taken part twice, finishing 7th in 1999, their highest finish to date. Canada hosted the 1976 Olympic Volleyball Championships in Montréal and the World Junior Championships in Saskatoon and Edmonton (1999).