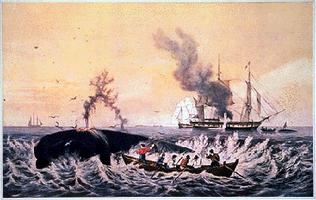 A harpooner about to strike a giant whale, which would eventually bleed to death (courtesy Library and Archives Canada/C-32708).

About 33 species occur in Canadian waters, of which about 13 have been commercially significant. The earliest exploited were the relatively easily hunted right, bowhead and grey whales. As the numbers of these species declined, humpback and sperm whales became the preferred prey. Later still, when technological advances made it feasible, the very fast blue, fin and sei whales were taken. The first whalers in Canada were native people, the Nootka of Vancouver Island who hunted for subsistence. As early as the 16th century, Basque seamen from France and Spain sailed to the Gulf of Saint Lawrence, where large numbers of whales congregated each summer to feed.

In the 18th century, British and American ships cruised the Atlantic seaboard. In the 19th century, Canadians entered the field, establishing a whaling station in Newfoundland, and taking whales as part of a deep-sea fishery operation from Gaspé. Norwegian whalers entered the area toward the end of the century, establishing stations in Newfoundland, Labrador and the Gulf of St Lawrence. Beginning in the 1830s American whalers cruising north to the Bering Sea hunted whales migrating along the Pacific coast. A local Canadian industry was established for a brief period (1868-72) at harbours on Vancouver Island and in the Gulf of Georgia. From 1905 at least one company operated at any given time (excluding the period 1942-47) until 1967 when the last Canadian West Coast whaling company (the Western Canada Whaling Co) ceased whaling.

Whaling began in the Davis Strait region of the Arctic in the 17th century. Dutch, German, English and Scottish whalers largely confined their efforts to the eastern (Greenland) side until the expeditions of John Ross (1818) and W. Edward Parry (1819) crossed Baffin Bay and showed the way to Lancaster Sound. The northernmost extent of whaling was Ellesmere Island. The most important area for autumn whaling was Cumberland Sound. The peak of whaling activity was from 1820 to 1840, when there were sometimes almost 100 vessels in the Davis Strait area; in some years the catch exceeded 1000 whales.

Ordinarily, arctic whaling voyages lasted a single summer; ships arrived in Davis Strait in April and tried to begin the return journey by October. However, on many occasions vessels were trapped by ice and either imprisoned through the winter or sunk. While British whalers dominated the Davis Strait grounds, US ships opened the northwest corner of Hudson Bay (1860) and after 1889 pushed past Point Barrow in the Beaufort Sea. By the late 1890s vessels had penetrated Amundsen Gulf. Compared to the eastern Arctic, whaling in the Beaufort Sea was of short duration (1889-c1914). These areas were so inaccessible that whalers extended their visits over a year, spending the winter months frozen in sheltered harbours to get an early start in spring. The population of whalers was not large: at most, 500 seamen wintered in the Beaufort Sea and 200 in Hudson Bay. Wintering did not begin on Baffin Island until the 1850s and it was not until later in the century that permanent shore stations, such as Kekerton and Blacklead Island on Cumberland Sound, were established.

However, the impact of the whalers on the Inuit was profound. Natives were employed as pilots, hunters, dog drivers and seamstresses, and were eager to procure European trade goods. Liquor was imported and violence increased. Contact between whalers and Inuit at shore stations inevitably resulted in the spread of alien diseases. Epidemics of measles, typhus and scarlet fever swept through the native populations. At the beginning of the 20th century an entire people, the Sadlermiut of Southampton Island in Hudson Bay, were wiped out. The influx of whalers placed a great strain on arctic resources. Caribou herds were decimated to provide meat for the ships' crews. As supplies of meat and leather dwindled, and as tastes changed, many Inuit came to rely on food and clothing traded from the whalers. Some native people were employed on the ships as hunters or crewmen and increasingly the economic life of the Inuit was changed.

The activities of foreign whalers in the Arctic stimulated the Canadian government to assert sovereignty over the Arctic Archipelago. Officially, these islands had belonged to Canada since 1880, but no presence had been established and foreign whalers continued to operate in the Arctic without any regulation. By 1900 suspicions were growing that the US planned to annex the area, using the activities of American whalers as a pretext. Detachments of North-West Mounted Police were established (1903) to collect customs, regulate the liquor traffic, impose whaling licences and maintain order.

Whales have been valued for different products at different times. The Inuit used all of the whale: skin, blubber, flesh and internal organs were eaten; baleen and bones were used for buildings, furniture and innumerable smaller items; oil provided heat and light. Europeans were more wasteful. Initially, oil extracted from blubber was used in street lamps and for soap. By the late 19th century, coal gas and petroleum products replaced animal oil as an illuminant, but it continued to be used in margarine, paints and varnishes, and as a lubricant. The waxy spermaceti produced by sperm whales was used for candles, lubricants, cosmetics and shoe polish.

In Canadian waters, the most important whale was the bowhead, which supplied baleen (whalebone), a substance which hangs in long, curtainlike strips from the roof of its mouth. A large bowhead might produce over 700 strips. By the end of the 19th century, it became common practice to remove baleen and discard the carcass. This flexible substance was used for a range of products including buggy whips, skirt hoops, umbrellas, carriage wheels, corset stays and fishing rods. It was replaced in the 20th century by spring steel and plastics. Whale meat has been used for human consumption, chiefly in Japan and Norway, and for animal food.

At first commercial whalers armed with hand-held harpoons and lances pursued the animals in small boats. The harpoon was thrust into the whale and the animal was allowed to run out line. "Nantucket sleigh rides" occurred when all the line had run out and the whale was "tethered" to the boat. When the whale was exhausted, the whalers moved in for the kill. New weapons were introduced in the middle of the 19th century. The shoulder gun fired an explosive missile with a time fuse which detonated inside the animal. The harpoon gun, a cannonlike weapon mounted at the bow of the boat, fired a barbed harpoon with an explosive charge attached. Such weapons transformed the hunt from a contest to a slaughter.

The steam engine was first applied to whaling ships in the 1850s. By 1870, most of the Davis Strait fleet had converted to steam and American whalers in the Beaufort Sea quickly followed suit. The increased speed, power and maneuverability allowed whalers to carry the hunt farther from home ports and reduced dangers of ice and storm.

In the Canadian Arctic, commercial whaling had all but ceased by the outbreak of WWI. Whale stocks were depleted to the point of extinction and the demand for baleen had decreased. Along the BC coast, however, and in Newfoundland and Nova Scotia, whaling continued from several land-based stations with catcher boats pursuing and killing whales and towing the carcasses to land for processing. Whaling entered a new phase internationally in 1925 with the introduction of factory ships. Annual catches rose dramatically: in the late 1930s more than 50 000 whales were taken annually. After formation of the International Whaling Commission (IWC) in 1946, the killing of several species was banned completely and quotas were established to control exploitation of the rest. In 1972, the federal government ordered a halt to all whaling operations based in Canadian ports. The last West Coast company had stopped whaling in 1967; thus the government order affected only 2 shore-based operations in Newfoundland and one in Nova Scotia. The Inuit are still allowed to take whales. As a result of conservation measures, some whale stocks have shown signs of recovery. In the 1930s, the bowhead was thought to be on the brink of extinction and was declared an endangered animal. Recent studies indicate that it has survived and may be recovering slowly in some areas.

Canada was a member of the IWC but withdrew from the organization in 1982. The commission had achieved some significant success; however, because member nations are not bound to conform to its recommendations, the commission can be only as effective as the whaling nations allow. Decisions have often been tempered by the desire to keep nations in the organization, where some control is possible, rather than outside, where their activities would be totally unregulated. Canada disagreed with efforts in 1980 to declare a moratorium on commercial whaling because in the absence of a clear and scientifically justified recommendation for such action from the commission's scientific committee, it felt that conservation requirements could be met under the commission's management procedure which provides for selective moratoria (zero quotas). Canada's position on the moratorium issue earned a great deal of criticism from anti-whaling groups. Nevertheless, a moratorium announced in 1982 took effect 1 January 1986. Although no longer a member of the IWC, Canada continues to ban commercial whaling in its territory and continues to co-operate with the commission's scientific committee.