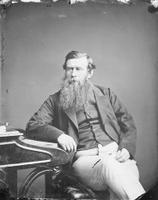 William Henry Pope, politician, journalist, lawyer, judge, land agent (born 29 May 1825 in Bedeque, PE; died 7 October 1879 in St. Eleanors, PE). William Henry Pope was a dominant Conservative strategist who attended the Charlottetown and Québec Conferences and became one of the most committed pro-Confederation politicians in Prince Edward Island. Pope influenced Island politics from beyond the official political sphere as a journalist and behind-the-scenes adviser. He was also an eminent judge in Prince Edward Island.

William Henry Pope was the elder son of Joseph Pope, who had emigrated from the English West Country as a teenager in 1819. Joseph became involved in the timber trade and shipbuilding, and also served as a land agent. In addition, he was a leading Conservative politician in the 1830s and 1840s.

William was educated first on Prince Edward Island and then in England, where he studied law in London in the Inner Temple before returning home. He was admitted to the Bar in 1847, and he soon became land agent for such clients as the elderly Charles Worrell, who had retired to England. As such, William gained an unenviable reputation. After William’s father-in-law falsely advised Worrell that the Liberal government — which had passed a land purchase act — would not buy his property, William and his financial partners (including his father-in-law) bought it themselves for £14,000. They promptly resold the land for £24,100 to the government — an embezzlement without parallel in the colony and one that became legendary.

William Henry Pope did not seek elected office in the 1850s but became increasingly active behind the scenes within the Conservative Party. When the Tories took office in 1859, they appointed him colonial secretary. In the same year, he became editor of the Islander, the most important Conservative newspaper in the colony. His main journalistic antagonist, the Liberal Edward Whelan, had already written that “Mr. Pope is a man whom the Tories rather fear than respect [...] he has more cunning, more perseverance in the pursuit of his object (no matter what it is) and more real talent than any other man of his party.” Whelan’s words were prophetic, as for several years Pope was to be the dominant Conservative strategist.

In the early 1860s, Pope became involved in a series of increasingly harsh verbal exchanges with Roman Catholic writers on such subjects as the temporal powers of the papacy. Born a Methodist but widely known to be an “infidel” (the contemporary Island term for a freethinker), it is improbable that he shared all the sentiments he stirred up. But the Conservatives, after coming to office by politically mobilizing the Protestant majority against the Catholics, had tried and failed to reconcile with the local Catholic bishop. As a consequence, Pope provided journalistic leadership for the Conservatives, who then won the most bitterly sectarian election in Island history in 1863. He also successfully contested a strongly Protestant constituency.

Thus the reputation Pope had earned prior to the emergence of the Confederation question was that of an unscrupulous, win-at-all-costs political operative.

William Henry Pope enthusiastically welcomed the project for union of the colonies. He believed that Confederation was inevitable and that it would give Islanders greater weight in dealing with the leasehold system (see PEI Land Question). He attended the Charlottetown and Québec Conferences, but had to face the fact that Confederation was deeply unpopular locally. After delegates returned from Québec, Pope became involved in acrimonious conflict within his party over the issue. Such discord resulted in the formation of a new Conservative government in January 1865, led by his younger brother James Colledge Pope, whose position on Confederation was ambiguous. William resigned as executive councillor and colonial secretary in 1866, and never again stood for elective office.

William remained editor of the Islander, with two aims in mind: Confederation for the Island (the end) and reconstruction of the Conservative Party with a strong confederate presence (the means). His strategy was to promote discord within the Liberals, who won the general election of 1867 but who had leadership problems of their own and were divided on the land and school questions. William exploited the latter by advocating limited financial support to Catholic educational institutions and pressing Catholics to “force” their case.

In 1870, the Liberals split over the school question with all Catholic legislators except one joining a second James Colledge Pope government, which made the building of a railway its policy. The project — for which William had advocated for years — proved far too expensive for the Island’s treasury, and on 1 July 1873 the Island entered the Dominion of Canada.

In 1873, William Henry Pope was appointed Prince County Court judge, a position newly created by the third government led by James Colledge Pope. He was an exceptionally able jurist, rendering several thousand judgements, of which only two were appealed; the Island’s Supreme Court upheld both. This sterling performance underlines the ability of William, who was a man of broad connections and interests. Before his death he had begun research in England for a projected history of the Island; and in London he was elected three times to the ranks of the Athenaeum Club, as one of its 15 honorary non-British members.

William Henry Pope’s legacy, aside from his work as a judge, centres on his relentless commitment to the Confederation movement, aspects of which reveal a ruthless and slippery side to his character. In 1870, eight days after his brother became premier for a second time, he wrote a “private and confidential” letter to Prime Minister Sir John A. Macdonald. The time had come for the Colonial Office to “put on the screws,” William wrote, and Islanders must be warned that if they did not negotiate terms London would impose terms. But this was to be done without Ottawa communicating with any members of the Island government, he emphasized. It was an example of how Pope tended to operate in the shadows.