The company's publicity has claimed 1840 as the founding date, but the claim cannot be supported. It is certain, however, that Abraham Nordheimer opened a music store in Kingston in the fall of 1842 and moved to Toronto in 1844 to establish the A. & S. Nordheimer Co at a King St East location with his younger brother Samuel. (The store moved to Yonge St in 1915.) Abraham remained the senior partner until his death in 1862; Samuel was president 1862-1912 and Albert (Abraham's son) 1912-27, having served previously as managing director.

Branches were opened in Hamilton, London, Ottawa, St Catharines, Montreal, Quebec City, and Winnipeg, but most were short-lived and local firms took over as agents. Only the Montreal branch was active over a long period - ca 1848-67 and again ca 1880-1911.

Nordheimer began to publish sheet music after the move to Toronto, and its output soon surpassed that of all other Canadian firms. When the company joined the Board of Music Trade of the USA in 1859 it satisfied the condition of membership - that of having published at least 1000 pages of music. In 1870 it had 272 titles in print. The pre-Confederation output included Canadian and foreign composers in about equal numbers. Among the former were J.P. Clarke, St George B. Crozier, Jules Hecht, Henry Schallehn, and G.W. Strathy; among the latter, Balfe, Bellini, and the young Offenbach. Also offered was a piece misattributed to Beethoven. Most publications were for piano or voice and piano, but Clarke's Lays of the Maple Leaf, a song cycle or glee (and the longest Canadian publication in sheet music size up to its time, 1853), contained duets and a choral piece. Publication series included The Band, 'a selection of fashionable dances for the piano.'

Plate numbers were used until the early 1850s (reaching about 100) and again after 1890 (beginning where they had left off, and reaching 386 by 1918). The engravers included Ellis of Toronto and Wakelam and Birch of New York. The engraving and paper were of a high quality; cover illustrations were rarely used and copyright registrations were undertaken in the USA. The first copyright known to have been registered by Nordheimer in Canada was Martin Lazare's 'Canadian National Air' of 1859.

Among those who gained experience with the firm before setting out on their own were Paul Hahn, Thomas G. Mason and Vincent M. Risch (Mason & Risch), and George E. Suckling. The senior staff included A.H.S. Van Koughnet, factory manager; W.W. Wakelam, sheet music department manager; and Walter Duffett, secretary treasurer.

In addition to carrying on their commerce, the Nordheimers invited foreign artists to perform in Canada and opened a concert hall in Montreal, 'the handsomest concert hall in Canada' (Horton Rhys, A Theatrical Trip, London 1861). Emma Lajeunesse (Albani) sang there in 1861. A recital hall and studio facilities were later established on Scott St in Toronto.

After Albert Nordheimer's retirement at the end of 1927, Heintzman &Co took over the business in January 1928, including the factory in the Junction district of Toronto. Heintzman kept the Nordheimer name for certain styles of pianos until 1960 (discontinuing production at 27,846), thus making it the oldest brand name in use in Canadian music. Heintzman continued to use the Nordheimer name on casings for approximately another 10 years. 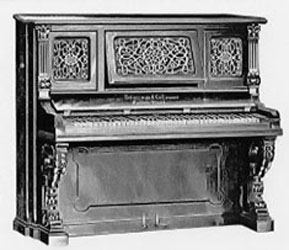