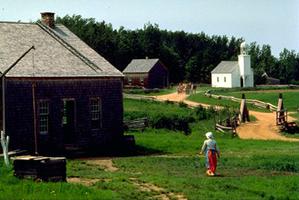 First opened in 1977, the Acadian Historical Village (Village historique acadien) is an ambitious living history site located on the Rivière-du-Nord near Caraquet, NB, in the heart of the Acadian Peninsula. It presents the rich tangible and intangible cultural heritage of the large Acadian population who settled in New Brunswick.

The site includes over 40 restored or reconstructed 18th-, 19th-, and 20th-century buildings from various Acadian communities around New Brunswick. Interpreters in period costumes introduce visitors to the way of life and distinctive culture of Acadia between 1770 and 1949.

The site is laid out to replicate a small rural settlement and includes several farmsteads, a grist mill, a tavern, a general store, a school and a pioneer chapel among other buildings. The Village is noted for its special events which often involve demonstrations of traditional skills like horse shoeing, soap making or haying.

In 2001, a new area of the Village was opened to the public. It showcases 20th century buildings, including a faithful replica of Château Albert, a resort hotel originally located in Caraquet. It offers dinning and accommodation.

The Village is open to the public daily from June to the beginning of September and then on a limited basis until early October.