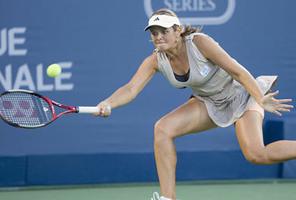 Wozniak exhibited an interest in tennis as early as age three, wanting to follow in the footsteps of her older sister Dorata, who played competitively in the 1990s. Coached by her father, Antoni, young Aleksandra soon rose to the top of the sport at the junior level, and in 2005 was ranked third.

Aleksandra Wozniak's meteoric rise assured her direct entry into all four Grand Slam tournaments in 2007. Also in 2007, she reached her first career World Tennis Association (WTA) Tour final at Fes, Morocco. In 2008, she captured the Bank of the West Classic at Stanford, California, becoming the first Canadian woman to win a WTA world singles title since Jill Hetherington-Hultquist in 1988, and the first woman from Québec to achieve the honour. Her highest ranking is 21st in the world, achieved in June 2009.