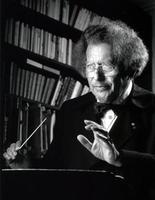 Brott possessed a mastery of form and structure along with the techniques of composition, a remarkable aptitude for work, and considerable effectiveness in his vocal and instrumental writing (public domain). 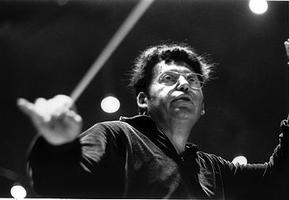 Alexander Brott, conductor, composer, violinist, educator (b at Montréal 14 Mar 1915; d at Montréal 1 April 2005). Early success as a violinist with training at the McGill Conservatorium and the Juilliard School led to a teaching appointment at McGill University in 1939, where he founded the McGill Chamber Orchestra. Having retired from McGill in 1980, Alexander Brott continued to be conductor of the orchestra, with his son Boris as co-conductor in 1989. He continued thereafter to conduct one concert on each program until the end of 2004, at which point the conducting duties were passed to Boris. Concertmaster (1945-58) and at various times assistant conductor (1948-61) of the Orchestre Symphonique De Montréal, he was artistic director of the Kingston Symphony from 1965 to 1981 and guest-conducted most major Canadian orchestras. He created the Montreal "Pops" Concerts series, and in 1986 founded the training orchestra Les Jeunes Virtuoses de Montréal.

On frequent conducting tours abroad, Brott was an enthusiastic champion of the music of Canadian composers. His own output as composer for a variety of instrumental and vocal media is large with more than 100 compositions. A skilful craftsman with a sure mastery of form, he used counterpoint as his primary construction technique. Much of Brott's music is distinguished by good humour, elegant wit and satire. He received many awards for his compositions and was honoured with three doctorates (Chicago, Montréal, Queen's) among other distinctions. He was made a Member of the Order of Canada in 1979, Chevalier de l'Ordre nationale du Québec in 1987, a Knight of the National Order of Quebec in 1988 and received the Association of Canadian Orchestras Award in 1990, the Canada 125 Medal, and the Queen's Jubilee Medal.