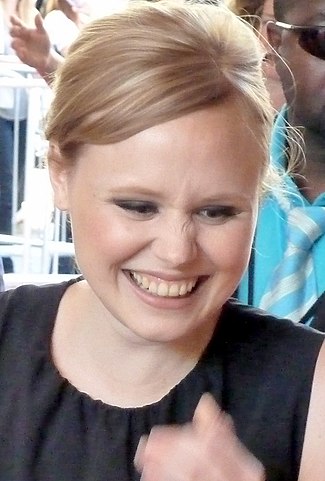 Alison Pill at the premiere of Goon at the Toronto International Film Festival in September 2011.

Pill grew up in Toronto’s Annex neighbourhood and took an interest in performing at an early age. She began acting as an extra in the television series, Kung Fu: The Legend Continues (1993), which allowed her to secure an agent. She decided she wanted to be an actor at age 10 and was accepted into the Claude Watson School for the Arts in North York. She also joined the Toronto Children’s Chorus and was chosen to narrate one of the performances, which led to work narrating children’s audio books.

By the age of 11, she was appearing in commercials and on Canadian television series such as The New Ghostwriter Mysteries (1997), Fast Track (1998), PSI Factor: Chronicles of the Paranormal (1998), Poltergeist: The Legacy (1999) and Traders (2000). She made her feature film debut in Jerry Ciccoritti’s The Life Before This (1999) and had a supporting role opposite Mark McKinney and Maury Chaykin in the film adaptation of Mordecai Richler’s Jacob Two Two and the Hooded Fang (1999).

To better balance her education with the demands of her acting career, Pill attended Vaughn Road Academy’s Interact program, designed to accommodate students with outside commitments in the arts and athletics.

Alison Pill appeared opposite Jennifer Jason Leigh and Drew Barrymore in Skipped Parts (2000) and continued to perform in television series and TV movies, including the Emmy Award-winning Life with Judy Garland: Me and My Shadows (2001), with Judy Davis and Victor Garber. She played best friend to Rachel McAdams in the Canadian film Perfect Pie (2002) and appeared alongside Katie Holmes and Patricia Clarkson in the indie-comedy Pieces of April (2003). She starred opposite Lindsay Lohan in Confessions of a Teenage Drama Queen (2004) — reportedly securing the androgynous role by sending the director pictures of herself dressed as a boy — and played a gun-toting pacifist in Thomas Vinterberg’s Dear Wendy (2004).

After graduating from high school, Pill applied to Oxford but was not accepted. She moved to New York and made her Off-Broadway debut in Neil LaBute’s The Distance From Here (2004). She then received a Tony Award nomination for Best Featured Actress in a Play for the Broadway production of Martin McDonagh’s The Lieutenant of Inishmore (2006). She also appeared in productions of Blackbird (2007), Mauritis (2007), LaBute’s reasons to be pretty (2008), This Wide Night (2010) opposite Edie Falco, and the Broadway revival of The Miracle Worker (2010) playing Annie Sullivan to Abigail Breslin’s Helen Keller.

Pill made a smooth transition into adult roles in film and television, appearing on such established American television series as Law & Order: Criminal Intent (2006) and CSI: Crime Scene Investigation (2008), as well as the short-lived NBC drama series The Book of Daniel (2006). Gus Van Sant cast her as Harvey Milk’s campaign manager in the Academy Award-winning biopic Milk (2008). She starred opposite Gabriel Byrne in a season of the HBO drama In Treatment (2009) and played Empress Maude in the TV adaptation of Ken Follett’s epic novel The Pillars of the Earth (2010).

She learned the drums from Sloan’s Chris Murphy to play sarcastic drummer Kim Pine in the Toronto-set cult favourite Scott Pilgrim vs. the World (2010) and played a lustful love interest in the hit Canadian hockey film Goon (2011). She performed in Woody Allen’s Midnight in Paris (2011) and To Rome with Love (2012) and landed a co-starring role as an idealistic but troubled journalist in Aaron Sorkin’s award-winning HBO drama The Newsroom (2012–14). She played the lead in a Los Angeles production of Wait Until Dark (2013) and appeared in the action-thrillers Snowpiercer (2013) and Cooties (2014).


She co-starred with Don McKellar and Jason Priestley as a comic book creator in the meta drama Zoom (2015), played a dutiful 1950s housewife to a Hollywood studio mogul in the Coen brothers’ Hail, Caesar! (2016) and was the assistant to Jessica Chastain’s titular lobbyist in the political thriller Miss Sloane (2016). Pill landed a supporting role opposite Joan Allen in the short-lived ABC drama The Family (2017) and played a deceitful cult member terrorizing a Michigan community on the eve of the 2016 US presidential election in American Horror Story: Cult (2017). She then reprised her role as the love interest in the sequel Goon: Last of the Enforcers (2017) and played Mary Cheney opposite Christian Bale and Amy Adams in the Oscar-nominated Dick Cheney biopic Vice (2018).

In 2018, Pill was cast as a quantum physicist working for a secretive tech company in Alex Garland’s limited sci-fi series Devs (2019). In April 2019, CBS TV Studios announced that Pill had been cast opposite Patrick Stewart in an upcoming Star Trek series focussing on the later life of Captain Jean-Luc Picard.

Pill’s personal life has been relatively tabloid free. However, she made headlines in September 2012 when she accidentally tweeted a topless photo of herself. She was engaged to Canadian actor Jay Baruchel, co-writer, producer and co-star of Goon, from December 2010 to March 2013. She married actor Joshua Leonard (The Blair Witch Project, Togetherness) on 23 March 2015 and gave birth to their daughter, Wilder Grace Leonard, on 19 November 2016.