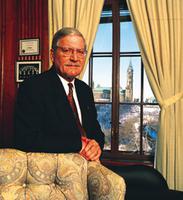 Antonio Lamer, lawyer, chief justice of Canada (b at Montréal 8 July 1933; d at Ottawa 24 Nov 2007). After graduating from the Collège St Laurent at Montréal and Université de Montréal (LL.L 1956), Lamer read law with the Montréal firm of Cutler, Lamer, Bellemare & Associates. Called to the Québec bar in 1957 he then joined the firm, where he practised until 1969, rising to become senior partner. He also lectured for many years in the Faculty of Law and School of Criminology at U de Montréal. In 1969 he was elevated to the bench as justice of the Québec Superior Court and Queen's Bench, where he sat until appointed to the Quebec Court of Appeal in 1978.

In 1980 he was appointed a justice of the Supreme Court of Canada, and on 3 July 1990 became Chief Justice of Canada. A participant in the important decisions of the Supreme Court during the 1980s, he continued the liberal tradition of his predecessors Bora Laskin and Brian Dickson, particularly in matters relating to the Canadian Charter of Rights and Freedoms until his resignation in Aug 1999.

Nevertheless, in February 1993, in a case involving the protection of the rights of homosexuals, he argued that the key to interpreting the Constitution is to determine Parliament's intention at the time it passes a law. Since Parliament deliberately did not make such rights explicit in the Human Rights Act, they are not therefore guaranteed.