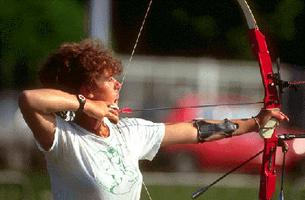 As a fighting and hunting weapon, the bow and arrow was widely used in prehistoric times and throughout the Middle Ages. Archery became a recreational sport in England in the 15th and 16th centuries, after the decline of the bow and arrow as a military weapon.

There are 2 general types of longbow: the ordinary, straight-ended bow and the recurved bow. The latter (made of laminated wood, plastic and fibreglass) is most commonly used in archery competition, of which the most popular forms are target archery (shooting at a standard-size target) and field archery (shooting at targets at random distances in the field).

In Canada, archery clubs were formed in the mid-1800s. In 1864, in Ontario, the Yorkville Archery Club staged a tournament, the first record of archery as a sport in Canada. Little is known about organized competition until 1927, when the Canadian Archery Association (later Federation of Canadian Archers) was formed. The FCA remains the national governing body for Canadian archery.

The first Canadian championships were held in 1931. Ontario was the principal archery province for some years, and it was not until 1951 that the CAA became truly national.

Canadians have done well in international competition. A team was first entered in the 1963 world championships, and the Canadians placed 5th in 1967. Dorothy Lidstone became the first Canadian to earn a world title - the 1969 women's world target archery championship.

The 1982 Championships of the Americas were held in Canada for the first time, in Joliette, Québec. Lisa Buscombe, of Brampton, Ontario, became world field champion in August 1984 in Finland, and on 28 July 1985 won the gold in a field archery event at the World Games in London, England. Canada won a silver medal in individual competition and a team bronze in the 1987 Pan-Am Games. Canada hosted the World Archery Championships for the first time in 1997, and achieved 3rd place in the men's compound team event.

Canada's most successful archer in recent years is Dietmar Trillus, who has amassed numerous national titles and international placings, including a FITA World Cup gold medal in 2008.