Armand J.R. Vaillancourt, sculptor (b at Black Lake, Qué 3 Sept 1929). He studied at the École des beaux-arts in Montréal. An inventor of new techniques, he uses modern materials such as welded metal. He sees himself as a sculptor and social activist, committed to the battle to free Québec's political prisoners. The symbolic figurative elements in some of his work stems from this conviction: a hand outstretched to the sky is a sign of despair, an expression of social injustice. The intensity of his symbolism lies in the interaction of the formal tensions of his works and is reinforced by their gigantic form. In wood or bronze, the play between his triangular, tubular or cubic geometric forms reflects strength and compression, mass and dynamism.

Armand Vaillancourt has produced many sculptures for particular settings, including Québec libre, a fountain sculpture (1969-71) Embarcadero Plaza, San Francisco; and Justice! (1983), Palais de Justice de Québec, Québec. More recently he has progressed towards a smaller scale in an effort to harmonize sculpture with nature. He has also developed a working approach full of spontaneity, thus allowing himself to be closer to the public while creating his art pieces in situ. Vaillancourt examines social issues in his art, promoting causes that are dear to him such as justice, equality and the survival of races. Armand Vaillancourt lives in Montreal. 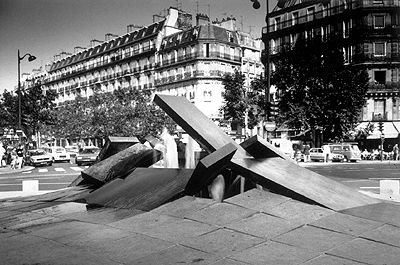 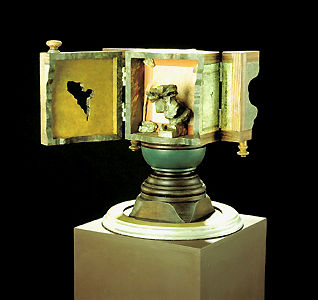