Slocum was the first man to sail solo around the world (courtesy the Old Dartmouth Historical Society/New Bedford Whaling Museum).

Nova Scotian Joshua Slocum, master mariner, set sail from Boston on April 24, 1895. He arrived home on June 27, 1898, the first person to sail alone around the world. Along the way he had a great many adventures.

Slocum was proud to be a Nova Scotian, people he described as "hardy, robust, and strong. He claimed that he had been "charmed...from the first by "the wonderful sea. He sailed on many ships, commanding several. In 1892, at loose ends, Slocum pondered seeking a new command, which were few and far between, or working at the shipyard, which required a steep association fee. An old acquaintance solved his dilemma by offering him a boat, which wanted repairing.

The boat was an old sloop, only 12 m long, called the Spray. According to the locals it had been built "in the year 1." People were amazed that Slocum was rebuilding it. His work on the boat was punctuated by the pithy observations and dire warnings of many a seasoned sailor. Slocum ignored the Spray's detractors. He had found a new love in the decrepit craft. 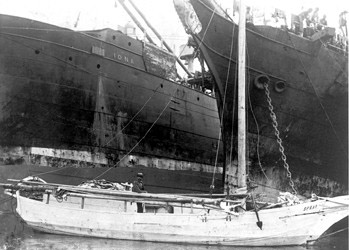 Finally, the little ship was ready and Slocum set sail. He had intended to sail to Gibraltar, up the Mediterranean, through the Suez Canal, down the Red Sea and east around the world. He was persuaded by British naval officers at Gibraltar to alter his course and proceed westward because of the many pirates on both coasts of the Mediterranean. Reasoning that one could circumnavigate the globe in two directions, Slocum turned about.

However, he was soon accosted by pirates. A huge wave swamped the pirates' boat, a felucca, and Slocum managed to escape. It was the first of many adventures and narrow escapes.

Off the coast of Uruguay, having hugged the coast too closely, the Spray ran aground. In attempting to lay out the anchor in his frail lifeboat, Slocum found the anchor and cable too great a load. After several attempts the dory was full to the gunwale with water and sinking. Slocum managed to throw the anchor clear as the boat overturned, remembering only then that he couldn't swim. He finally made the beach, exhausted and half-drowned. But the episode had a happy outcome. Local villagers brought the coast guard and traded him butter, milk and eggs for ship's biscuits.

Throughout the progress of his journey, Slocum met old friends and made new ones, trading for supplies as he went. One such trade with "a good Austrian of large experience yielded Slocum a bag of carpet tacks, which turned out to be "of more value than gold.

As Slocum advanced around the tip of South America, the Spray ran straight into a gale that sent the boat sailing backward. Through mountainous seas, the ship was blown along the southern coast of Tierra del Fuego. Slocum had no choice but to continue eastward, completely around Tierra del Fuego. He would have to cross the entire Strait of Magellan again.

On his second approach, he met a gang of Fuegians calling out "yammerschooner, an indication that they wished to "converse. Forewarned about the ferocious renegades, especially their leader "Black Pedro, Slocum knew better than to allow them close to the sloop. He drove them off by firing a shot across the bows of their canoes. For several days the natives continued to approach the sloop. Finally, exhausted and needing to sleep, Slocum devised a unique warning device to alert him to interlopers. He spread the carpet tacks, "commercial end up, across the deck, knowing that "one cannot step on a tack without saying something about it. When the Fuegians attempted to board the boat around midnight, there was indeed "a deal of free language over it.

Slocum's voyage remains a remarkable feat of seamanship. Slocum was not a "boat bum. Despite having only a grade three education, he was an accomplished writer known for his dry wit. His book, Sailing Alone Around the World, is a delight to seafarers and landlubbers alike.